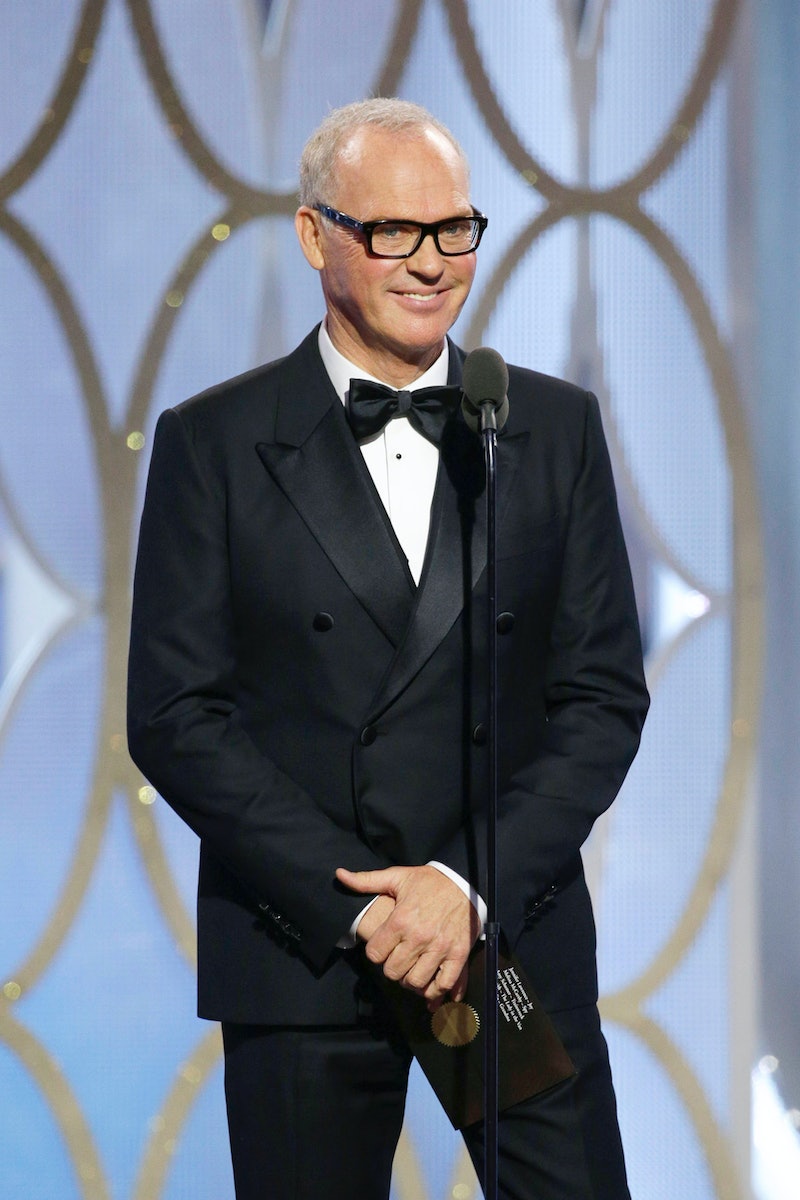 Yikes, it appears that a certain mistake keeps popping up at the 2017 Golden Globes. Not once, but twice, the movie titles Hidden Figures and Fences got lumped together as "Hidden Fences" — a movie that does not actually exist. In response, "Hidden Fences" memes are circulating Twitter, proving that this mix-up is not OK. The blunder first happened when Jenna Bush Hager interviewed Pharrell on the red carpet. Then, when Michael Keaton was presenting an award, he said the same incorrect title. Bustle has reached out to NBC and Keaton's rep for comment, but neither immediately responded. A personal rep for Bush Hager could not immediately be reached.

These mix-ups may have been because of a teleprompter gaffe or simply accidents, although that remains unclear. Regardless, Hidden Figures and Fences are two distinctly different movies. Hidden Figures tackles the story of three African-American women who played a key role in launching NASA's space program. Meanwhile, Fences is based on a 1987 play about an African-American family in the 1950s. It may just be a coincidence, but the fact that both movies feature strong black actors as the leads makes the flub all the more disappointing — as if it's too hard to tell the two apart.

While this mix-up hasn't yet been addressed during the show itself, Twitter definitely is not letting the blunder slide. Intentional or not, "Hidden Fences" combines two movies that are each worthy of their own spotlight. Here's a roundup of the best memes making their way around the internet that highlight the ridiculousness of such a mistake.

No, this isn't a real movie poster, but you'd think it was, based on how often this fake movie got mentioned.

This meme perfectly sums up the frustration.

That VMAs quote never gets old.

Highlighting the absurdity of the mix-up, some began combining other black movie titles.

Like the previous example, this one combines The Help with the TV show How To Get Away With Murder.

More like this
Twitter Is Overjoyed By Angela Bassett’s Record-Making Oscar Nomination
By Maxine Harrison
Twitter Is Saying The Same Thing About Beyoncé's Renaissance World Tour
By Shahed Ezaydi
Kukulkan From 'Wakanda Forever' Has A Surprising Connection To Marvel History
By Grace Wehniainen
Michaela Coel Has Some *Thoughts* About The Nepo Baby Discourse
By Maxine Harrison
Get Even More From Bustle — Sign Up For The Newsletter
From hair trends to relationship advice, our daily newsletter has everything you need to sound like a person who’s on TikTok, even if you aren’t.