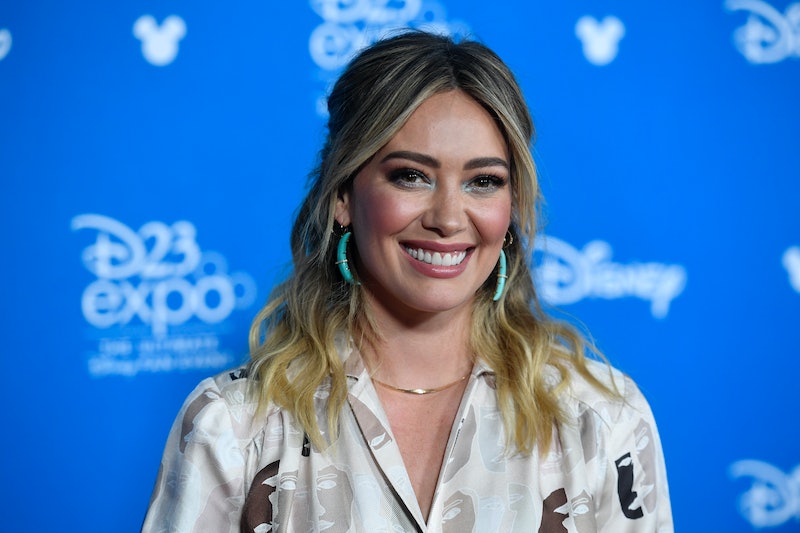 Hilary Duff and her television alter-ego Lizzie McGuire have been millennial icons for years. So it's no wonder that now, a younger generation is discovering the show for themselves, starting with Duff's very own children. Over the weekend, Hilary Duff watched The Lizzie McGuire Movie with her kids, educating them on how cool their mom was back in 2003.

Duff's fiancé, Matthew Koma, posted a video to his Instagram story on Sept. 29 of a family movie night. But it wasn't just any movie they were watching, no, this family was enjoying The Lizzie McGuire Movie in all its early 2000s glory. "Family viewing of Lizzie McGuire movie," Koma wrote over the video, which Duff later reposted on her own Instagram story.

Based on the clip Koma shared, it looks like they were just getting started on their viewing, as fans will recognize the first scene of the film, where Lizzie is getting ready for her 8th grade graduation, while goofing around and singing to "The Tide Is High." Koma's story shows Luca, Duff's seven-year-old son, looking attentively at the screen. Even their daughter Banks, who is 11-months old according to ET, appears hooked to the screen. Duff and Koma, however, are less taken by the movie itself, as the two laugh in the background.

This isn't the first time Luca has been introduced to his mom's iconic TV character. In an interview with People, after announcing the Lizzie McGuire sequel series at D23, Duff revealed that Luca has actually started watching clips of the show on YouTube. "He got really into it and then he’s like, ‘I’m done,'" she shared. "I think he’s pretty fascinated to see me so young, not looking the same. He knows that’s his mom but he got over it fast. It’s pretty funny, he’s not there yet.” Based on the video Koma shared, it seems like Luca is still very much enthralled with his mother's career as a child star. In fact, Duff revealed in the same interview that he's also a fan of her music, telling People, "I think that he thinks I'm cool now... I'll take that for as long as I can have it."

It was important for the actor to share Lizzie McGuire with her son. "I feel like I need to let him know that this was the show that started it all for me and what’s gonna happen when the second phase of that is happening,” she explained to People.

Luca is only just beginning to grasp his mother's fame. In June of 2017, Duff recounted the day Luca found out that she was a celebrity during an appearance on Good Morning America. "When he got home [from school], he is like, 'I know your name,' and I was like, I know. And he's like, 'No, no, your name is Hilary Duff and I'm like, caught," she shared. "He said it with a little glint in his eye like somebody told him something that I haven't, and I'm like, No! I'm not ready for this yet."

Based on their movie night viewing, it seems that now Duff is more than ready to share that part of her life with her kids.