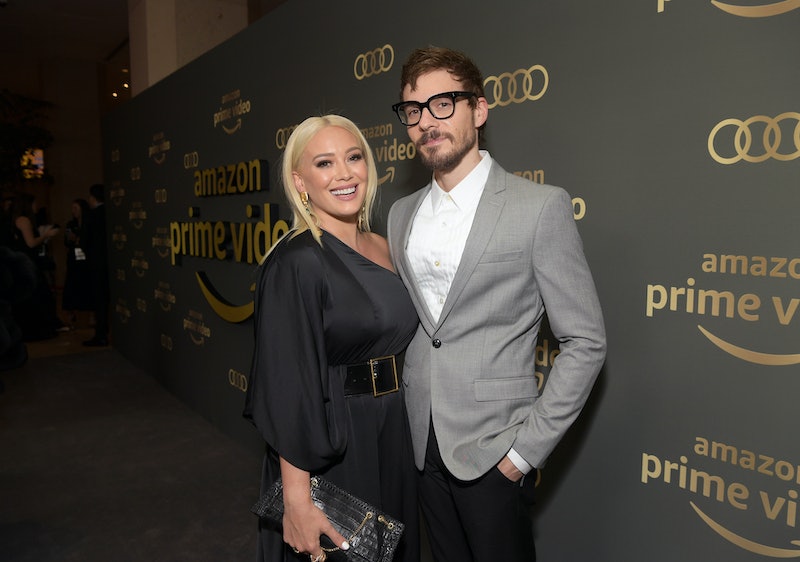 While you may still be spinning from the camp looks at the 2019 Met Gala, there's even more style news. This time, however, it's less about someone dressing up as an IRL Barbie and more about a massive piece of jewelry. On May 9, Hilary Duff's engagement ring made its Instagram debut when she and now fiancé Matthew Koma announced that they'd gotten engaged. Honestly, you've got to see this massive, square cut diamond ring the former Disney star is rocking on that special finger.

In an Instagram post from the morning of May 9, Hilary Duff and boyfriend Matthew Koma announced their engagement. The Younger star posted two images. The first shows Duff and Koma posing with Duff's new bling on full display, and the second shows them sharing a sweet kiss. While that's nice and all, it's the ring you've got to see because it's gorgeous.

While Duff didn't offer details about the ring (because that'd be low key weird), fans can make out that the new jewelry appears to be a square cut diamond in a relatively minimalist setting. Honestly, though, with a major rock like that, there were no extra details needed.

In her post, Duff wrote, "He asked me to be his wife," with a heart icon. Koma also took to his social media to announce the engagement writing, "I asked my best friend to marry me," and tagging Duff.

Both fans and fellow celebrities were quick to celebrate the pair on their social media posts. Instagram comments from Ashley Tisdale Lea Michele, and Duff's sister Haylie rolled in. While Duff may currently be starring on Younger, her fans were quick to bring in the Lizzie McGuire references, and honestly, they were on point. The most popular? Comments that read, "This is what dreams are made of."

Comments on Koma's post were markedly less McGuire-centered, but Duff herself did comment with an adorable, "Thanks for the promotion babe" message.

If only early 2000s Lizzie could see Duff now.

See? It's a popular reaction.

Then, there are the early 2000s tears which are so real.

According to People, Duff and Koma have been dating since early 2017 but took a short break from one another just a few months later. However, the pair reunited in September 2017 and have been together ever since. Then in June 2018, the pair announced that they were having a baby, and in October, their daughter Banks Violet was born.

As for when Duff and Koma will get married, it's probably a little early for that planning to begin. For now, though, fans can continue to celebrate Duff's engagement and stare at that massive engagement ring. Hopefully, Duff and Koma will post more photo so fans can see an even better photo because that ring looks next level.