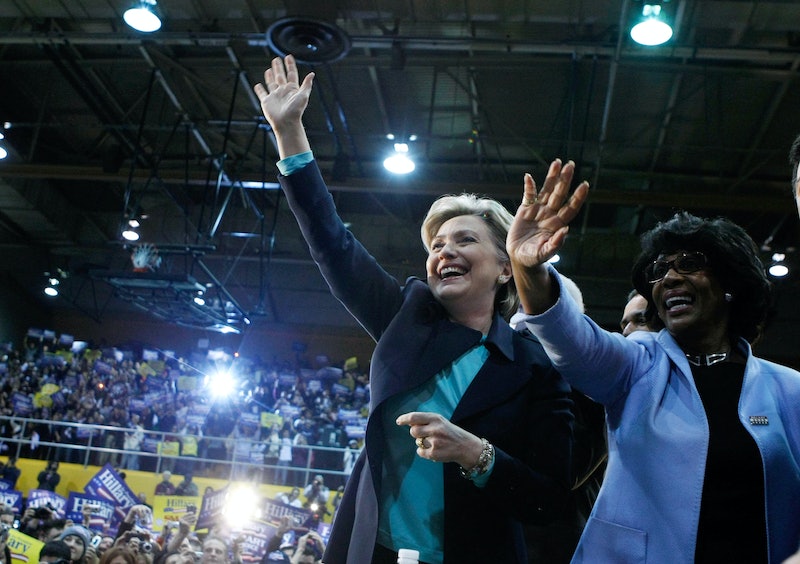 During her closing remarks at the Professional Business Women of California conference on Tuesday, Hillary Clinton defended April Ryan and Rep. Maxine Waters (a veteran White House Reporter and California Representative, respectively) who each encountered stunningly ignorant criticism for "simply doing their jobs." Citing the way Press Secretary Sean Spicer scolded Ryan for "shaking her head" and how Bill O'Reilly made fun of Waters' hair instead of engaging with her comments during a recent address to the House of Representatives, Clinton denounced the incidents as "indignities" that far too many women — especially women of color — are forced to live and work around in their professional lives in order to do their jobs.

"Too many women, especially women of color, have had a lifetime of practice taking precisely these kinds of indignities in stride," Clinton said. "But why should we have to?"

It's an obvious thing, condemning the system that forces marginalized women to smile and continue working through obvious disrespect. However, the fresh-out-of-the-woods former Secretary of State's no-nonsense comments should serve as a springboard — reminding us to go beyond diagnosing the problem and instead actively work to dismantle it.

Now, this cannot be another case of celebrating a privileged white woman for repeating what women of color have been talking about forever on a stage in front of a bunch of #FearlessGirl capitalists (because seriously that's a hard no). It should, however, be seen as an opportunity to use Clinton's mainstream platform to center these women's experiences (reading #BlackWomenAtWork is a great place to start), to commend and celebrate their resilience (Hello, Maxine!) and, of course, to critically examine the ways our culture forgives the men who silence and ridicule women rather than acknowledge them as their equals.

Admittedly, it's easy to take a stand when Bill O'Reilly tries to derail Maxine Waters' valid concerns about the POTUS with a racist attempt at playing fashion police or when Sean Spicer throws a temper tantrum because April Ryan uses her face and/or neck muscles in a way that upsets him. When conservative caricatures pre-write their SNL cold-opens, it's not all that brave of an act to condemn them. However, when something like this happens in your workplace, when you witness these moments IRL and have the opportunity to publicly deem them unacceptable — that's when there's opportunities to take action and maybe ensure that another women won't need to grin and bear the indignity.

As Clinton closed her remarks, she wisely noted that "any woman who thinks [these behaviors] couldn't be directed at her is living in a dream world." For anyone still occupying that world, it's not too late to wake up.