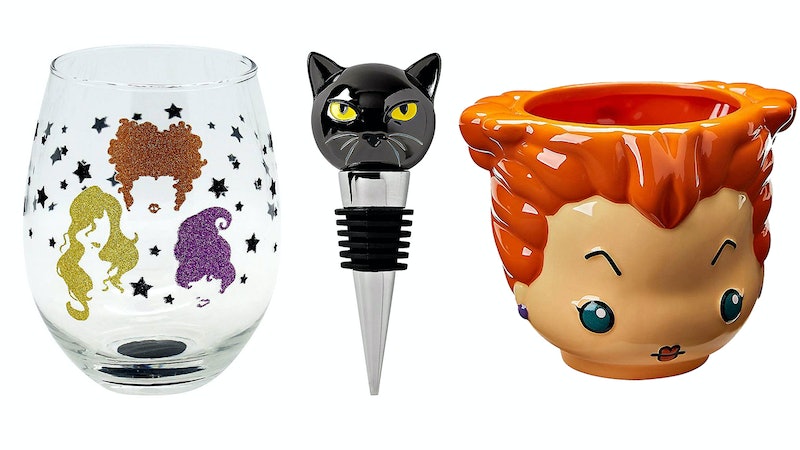 Oh, look. Another glorious Halloween collection released before summer’s barely over. To paraphrase the great philosopher Winifred Sanderson, hopefully this one won’t make you sick. In 2017, Spirit Halloween launched a Hocus Pocus collection to feed our ‘90s baby souls. In 2018, they brought it back again. Because three is without a doubt a charm, it appears Spirit Halloween has brought back their Hocus Pocus range for a third year, introducing some new products in addition to faves from a few years.

Last year, Hocus Pocus turned 25 years old. The movie is chock full of quotable lines and scenes that stole your whole childhood. On such scene almost didn’t happen at all. As producer David Kirschner told Bustle last year, the “I Put a Spell On You” musical number was nearly cut from the movie. “When I heard that they were going to do that, I was so concerned. I just thought, ‘You’re going to ruin the movie,’” Kirschner told Bustle. “This is a movie that puts you on the edge of your seat and you’re going to stop it for this musical number?” Anyone who’s seen the scene knows it far from ruins the film. “I’m a billion percent wrong,” Kirschner said. “I love seeing how wrong I was about it."

If you want to start getting in the ooky spooky spirit and don’t feel like waiting for Freeform to start playing the movie on a loop in October, you can rent Hocus Pocus on YouTube, Amazon Prime, or iTunes. In the meantime, let your wallet run amuck, amuck, amuck!

More like this
Andie From 'How To Lose A Guy In 10 Days' Is A Total Gemini
By Nina Kahn
12 Years Ago, Austin Butler Manifested His Oscar Nom In This Disney Movie Scene
By Jake Viswanath
Rupert Grint Just Shared A *Major* Update About Ron Weasley’s Future
By El Hunt
Sandra Bullock’s Razzies Speech Proves She’s The Ultimate Miss Congeniality
By Sam Ramsden
Get Even More From Bustle — Sign Up For The Newsletter
From hair trends to relationship advice, our daily newsletter has everything you need to sound like a person who’s on TikTok, even if you aren’t.