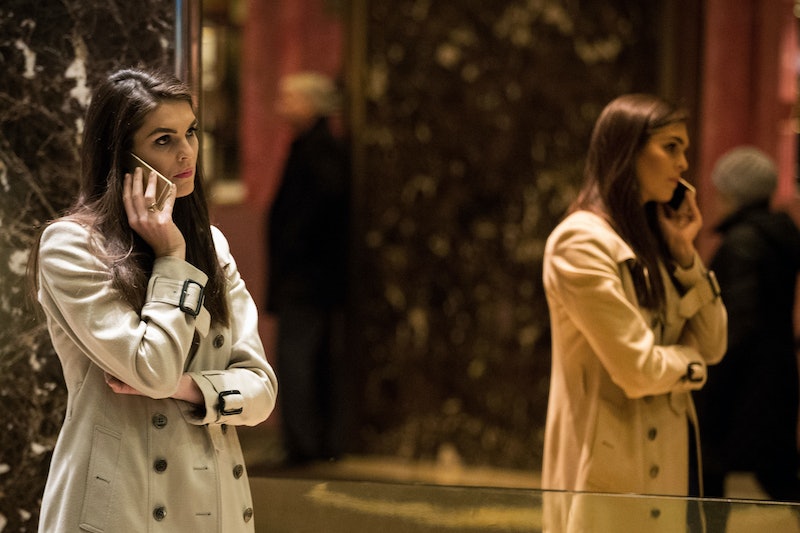 One of Trump's most trusted confidantes is also one of the highest paid. As White House communications director, Trump assistant Hope Hicks earns the highest salary bracket of the president's staff. The annual salary report for the White House executive office shows that the 29-year-old makes $179,700 a year — a paycheck that matches that of other senior members on Trump's team, including adviser Kellyanne Conway and former chief strategist Steve Bannon.

Hicks is notoriously private. The young Trump aide grants few interviews and doesn't have a public social media account. This behavior is a stark contrast to her Twitter-loving boss or her predecessor, financier Anthony Scaramucci. Known as "The Mooch," Scaramucci had been on the job for only days before his expletive-laden interview in The New Yorker led to his firing.

But Hicks' attempt to stay out of the public eye will likely become harder, thanks to the recent bombshell report by The New York Times that connects her to the Trump-Russia probe. The newspaper reported that a former spokesman for Trump's legal team, Mark Corallo, is expected to talk to special counsel Robert Mueller about Hicks and Donald Trump Jr. emails. The email exchange sets up the mysterious 2016 meeting at Trump Tower between a Russian lawyer and Trump Jr., Jared Kushner, and Trump's former campaign chairman Paul Manafort. According to Corallo, in a previously undisclosed conference call, Hicks had allegedly promised Trump Jr.'s emails "will never get out."

As most reporters know, it's not my practice to comment in response to questions from the media. But this warrants a response. She never said that. And the idea that Hope Hicks ever suggested that emails or other documents would be concealed or destroyed is completely false.

Trump Jr. confirmed the meeting referred to in the emails did take place, but denied accusations that his father's campaign team colluded with the Kremlin for information on Hillary Clinton that would hurt her 2016 election run. Trump Jr. claims he did not know what the meeting was about.

What Hicks has to worry about, however, is when Mueller will summon her for questioning. It's a fate that seems inevitable now with the allegation Hicks promised to conceal evidence. The emails and the Russian meeting are key points in the Mueller probe. Should Corallo's alleged story ring true, a grand jury could find Hicks guilty of obstructing justice. Hicks could risk lying to the FBI, but that's a crime severe enough to send her to prison.

According to the New York Times report, three people were on the conference call: Corallo, Hicks, and President Trump. Unless Corallo has a recording of the phone call, it will be his word against theirs.

Twitter is already abuzz with speculation that Hicks will turn on Trump to cooperate the investigation. Hicks' loyalty to Trump helped make her one of his most trusted allies. She previously worked as a public relations representative (and occasional model) for Ivanka Trump's fashion line. Although she had no political experience, Donald Trump gave her a job as a press secretary. Since then, she has stayed by his side, all the way up through her promotion to White House communications director.

When she became Trump's right-hand woman, Hicks entered a life of traveling via private jet, living rent-free in a Trump-owned apartment, and helping Trump post his tweets. White House staff members refer to the Hicks as the president's "daughter," wrote journalist Michael Wolff, author of the controversial book Fire and Fury: Inside the Trump White House.

If Hicks reveals any damaging dirt to Mueller's investigators, it could be a major blow to Trump and the next big development in the U.S-Russia investigation.

More like this
Watch Jacinda Arden’s Devastatingly Honest Resignation Speech
By Sam Ramsden
What The UK Blocking Scotland’s Gender Recognition Bill Means
By Sam Ramsden
Kim Kardashian Gives “Bucket List Dream” Lecture At Harvard
By Alyssa Lapid
Man Meets Politics: ‘Boy Meets World’ Star Ben Savage Is Running For Congress
By Jake Viswanath
Get Even More From Bustle — Sign Up For The Newsletter
From hair trends to relationship advice, our daily newsletter has everything you need to sound like a person who’s on TikTok, even if you aren’t.