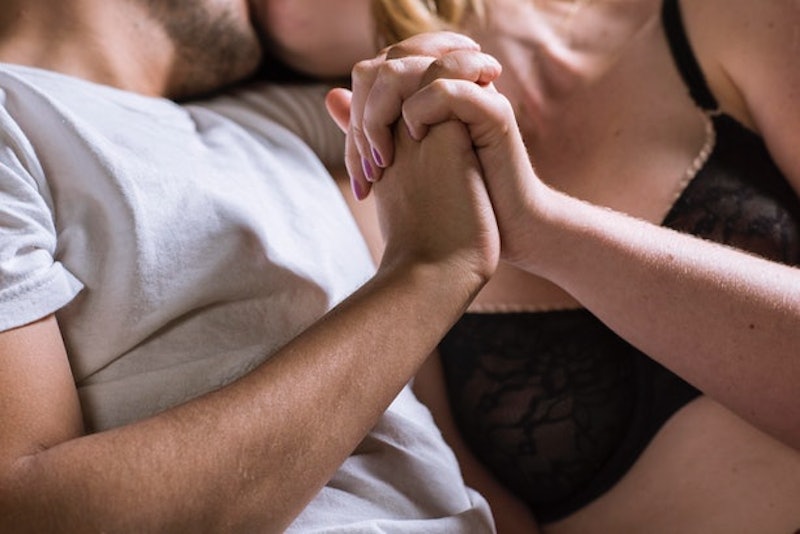 At some point, you may have heard that there’s a correlation between sex and sleep, the former helping the latter, and with good reason. Whether you know this from personal experience or from studies you have read, when you think about it, the science behind the sex/sleep link makes sense. The next time you are tossing and turning and looking for a sleep remedy, before you reach for some Melatonin or a book, you may want to consider sex instead. Yes, according to some research, sex can help you sleep. Recently, Laurie Mintz, Ph.D., wrote an article on sex and sleep for the University of Florida.

Dr. Mintz is a licensed psychologist and a psychology professor at the university. She is also the author of Becoming Cliterate: Why Orgasm Equality Matters—And How to Get It and A Tired Woman’s Guide to Passionate Sex. In her recent article, she pointed out that one in three American adults do not get enough sleep, according to the Centers for Disease Control and Prevention (CDC), and that people are concerned about their sex lives. She cited findings from an article titled “Prevalence and risk factors of sexual dysfunction in men and women” in Current Psychiatry Reports, which stated sexual dysfunctions affect approximately 43 percent of women and 31 percent of men. Furthermore, women tend to have sleep issues more than men, according to the National Sleep Foundation.

“Sex and sleep are highly related,” Dr. Mintz tells Bustle. “A good sexual encounter releases hormones that help you sleep better. A good night’s sleep results in you feeling more frisky — interested in and ready for a fun sexual encounter. Conversely, lack of sleep is going to make you too tired for sex, and there’s some evidence that lack of sex can be a contributor to sleepless nights.”

How Sleep Affects Your Sex Life

“Getting a good night’s sleep can increase desire,” Dr. Mintz says. “A recent study in The Journal of Sexual Medicine found that the longer women slept, the more interested in sex they were the next day. Just one extra hour of sleep led to a 14 percent increase in the chances of having a sexual encounter the following day. Also, in this same study, more sleep was related to better genital arousal.”

Dr. Mintz is not alone in her theory about sex helping you sleep. Various studies have come up with similar findings. For instance, one was a survey among 460 people aged 19-to-70 years old conducted by Michele Lastella, Ph.D., a sleep researcher at Central Queensland University’s Appleton Institute for Behavioral Science in Adelaide, Australia. It found that sex before bed helps you sleep — as long as you have an orgasm, which releases oxytocin, of course.

With everything you have to juggle in life, sex may sometimes take a back seat to other priorities, for better or worse. You may be fine with sex not being a priority — everyone is different in how much sex they need and want, and there is no “right” or “wrong” amount of sex. However, if you do want it to be more of a priority, here’s what you can do, according to Dr. Mintz, whether you feel you are too exhausted for sex or just haven't been focusing on it.

“This is one of the top complaints women bring to sex therapists,” Dr. Mintz says. “It is, indeed, an issue that they can fix, and I’ve seen many people do so with the right tools and information. For instance, think about sex as something to do to take care of yourself and that you enjoy. Often, when people are too tired for sex, they’ve begun to think of sex as a chore they have to do rather than something they love to do. Remember all the health benefits of sex, too.” Of course, this doesn’t mean you have to be in the mood for sex 24/7. You should never force yourself to have sex when you're not feeling it. But, if you’ve started to think of sex like a chore like Dr. Mintz says, and want things to change, then it may be time to switch things up.

What You Should Do If You Have Trouble Sleeping

Even though Dr. Mintz specializes in sex issues, not sleep ones, per se, she advises that someone with sleep issues should go see a doctor to make sure the issues don’t have an underlying medical cause. “Most medical and psychological providers will also recommend good sleep hygiene, including going to sleep at the same time each night, waking at the same time each morning, and having a bedtime routine that does not involve the use of smartphones.”

In fact, on that note, to help keep your smartphone away from you, Bagby is a sleeping bag for your phone, so you and your significant other can both pay *less* attention to your phones and *more* attention to each other, to sleeping, or both.

Dr. Mintz has one primary suggestion for getting a good night’s sleep: Sex. “Of course, given the fact that there’s evidence that the hormones released after orgasm can result in sleepiness, having a sexual encounter (by oneself or with a partner) before bed can do wonders!” Once again, this doesn’t mean to force yourself to have sex if you’re not feeling it, but it is good to have options when it comes to sleep remedies, and sex seems like a fun, viable one. So the next time you cannot sleep, perhaps having sex will help — you never know unless you try.