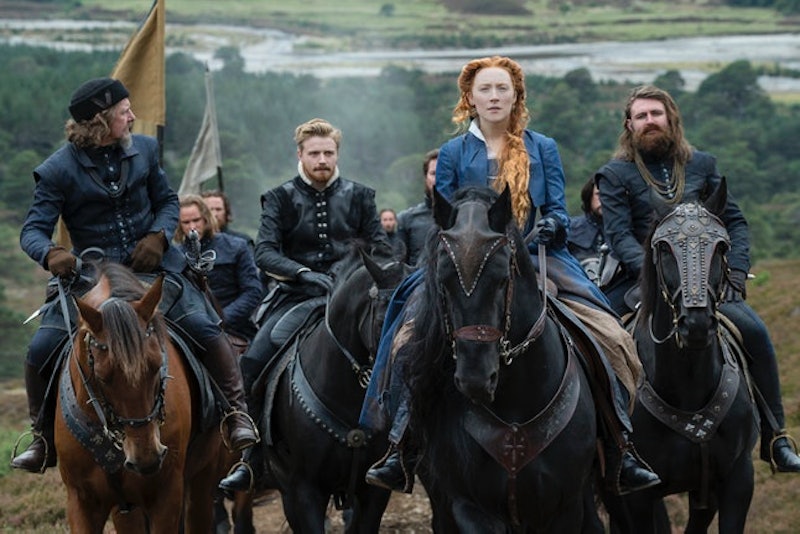 Maybe it's the recent royal wedding or the impending specter of Brexit, but for some reason, historical biopics about the British monarchy are all the rage at the moment. From Netflix's series The Crown to the new film The Favourite, people just can't get enough of the British royal family. And those fans will soon have a new obsession, thanks to the upcoming biopic Mary Queen of Scots, opening widely on Dec. 21, which tells the tale of the titular monarch and her feud with her cousin, Queen Elizabeth I. The film is surely high on drama and intrigue, but just how accurate is Mary Queen of Scots compared to the real story?

The film is pretty accurate, for the most part. It's based on a prominent biography of Mary, Queen of Scots: The True Life of Mary Stuart, by Dr. John Guy, and mostly sticks to the facts (Guy acted as a consultant on the film). Here's the film's official synopsis from its website, and as you can see, it reads more like a history lesson than a movie description:

"Queen of France at 16, at 18 Mary Stuart (Saoirse Ronan) is widowed, defies pressure to remarry, and instead returns to her native Scotland to reclaim her rightful throne. By birth, Mary has a rival claim to the throne of Elizabeth I (Margot Robbie), who rules as England’s Queen. Contrary to earlier accounts, and based on Dr. John Guy’s research, we see Mary as a capable politician and leader who wanted an alliance with her cousin Elizabeth. Mary fights to govern her unruly kingdom at a time when female monarchs are reviled as monstrous. To secure their thrones, the two Queens make very different choices about marriage and children. Mary’s reputation is under continual attack from her enemies, who construct lies about her sexual conduct. Betrayal, rebellion and conspiracies within each court imperil both Queens — driving them apart, as each woman experiences the bitter cost of power."

And while the film does mostly tell the truth about the war between the forces of Elizabeth's England and Mary's Scotland, as well as the correspondence between the two monarchs and Mary's long quest to supplant Elizabeth's place on the English throne, the movie does divert from the historical record in one very significant way.

The film features a major scene (which is shown partly in the trailer and therefore shouldn't be considered a spoiler) where Mary and Elizabeth come face to face to hash out their issues with each other and attempt to resolve the war being fought in their names. It's a key scene to the film, but nothing resembling it ever happened in real life. Mary and Elizabeth famously never met, they only ever corresponded via letters and messengers, so the film invented this scene from whole cloth as an added layer of drama and to give a chance for its two stars to share the screen.

Other than the addition of the fictional meeting between Queens Elizabeth and Mary, Mary Queen of Scots paints a largely accurate portrait of two of the most famous and complex monarchs to ever rule Britain — and it will likely only add to the current popularity of British royal biopics.