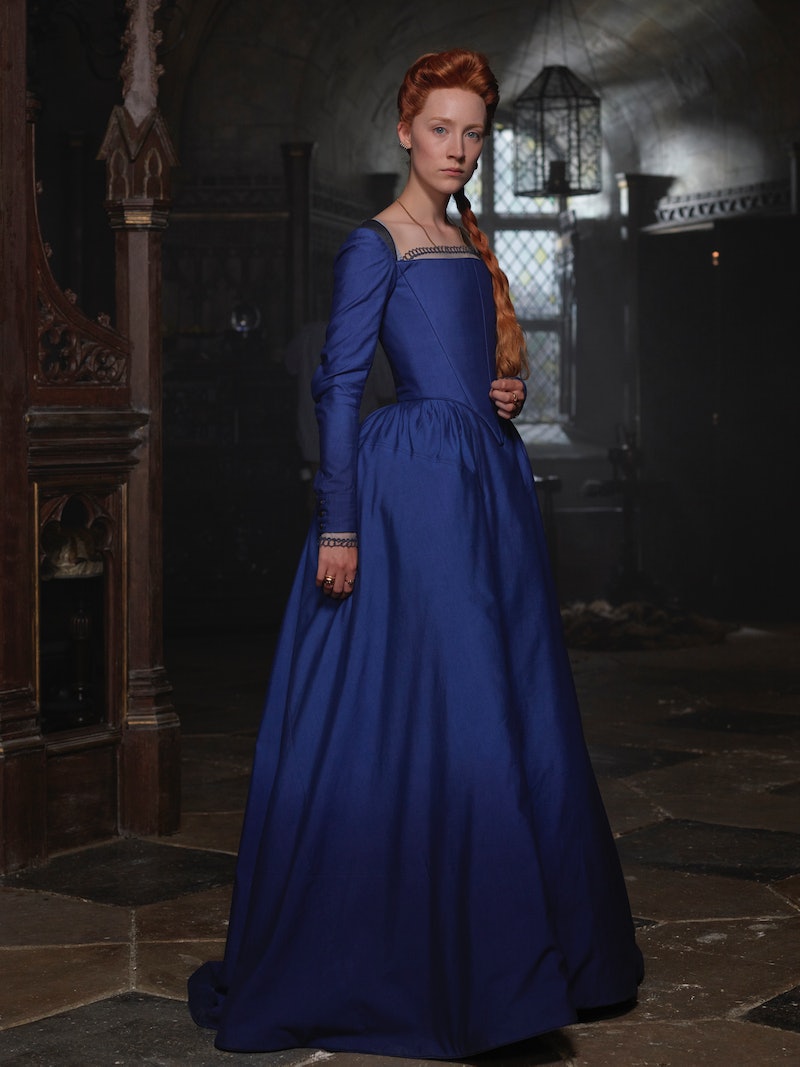 Going into any historical film, audiences know that they always have to take things with a grain of salt. Not everything on screen is going to be the absolute truth of a story, and history can be rewritten in any number of ways to make a movie more intriguing. Just take the new film Mary Queen of Scots, starring Saoirse Ronan and Margot Robbie. When the first trailer dropped on July 12, Tudor experts and history buffs alike wasted no time pointing out one glaring historical inaccuracy that put the whole movie into question. But what seems, at first glance, to be major mistake might actually be an intentional way of giving the film an extra feminist boost.

In the movie, out in December, Ronan stars as Mary Stuart, daughter of Scotland's King James V, who became Queen of Scotland at six days old. Robbie plays the more well-known Elizabeth I, daughter of King Henry VIII and his second (beheaded) wife Anne Boleyn. The trailer offers some shots of lovely, sweeping countryside, scandalous plot intrigue, and commentary on women ruling in a man's world, and it culminates in the two women arguing face-to-face about their legitimacy, their countries, and who outranks whom. But the thing is, that scene is totally fictionalized, as cousins Mary and Elizabeth never actually met in person.

Although the two queens exchanged a number of letters over the course of their lives, historians agree that, though they had the opportunity, they never met. As the National Museums of Scotland details, Mary left Scotland quite young and married Francis, heir to the throne of France. She became Queen of France at 16 and, when Francis died, a widow at 18. She then returned to her home country of Scotland, which had been ruled for years by regents. Many of her Scottish country folk embraced her, their Catholic queen, while a growing Protestant citizenry of Scotland opposed her.

Though the two women initially supported each other as cousins, Elizabeth knew Mary was a threat. The mess created by Henry VIII's Acts of Succession, his break from the Catholic Church, and multiple divorces fills textbooks, but the ultimate conclusion was that many saw Elizabeth as an illegitimate queen, with Mary's roots as granddaughter of Henry VIII's sister making her the more worthy legitimate ruler. However big of a threat Mary was to her reign, Elizabeth opted to never meet her cousin in person.

There are a number of reasons why the people behind Mary Queen of Scots (which include a female director, Josie Rourke, making her feature film debut) would choose to invent a scene of confrontation between the two queens. There's little doubt that they all know that these women had never met, as screenwriter Beau Willimon's script is based on the biography by Tudor expert John Guy, with Guy serving as a consultant on the film. The fictionalized scene likely boils down to a simple reason: to have such powerhouse, Oscar-nominated actors like Ronan and Robbie star in a movie and never put them in a scene together would be a wasted opportunity.

And the invented scene, however inaccurate it may be, enhances the movie's feminism and female focus. Though Mary and Elizabeth would both have ladies in waiting and female friends with whom they'd converse, much of the political and strategic maneuvers that the two queens would have to oversee would come with a lot of grand-standing from male advisors. As the Mary Queen of Scots trailer shows, though they both held incredible power, Mary and Elizabeth were not trusted by all of the men surrounding them. Gaslighting and sexism surely affected both women's lives time and time again, and that will no doubt be a feature of the movie.

So having these two powerful, assured, and regal women in a scene together give the movie a bit more of a feminist kick than it otherwise would've. Rather than sticking with history and leaving Mary and Elizabeth to be constantly lectured by men, Mary Queen of Scots is giving the ladies a private moment where their own intelligence, emotions, and intentions can be laid out for one another. Sure, it's phony, but who cares? It makes the movie more exciting, and helps it pass the Bechdel Test. Though the test isn't the be-all-end-all of female empowerment in cinema (movies can be feminist without passing), it's always a plus when two women in a film have something to talk about other than a guy. Why not royal inheritance, war, and the rule of one country over another?

Aside from the fictionalized moment of two queens meeting, hopefully Mary Queen of Scots doesn't delineate too much from the actual history. After all, Mary's life was so full of drama and intrigue that the story needn't veer off the deep end in order to make things interesting. But whatever is included or excluded in Mary, Queen of Scots, there's one thing for certain: its two talented lead actors are going to be amazing in these roles and give the history books a much-needed lesson in feminism.