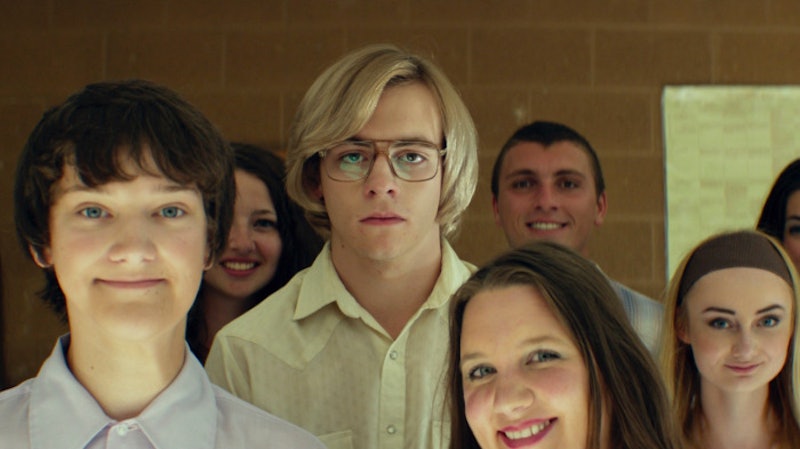 Pop culture's current obsession with true crime continues with the new film My Friend Dahmer. The movie is about serial killer Jeffrey Dahmer, one of the most infamous murderers in U.S. history. In 1992, Dahmer was convicted of killing 17 boys between 1978 and 1991, boys which in many cases he had also raped and eaten in addition to murdering them. The new film doesn't focus on those heinous crimes, but rather shows what Dahmer was like in high school, before he became a murderer and cannibal. But just how accurate is My Friend Dahmer? Does it get the details of Dahmer's early life right, or is it a fictional origin story for the notorious serial killer?

The film certainly strives to for accuracy in its depiction of Dahmer's teen years. My Friend Dahmer was both written and directed by Marc Meyers, who based the film upon the graphic memoir of the same name by cartoonist John "Derf" Backderf. Backderf was actually one of Dahmer's best friends in high school, and catalogued his experiences in the acclaimed comic, which was nominated for an Eisner Award. Backderf also appears as one of the main characters in the film, portrayed by Alex Wolff opposite Ross Lynch's Dahmer.

Backderf's account of the adolescent Dahmer in his comic includes instances of his then-friend showing up to school drunk, obsessing over a local jogger, and acting out by pretending to be handicapped — all scenes that are depicted in the movie as well. "It [will be] a lot like the book," Backderf told Rolling Stone's Bryn Lovitt of the film. "Where you go into it expecting a certain thing and you get to the end and it's something completely different. It's not a slasher film — it's a very melancholy tale full of regret and remorse that shows this young kid spiraling into madness."

Director Meyers also looked for other ways to make the movie as authentic as possible, including shooting much of it in the Akron, Ohio neighborhood where Dahmer grew up — including the house he lived in — and making sure all props were correct for the time period. "I wanted to look further into the walls of the home life to see how that was contributing to his own teenage experience," Meyers told Movie Pilot's David Opie. "We shot everything in Akron where these kids grew up, including Dahmer's actual childhood house. That's the house which you see in the film. We even rebuilt the hut on the exact same spot where Jeff originally had his hut up in the woods on the property. Then we found a high school in the area that still resembled the '70s, one that hadn't really changed, and the woods hadn't changed either. The vehicles and the costumes were the biggest obstacle in bringing it back to '78."

So with the subject matter and setting closely mimicking the real history behind the film, all that was really left to pin down were the performances, and all indications are that they are quite true to life as well. Anne Heche portrays Dahmer's mother in the film, and she and Lynch tried to emulate their characters both physically and personality-wise, leading to an eerily believable mother-son dynamic. "I took pictures of her behavior, her body language, just how I wanted her to be, so that Marc [Meyers] felt confident that we could shoot," Heche told Clark Collis of EW. "I got a call from the costume designer after Marc had given her the pictures, and she said, 'You’re not going to believe this, you and Ross [Lynch] stand exactly alike.' What’s so interesting is that, the darkest we got in our shame and in our self-loathing, it translated to our bodies being and looking the same in our posture."

My Friend Dahmer shows what Jeffrey Dahmer was really like before he became a serial killer, and thanks to the recollections of one of the people who knew him best, and the efforts of the director and cast to paint an accurate portrayal by using every resource at their disposal.