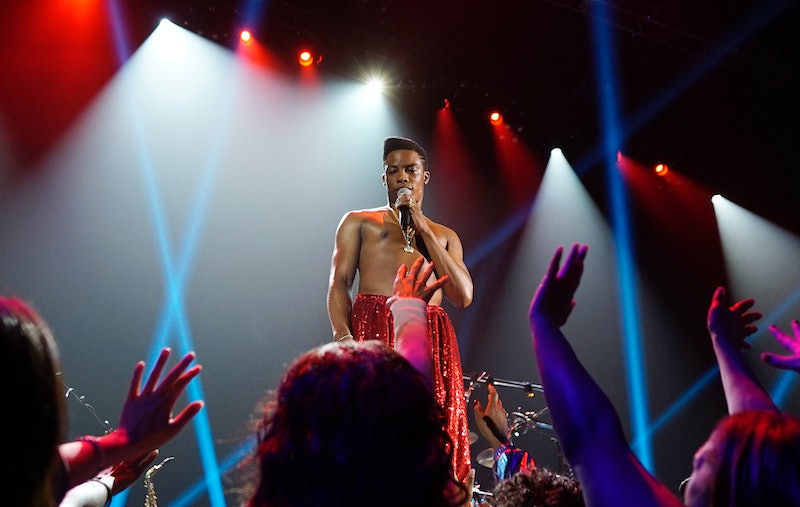 First as tabloid fodder and now dissected in documentaries, the relationship between Bobby Brown and the late, great Whitney Houston has long fascinated the general public. Just this July, the Whitney documentary hit theaters, with full plenty of outspoken support from Houston's family. Now, her ex-husband and R&B star Bobby Brown is going to tell his own version of events with a two-part miniseries on BET called The Bobby Brown Story, which premieres on Tuesday, Sep. 4 at 9 p.m. E.T. But just how accurate is The Bobby Brown Story?

Bobby Brown himself co-produces the series, so you can be sure that he, at least, signed off on what you see on screen. As of the time of publication, Houston's family had yet to comment on the documentary.

As the title suggests, The Bobby Brown Story focuses on the life and career of Bobby Brown during the time of his marriage to Whitney Houston, which lasted from 1992 to 2007, as well as some of the fallout that occurred after it ended.

The Bobby Brown Story is actually a follow up to The New Edition Story, which premiered Jan. 24, 2017. That documentary, in which actor Woody McClain first stepped into Brown's shoes, charts the rise of Brown's R&B group New Edition from it's youthful beginnings 1981. According to Deadline, the series drew record viewership for BET with 29 million viewers tuning in during the premiere week, and the show being the most talked about on Twitter and Facebook for all three nights in which new episodes aired. Deadline reviewer Erik Pedersen guesses that this has something to do with why The Bobby Brown Story got the green light in the first place.

Makeda Easter of the LA Times also noted that screenwriter Abdul Williams took inspiration from Brown's own memoir, Every Little Step, published in 2016. Easter wrote that while some of the incidents in the book are absent from the miniseries, the scene in which Houston is high on cocaine on her wedding day with Brown, is true to the version of events in Brown's book.

During the press tour for the series, one reporter asked Brown about the reports that he domestically abused Houston in front of their daughter, Vulture reported. Brown responded by denying that any such incidents ever took place. "There was no violent incidents between me and Whitney." When another reporter read from the report of the 911 phone call available in the public record, Vulture reported, Brown responded by saying "The public record is wrong." This event seems to confirm that the movie event will largely be Brown's subjective take on their relationship.

The reviews of the series have been mixed. LA Times reviewer Lorraine Ali indicated that the story seems to be accurate enough for one it is: a dramatized retelling of one man's version of events. "How accurate is “The Bobby Brown Story”?" she writes. "It’s hard to say because facts and history are pliable when viewed through tabloid media accounts, pop music lore and the memories of those who lived the dream-turned-nightmare."

Deadline's Dominc Patton calls the series "manicured BTS," implying that the show is a sanitized version of what actually happened between the famously troubled couple. He dubs it "a redemption tale, for better and worse. The latter is a cautionary note that comes sometimes in such authorized biographies at the expense of the dirty truth."

With such a complicated history involving so many different accounts of events, audiences will probably never get a version of the Whitney Houston and Bobby Brown story that is 100 percent accurate. Whether you believe The Bobby Brown Story in its entirety or not, it's his prerogative to tell it.