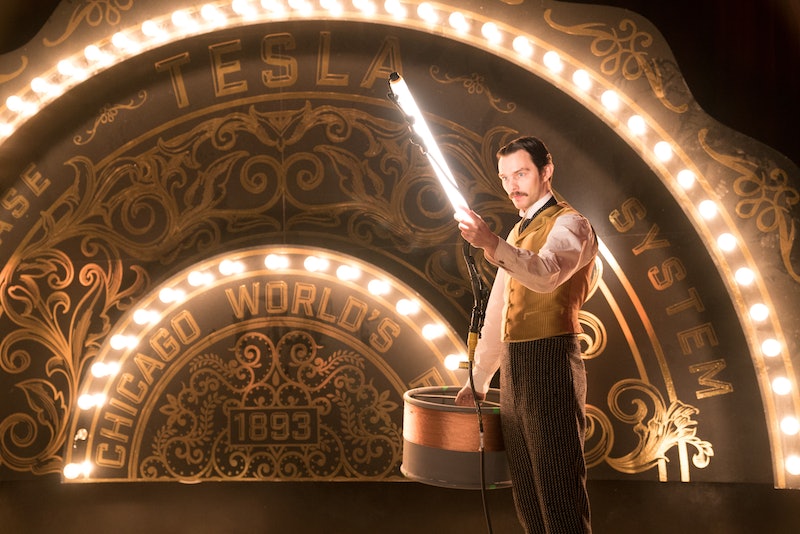 The late 19th century battle over what type of currents should be used for indoor electricity becomes high-stakes drama in The Current War. The film, out Oct. 25 after a two-year shelving, tracks the race to bring electricity to every home, involving Thomas Edison (Benedict Cumberbatch), George Westinghouse (Michael Shannon) and Nikola Tesla (Nicholas Hoult). But how accurate is The Current War to what really went down as the Earth prepared to glow?

The conflict at the heart of the movie is referred to as the War of the Currents, and it took place in the late 1880s and early 1890s. In the simplest terms, it involved Edison and Westinghouse competing over whether home and business power should be transmitted with direct current (DC), as Edison wanted, or with alternating current (AC), which Telsa and Westinghouse wanted. The Department of Energy explains that DC, which moves only in one direction, was not easily convertible to higher or lower voltages, while AC was convertible using transformers, making it more convenient.

While Edison and Westinghouse were the ones who owned competing companies, Telsa was involved with both of them over the years. According to History, Tesla worked for Edison's company when he first moved from Serbia to the United States. Tesla was developing AC technology, but Edison wasn't interested. After quitting his job with Edison in 1885, he sold his AC patents to Westinghouse in 1888, which was when the war really got going.

The Department of Energy explains that during the conflict, Edison spread propaganda to convince people that AC was dangerous. In the end, though, Westinghouse and Tesla won out. With AC being cheaper than DC (and not actually as dangerous as Edison made out), they were awarded the role of lighting the Chicago World's Fair in 1893, and then were given a contract from the Niagara Falls Power Company to use Tesla's technology to general power from the waterfalls. Meanwhile, through a merger, Edison's company became General Electric, which did start using AC. Alternating current is what is still used today for home and business electricity.

The movie shows all of this playing out, so it's accurate in the broad sense of telling the story how it actually happened. But, there were some elements added to make the story more cinematic. For example, Director Alfonso Gomez-Rejon explained during a press conference at the Toronto International Film Festival that a part in which Westinghouse (Michael Shannon) invites Edison (Benedict Cumberbatch) to a party was invented. Also, screenwriter Michael Mitnick said that while Westinghouse did fight in the Civil War, a dramatic moment involving a gun was a creation for the film.

That said, one of the more disturbing moments in the movie is true to life. Edison really did electrocute animals using AC in attempts to convince people it was dangerous. These experiments led to Edison's involvement in the development of the electric chair using a Westinghouse AC generator, according to History. Per The Smithsonian, Edison secretly bankrolled the development of the chair, which used Westinghouse's AC current, as a tool to turn public opinion against the other man. He even suggested that the process of execution by electricity be called being "Westinghoused."