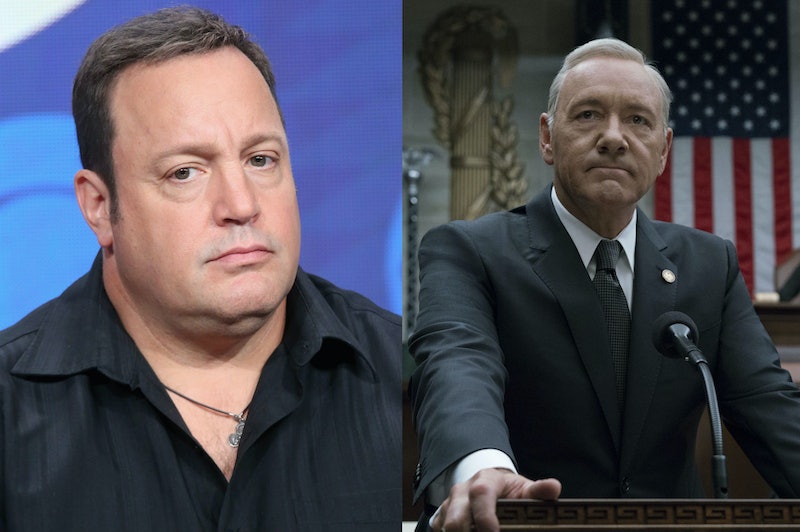 The news about Kevin Spacey's alleged history of sexual harassment and assault is no laughing matter, but fans of House of Cards are proving they will happily watch the show without Spacey in the most creative way possible. One intrepid fan named Robbie Pyma started a petition to replace Spacey on House of Cards with Kevin James. And it sounds like a brilliant plan to the 22,000 and counting people who have signed the Change.org petition so far. If Pyma reaches 25,000 signatures, the petition will land on the desk of Netflix CEO Reed Hastings — and while it probably won't lead to the comedian setting up shop in Frank Underwood's old office, it will make a point that House of Cards has the potential to be a better show without Spacey in it. Netflix had no comment for Bustle regarding the petition.

Right now, House of Cards is scheduled to end with Season 6, and Netflix has cut all ties with Spacey. However, the addition of James could keep the series going for years to come. The Paul Blart: Mall Cop actor is a little busy with his CBS sitcom Kevin Can Wait, but surely James could multitask. As the petition reads,

"Losing a great show is hard, no matter the circumstances. However with hardship come the opportunity for a great show to become one of the greatest television shows of all time. I think Kevin James can elevate "House of Cards" to a globally adored franchise like "Game of Thrones" and make the entire world focus on one of the most important Netfix Original series there is."

Just imagine James delivering monologues about the dark side of politics directly to the camera and try not to smile. A James-led House of Cards is the show the world needs right now, and if Netflix wants to just slide James in as if Spacey was never there, all the better.

Before you start questioning whether or not James is qualified for the role, remember he's already played the President of the United States once. In the 2015 classic adventure comedy Pixels, James played President Will Cooper, who helped save the world from giant video game monsters that invaded Earth from outer space. What did Frank Underwood ever do for the world besides murder people and generally make things awful? Absolutely nothing.

Honestly, if Netflix wants to forget Frank was ever a thing, that works too. James is a versatile actor who could play any role thrown at him. Since Claire is the current president on House of Cards, James could be her vice president, or perhaps her bodyguard. In True Memoirs of an International Assassin, James proved he has what it takes to be an action hero. As Claire's right-hand man, he could be the moral compass of her White House (let's face it, the White House is going to need one), who would eventually be led astray by the powerful people in D.C. — hey, this is still House of Cards, after all.

Just as important as James' versatility is the fans' willingness to accept him as part of the show. House of Cards fans have proven that they're totally here for James joining the cast with their signatures and supportive tweets.

The people have made their voices heard. They want to live in a world where James stars in House of Cards, and that world sounds pretty great. Say what you will about James, but the man knows how to make people laugh. He's protected malls, a zoo, and even the fictional United States. His devotion to making America a funnier place is commendable.

Listen to the fans, Netflix, and make James the star of House of Cards. He's the Frank Underwood people need right now.