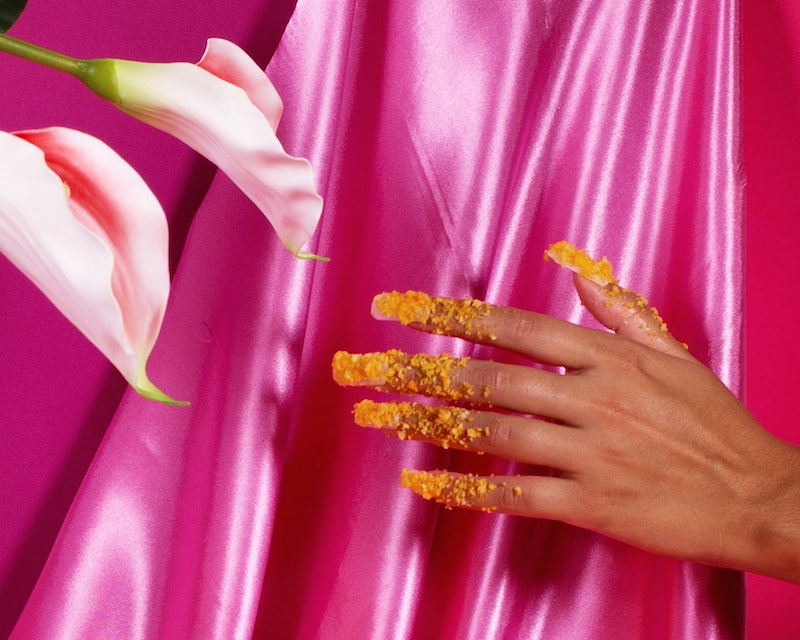 In July 2017, Miami-based artist Yakira Valerio suddenly got her period while on a three-hour drive from Havana, Cuba to Viñales. She had to pull over at a gas station on the side of the road, which charged for things like toilet paper and access to the bathroom, due to lack of resources. Valerio explained her situation in Spanish and luckily received toilet paper free of charge. "I had tampons on me," Valerio tells Bustle, "but it brought to my attention the struggle of having your period in a foreign country that lacks certain resources."

That prompted Valerio to explore "the problems that we go through during menstruation," she says, which led to her latest exhibition, "Anything You Can Do I Can Do Bleeding." Valerio curated the menstruation-themed show for World Money Gallery in Brooklyn. It will open Friday, Sept. 29, until Sunday, Oct. 1.

She also decided to use this upcoming show as an opportunity to give back to the women who have been displaced following the devastation of Hurricane Maria and the 8-magnitude earthquake in Mexico. They are currently in desperate need of resources, so Valerio is asking attendees of the art exhibition to bring "pads, tampons, underwear, or pantyliners," according to the event's Facebook group. "We will be collecting all weekend to send to victims of the natural disasters in Puerto Rico and Mexico."

Not only was Valerio's experience in Cuba in July eye-opening, she also experienced Hurricane Irma firsthand while in Miami in August. "I was in the middle of the panic that the city went through," she says, "clearing out CVS's and grocery stores, so we saw a lack of resources here as well."

She was in the process of curating the show when the storm hit. "I just focused on menstrual supplies after I researched about it and there's a lack of supplies in India and Africa [among other countries], and Puerto Rico and Mexico are in urgent need right now."

"They're American citizens, and they deserve any resource any other state would receive."

Valerio worked with artists of all mediums to create the "pop-up pussy installation," as she calls it, and asked 28 of her friends to create pieces for the show. "It'll feature some films, some illustrations, photography, writing, a lot of mixed media, and even some edible pieces," she explains. One of the artists is a baker and will make Blood Orange jam for the event.

Each artist chose one of 28 prompts provided by Valerio, multi-disciplinary designer Melissa Deckert explains to Bustle. She and designer and illustrator Nicole Licht collaborated on a piece together for the show. Their prompt was: "'You can lessen actual period cramps by taking painkillers ahead of time — don't wait until you're a ball on the floor,'" Deckert says. "With that we decided to make a feminine self-care haven, complete with Cheetos snacks and face masks to soothe a lady in pain."

Considering President Donald Trump's response to the disaster has not been enough — for instance he could ask Congress to pass a Puerto Rico relief package, which would direct more funds to the U.S. territory — Valerio considers this the time for individuals to do what they can to help women who've been affected by natural disasters. "They're American citizens," she says of Puerto Ricans affected by the storm, "and they deserve any resource any other state would receive." She adds that, "Something as simple as lifting a shipping [ban] or allowing supplies to go straight to Puerto Rico instead of the U.S. would help."

What she's referring to when she mentions the shipping ban is the Jones Act, which requires that all shipping between ports in the United States must be done by U.S.-owned and U.S.-built ships operated by U.S. citizens. This has prevented Puerto Rico from getting the urgent aid the country needs. "They shouldn't have to wait for it," Valerio says. "It shouldn't be as complicated as it is now."

She recognizes that this show is an opportunity to make an impact, however small it may feel. "All I can do is work locally, and get as much as I can gather from the people surrounding me. It’s better than anything else that I can do really. It’s kind of my best solution, helping in a bigger way."