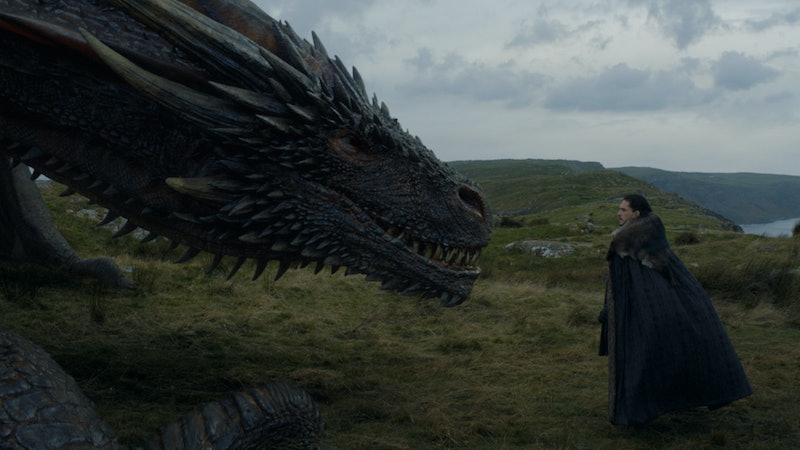 Now that fire and ice, in the metaphoric form of Jon Snow and Daenerys Targaryen, have met — fans are theorizing that ice dragons might appear on Game of Thrones. How is that even possible? How are ice dragons made? If the legendary creature does appear on the HBO series, its origin is of interest.

While fans of the show only might not be familiar with this concept, George R. R. Martin's books offer a little more information about ice dragons. Like most magical things that were laughed off by the Stark family before becoming integral to their lives, Old Nan used to tell stories about ice dragons. There is also a constellation in Westeros that is called the Ice Dragon, which you'd also know about if you've played the Game of Thrones Tell Tale video game, which expands the fictional world of the series.

They are said to have blue eyes, like White Walkers, and translucent wings. Jon thinks about their cold breath often, and he would daydream about about a cold weather dragon. The legend seems to posit that they are literally made of ice, with snow breaking off of them as they move. In George R. R. Martin's short story The Ice Dragon, which predates A Song Of Ice And Fire but seems to be set in the same universe, the remains of an ice dragon form a pond. If that is the case, then they are probably formed by some kind of anthropomorphic magic — like the ability to turn an inanimate object like ice into something alive.

There is even a theory that the Wall itself is a sleeping ice dragon, or at least has one hiding inside of it.

Perhaps there is some kind of freeze ray north of the Wall. Perhaps this is just another species, and they are born from eggs of ice, similar to the ones Daenerys received. It's also possible that the same magic that turns humans into White Walkers can be used on dragons. If they have blue eyes like the Night King and his cronies, that could be a clue as to how they are formed. Or, if ice dragons are the scaly equivalent of a wight, a fire-breathing dragon would have to die first.

Just as Game of Thrones ultimately revealed how big direwolves get, how warging works, how the Night King came to be, and how Crastor's sons were sacrificed and turned into White Walkers, if an ice dragon appears — it will likely have some kind of explanation on the series. Magical or biological, it is sure to be a sight to behold.