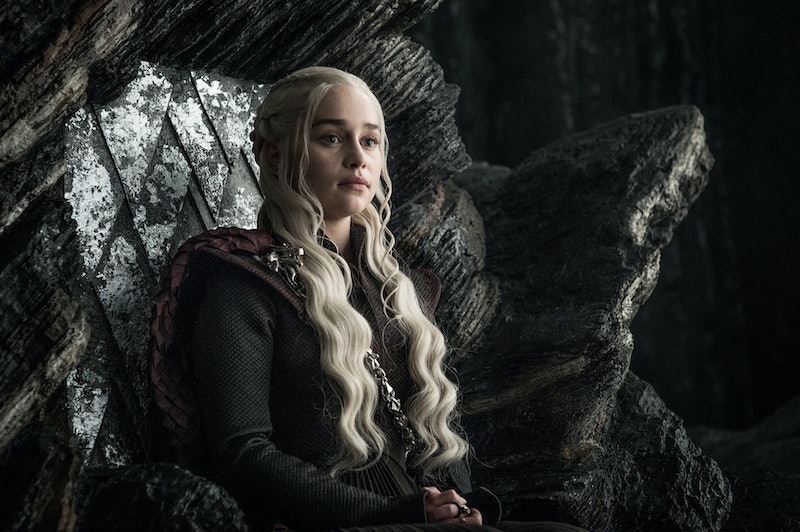 In "The Spoils of War," Daenerys unleashes her favorite dragon, Drogon, on the Lannister Army, and after seven long seasons of waiting, fans finally got to see a dragon take part in a proper battle. It was awesome, to say the least, and it's sure to lead to more dragon action to come, but that may not be good news for all of the khaleesi's children. Just as the Starks have lost most of their direwolves, Daenerys is due to lose one of her dragons. Despite being hit by an arrow from Cersei's ballista, Drogon is likely safe (for now). It's his brother, Viserion, who will die first on Game of Thrones.

Viserion has kept a low profile since hatching. He, along with Rhaegal, spends a long time chained in the catacombs in Meereen, before coming to Westeros. Meanwhile, Drogon roams free, and grows a considerable amount as a result. Simply because he spends so much time in the spotlight, Drogon's death would hurt both the audience and Daenerys more, but thanks to his terrible namesake, Viserion seems marked for death.

Remember, the Mother of Dragons names each of her children after an important figure in her life. Drogon is named after her late husband Khal Drogo, Rhaegal is named after her oldest brother (and Jon Snow's father), Rhaegar, and Viserion is named after Viserys — the brother who sells Daenerys to the Dothraki in Season 1. It's pretty much universally acknowledged that Viserys is one of the show's most loathsome characters, but Daenerys still loved her brother enough to honor him by naming one of her dragons after him. But in the process, she almost certainly doomed Viserion to an early death.

The fan theory goes that one of Daenerys' dragons will fall in battle, and be resurrected by the Night's King as an ice dragon. This theory goes hand in hand with the dragon rider prophecy. In the A Song of Ice and Fire books by George R.R. Martin, Daenerys has a prophetic dream where Rhaegar tells her "the dragon has three heads." This has led to the belief that all three of her dragons will have riders before the series ends, and that those riders will each have Targaryen blood.

Drogon and Daenerys' bond is already established, so it's unlikely anyone else will ever try to ride him. Then there's Jon, whose father is Rhaegar (even though he doesn't know it yet), who will likely end up riding Rhaegal, as a result. Some fans believe Tyrion is also a secret Targaryen, but that theory is becoming more and more unlikely. Narratively speaking, it makes far more sense for the Night's King to resurrect Viserion and ride him into battle than it does for Tyrion to suddenly be revealed as a relative of Jon and Daenerys'.

Game of Thrones loves to bring the pain, and few things would be more painful than for Daenerys to have to watch one of her beloved children fall into the hands of the Night's King. And since his namesake was a cruel, vicious character, Viserion going to the dark side would make sense in a weird way. It would also even the playing field a bit if both sides had dragons.

If the Mother of Dragons listens to Jon and heads North, then expect Viserion to fall in battle — if he rises as something else entirely, then you can't say you weren't warned.