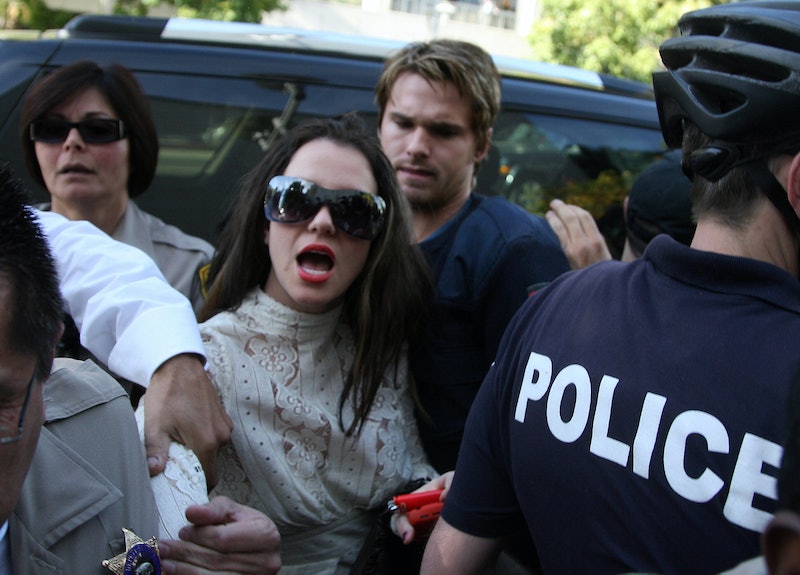 It's easy to remember the events surrounding Britney Spears' struggle with mental illness as quick, snapshot moments, rather than as an entire, singular event. There's Spears shaving her head. Spears attacking a paparazzi with an umbrella. Her disastrous 2007 VMA's performance. And the endless stream of photos showing Spears stumbling out of nightclubs. During this time, the world appeared to be utterly transfixed by the collapse of the princess of pop, in what a 2008 Rolling Stone cover story called, "the most public downfall of any star in history." We consumed even the most minute, banal details of Spears' public breakdown with a rabid voracity. This was a veritable all-you-can-eat junk food buffet in gossip form, and as a culture, it was making us sick.

In '07's "Gimme More," Spears' first comeback song, the singer appeared to address the greed with which tabloid news publications, and US society as passive voyeurs, were consuming her behavior and public unraveling. Song verses acknowledged an omnipotent crowd who "keep watching," and seem to bait for "more." And we were. We couldn't get enough. Seeing what Britney did next practically became a national sport.

If the mere sight of this beloved young woman shaving her head was shocking, then the sight of her continuing to act erratic and looking sleepless and exhausted while chased by armies of paparazzi should have been downright terrifying. Instead it was served to us as entertainment. Another installment in the ongoing saga of Spears as an inexplicable mess, rather than a troubled young woman requiring urgent medical intervention and legitimate help.

It was to the shock of nobody, then, when at the start of 2008, rumors started circling that Spears had been suffering from a psychological disease for years. As if anyone truly believed that Spears was simply going through a rebellious phase, rather than struggling with a severe mental disorder. Following an unsuccessful hospital trip in January '08, publications such as Today released allegations from unnamed sources that Spears had disorders like postpartum depression and bipolar disorder.

Meanwhile, some other publications took the next step and sought the expert diagnosis of psychiatrists who tried to determine Spears' problems from afar. In one single MTV article, for instance, three different doctors ruminated on what mental health issues Spears was suffering from. The comprehensive potential list included conditions such as postpartum depression, postpartum mania, post-traumatic stress disorder, unconscious anxiety, and bipolar disorder. Frustratingly, even "immaturity," was suggested in the piece as playing a part in Spears' concerning behavior. The notion of which eerily calls back to a time when women's mental health disorders were classified as "hysteria," and thus delegitimized by doing so.

In short, we hunted Spears down as an entire culture. We saw her teetering on the fragile edge of her own mind, and instead of responding pro-actively, or even with empathy, we instead sat back and just watched her struggle. We made inept judgement calls about her and her life and we formed harsh opinions based on images and speculation. All we saw was Britney, the showgirl, not Britney, the person. And through her illness, we expect her to still perform for us. On stage. On the streets. On red carpets and outside nightclubs. Frankly, it's a miracle she made it out of the whole grotesque situation in one piece.

Sadly, in the decade since Britney's public episode, we still respond to troubled celebrities, and their apparent mental health concerns, in the same way as we did with Spears. In the years leading up to the death of Amy Winehouse in 2011, for instance, we were all made privvy to the tabloid's relentless pursuit of the singer. Clearly troubled throughout the latter stages of her career, coverage of the singer fixated on the idea that Winehouse was "going to die." That it was simply a matter of time, and we were all apparently going to have to watch in morbid anticipation of that event.

Though the singer was open about her struggles with addiction and substance abuse, Winehouse also struggled with an eating disorder, and it was speculated she struggled with her mental health too. In spite of the risks involved in putting more pressure and public scrutiny on a young woman needing space, privacy, and recovery, Winehouse could barely move for paparazzi. Her every action was documented, ridiculed, and judged within news media. It could be suggested that, just as news media kept Spears in the spotlight to eviscerate and analyse her every move, the same was done for Winehouse. This was a vulnerable young woman turned into a commodity for the news media. She was made to be a tragic story, when she could have been a survivor.

We've seen similar media furors follow Amanda Bynes' struggles with mental health between 2012 and 2015, or even in the coverage following Aaron Carter's recent concerning behavior and public struggles with his own mental health. Last year we also saw how Kanye West's alleged nervous breakdown in 2016, and his concerning behavior preceding that moment, was covered by some outlets with a certain belligerence, sharing speculation that West was "crazy" and a "nut-job." Both of which are terms that nobody should ever be legitimately called in the middle of what could be a genuine mental health crisis.

The bottom line is that such issues are not portrayed with the severity or seriousness that they deserve in the media. The episodes experienced by celebrities like Spears, Winehouse, Bynes, Carter, and West are painful, and not something anyone should have to go through in the public eye. Not to mention covered with the sort of rapt enthusiasm that reduces a mental breakdown to just another part of a celebrities life that the public deserve complete access to. None of us are entitled to see, diagnose, or pass judgement on issues like that. None.

Mental illness isn't something that can be summed up and understood from round the clock tabloid reporting and paparazzi pictures. It isn't something we can all pass judgement on based on a snapshot, a performance, or erratic use of social media. It can't be cured by unseen experts or a televised, singular session with Dr. Phil. And it certainly isn't helped by being held under the thankless microscope of fame, for millions of people to dissect and analyse in the comfort of their homes.

But it's as simple as this, we keep on watching, and they give us more. In 2017, it almost certainly seems time to turn away, and let celebrities deal with their private anguish and mental disorders with as much privacy and dignity as they deserve.