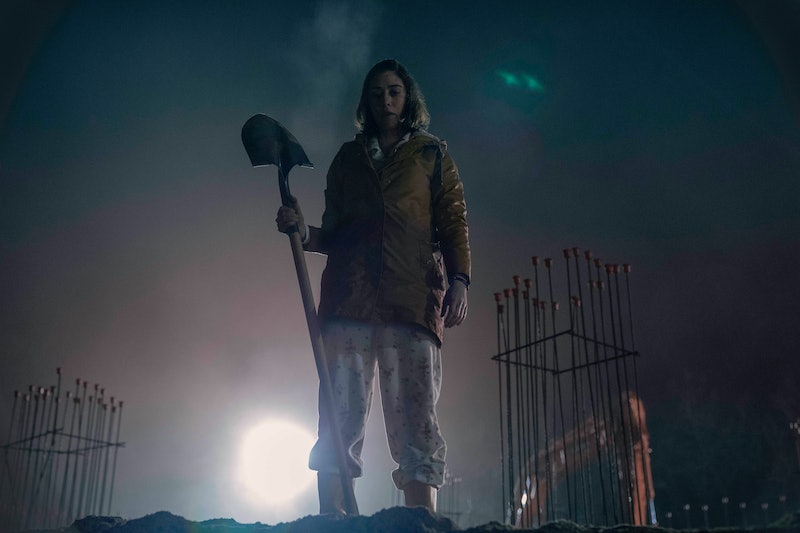 Minor spoilers ahead for Episodes 1-3 of Castle Rock Season 2. Though both seasons take place within the Stephen King universe (and in the same town), any connections between Castle Rock Seasons 1 and 2 are minor. As series co-creator Dustin Thomason explained to reporters at New York Comic-Con, Season 2 exists in the same timeline as Season 1, but is largely a new story.

Still, he teased there will be "some unexpected surprises later in the season when people sort of see some of its connections," and there are a few returning characters. One is is Pastor Drew, played by Aaron Stanton from Mad Men, and we'll also see more of Castle Rock's infamous Merrill crime family. Season 1 only featured a teen drug dealer named Dean Merrill, but Season 2 will introduce Pop, Ace, and Chris, as well as their junk store the Emporium Galorium.

This method of storytelling mimics the way King uses Castle Rock as a setting in his novels. While his stories often take place in the same fictional towns, they're often different in genre, and connected by small threads rather than major plot points. Occasionally, characters will crossover between stories, like Pastor Drew in the Hulu series. Thomason used the examples of Father Callahan, who appeared in both Salem's Lot and The Dark Tower, and Randall Flagg, who has appeared in at least seven of King's novels in various forms, to explain his and executive producer Sam Shaw's goals for these smaller links.

"Part of what we were excited by was the idea of introducing strands," Thomason said. "Maybe not always answering every question right away, but ultimately circling back in unexpected ways and hopefully broadening the universe over many seasons."

In the first three episodes of Castle Rock's second season, there aren't many connections to Season 1. Some of the teenagers that Joy Wilkes (the daughter of Misery villain Annie Wilkes, played by Eighth Grade's Elsie Fisher) hangs out with in Episode 3 talk about how Shawshank State Prison was shut down, but that's about it. A lot of the story actually takes place in the neighboring town of Salem's Lot, so there aren't that many opportunities for Season 1 and Season 2 characters to bump into each other. If they spend more time at the Mellow Tiger, a local watering hole in Castle Rock that unites many of King's stories, maybe that will change. But mostly, it's the tonality of the show that connects it to the first season. "I think that fans will recognize the Castle Rock of Season 2," Thomason said.

As the season progresses, more of those "strands" will start to emerge and maybe some lingering questions left over from Season 1 will get answered. Until then, fans will just have to keep their eyes peeled.