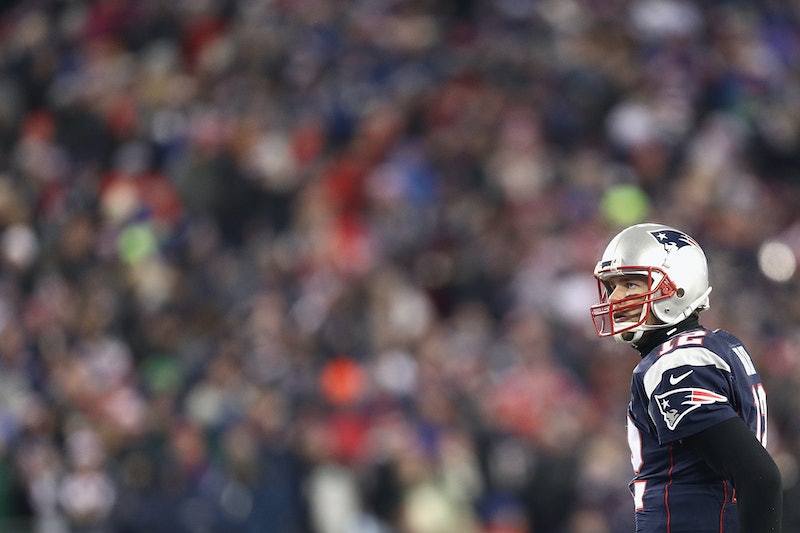 If you're curious about how Tom Brady and Donald Trump know each other, you're not alone. In 2002, Tom Brady was a guest judge at one of Trump's infamous beauty pageants. The years after were filled with golf trips and little fanfare surrounding their friendship. But in September 2015, months after Trump announced he was running for president, Brady was spotted with a "Make America Great Again" hat inside his locker and their 13-year friendship became headline-making.

While Brady may have become a political asset to Trump following the locker incident, this was not the first time Trump had used Brady's actions to help his campaign. Earlier that year, Brady faced accusations that he had deflated footballs and was suspended for four games. Trump quickly came to his defense through his typical method of response: a Twitter rant. While taking the time to explain that Brady was only in trouble because “People are so jealous of Tom Brady and the Patriots," he also took advantage of the opportunity to blast his, then opponent, Hillary Clinton.

When Brady was cleared to play, Trump made sure to remind everyone of his close relationship with Brady tweeting, “Tom is my friend and a total winner!” Soon after, in an interview with the Boston Globe, Trump mentioned his friendship with Brady again, as well as with Coach Bill Belichick and Bob Kraft of the Patriots. In case his admiration of Brady wasn't clear, he then reiterated, "Tom Brady, what a great guy he is."

Brady has also been complimentary of Trump. While confirming to WEEI's "Dennish and Callahan" he had a "Make America Great Again" hat in his locker, the quarterback wouldn't confirm who he was going to vote for but did say about Trump:

Honestly, he’s a good friend. … It’s pretty amazing what he’s been able to accomplish as an entrepreneur — a television star and now running for political office. People who can do those types of things and transition into different arenas and still have that type of appeal and carryover — he’s obviously appealing to a lot of people.

When asked his opinion on a Trump presidency Brady stated, "That would be great. There’d be a putting green on the White House lawn. I know that,” unaware of the fact the White House already contained one.

Are They Friends Now?

Fast-forward to present day and Trump has won the White House and use of its putting green while Brady is playing in his seventh Super Bowl this Sunday. At the Inauguration dinner on Jan. 19, Trump told the crowd Brady had just called to congratulate him.

While the Boston Globe reported Trump had told a group of supporters on election night that his friend Brady voted for him, Brady's wife Gisele Bündchen said she and her husband did not support him in an Instagram post.

This week, while conducting pre-Super Bowl interviews, Brady, along with the rest of the Patriots, was questioned by hundreds of reporters on Trump and Roger Goodell, the league commissioner who handed down the punishment after the "Deflategate" scandal, reports the New York Times. When the transcripts were released, any mention of Trump had been removed, signaling a move to keep football and politics separate.

While Brady may wish to "be excluded from this narrative" as Taylor Swift would say, it looks as though as long Trump sees his name as a plus for the administration, that outcome seems unlikely.