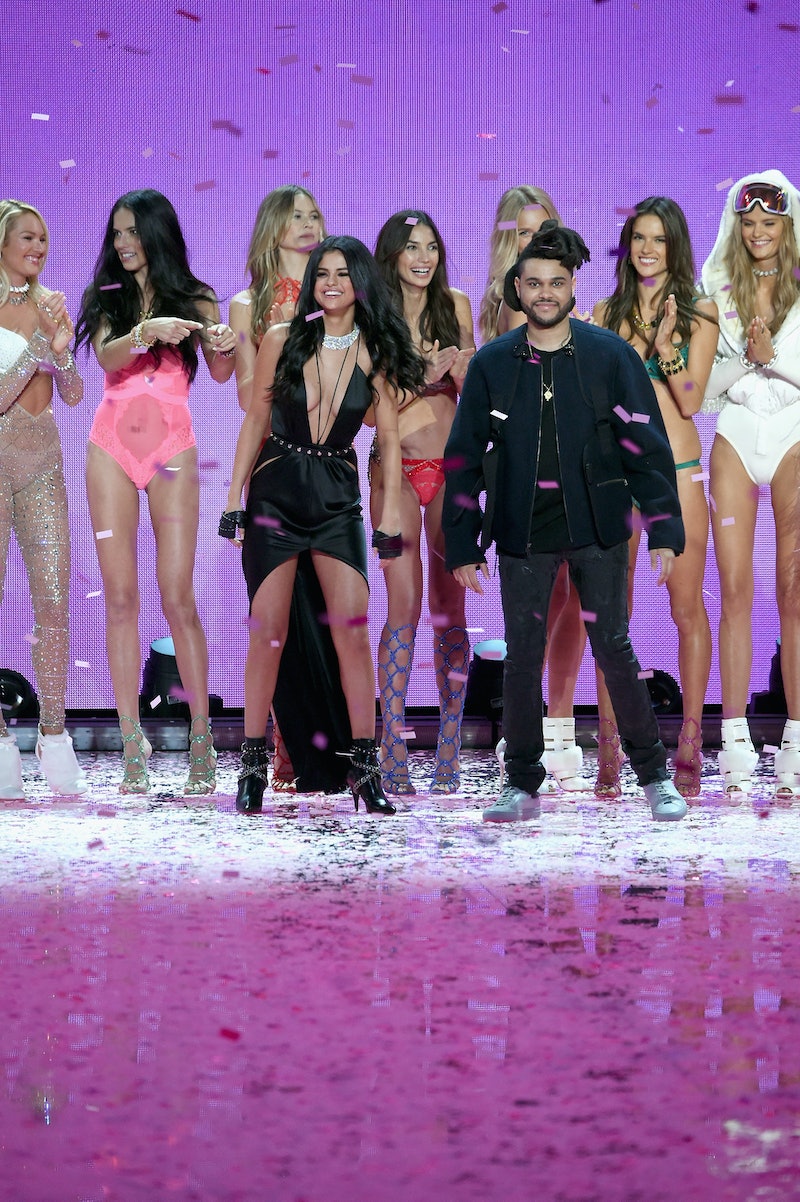 It looks like there may be a new surprising celebrity couple happening, so get ready. Apparently, Selena Gomez and The Weeknd might be a thing. What's that now? TMZ released photos Wednesday of the two musicians getting all cozy and even sharing a kiss. (Bustle has reached out to reps for Gomez and The Weeknd for comment, but did not receive a response at the time of publication.) If you can't manage to wrap your head around the news, then let's ease into it by attempting to answer the question, "How did Selena Gomez and The Weekend meet?"

Believe it or not, but Gomez and the Starboy artist are connected in more ways than one. These connections may or may not be exactly how they first met, but they are definitely possibilities.

First and foremost, they both performed at the 2015 Victoria's Secret Fashion Show. Based on the photos from the event (above and below), they definitely looked like they had a blast. Of course, around this time The Weeknd was dating Bella Hadid and Gomez was linked to Samuel Krost. It's unclear if this is where they first met, but according to Us Weekly, the talents have "known each other for awhile." A source reportedly told Us that Gomez "really likes him and they are just getting to know each other better." They are also reportedly working on new music together.

There's also a chance that Gomez met The Weeknd through some of her friends, including Taylor Swift and Gigi Hadid. Seeing as Gigi's sister, Bella, was dating The Weeknd for sometime, maybe Gomez ran into him every now and again whenever they all got together. After Bella and The Weeknd broke up in November 2016, maybe Gomez and The Weeknd started hanging out, looking to collaborate on some new music, and then things just flourished romantically.

It sure seems like Gomez has been a fan of The Weeknd's for awhile. In September 2015, she called into John Garabedian's Open House Party on the radio and gushed about The Weeknd's music. She said, "I'm obsessed, obsessed with The Weeknd's new album. I think he's doing such cool stuff lately and, obviously, he's been on fire, so I'm a huge Weekend fan."

However they met, they sure look happy in TMZ's photos.