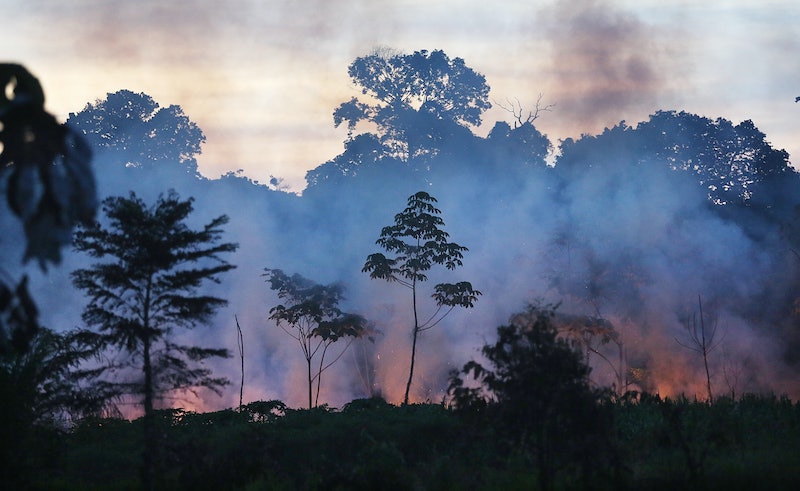 There are currently record-breaking fires happening in the world's biggest tropical rainforest — and there's been some debate about what's causing the blazes. It's safe to say people around the world have been wondering how the Amazon rainforest fires started in the first place, and whether the Amazon's special ecosystem is going to be damaged as a result. As it turns out, experts believe the fires were started by humans — and they could have profound consequences.

The Amazon rainforest covers a large portion of northern Brazil, along with parts of several other South American countries. While there are fires in the Amazon every year, this year there's been a substantial uptick. According to Brazil's National Institute for Space Research (INPE), there have been around 74,000 fires in the Amazon in 2019, compared to 40,136 fires in 2018.

As CNN reported, because of its humid, wet environment, there are few natural wildfires in the Amazon. Instead, as the outlet noted, the overwhelming majority of Amazonian fires are started by humans as a way to clear land for farming and grazing. Alberto Setzer, a senior scientist at INPE, emphasized to CNN that 99% of the rainforest's fires were caused by human action "either on purpose or by accident."

Dr. Meg Symington, Ph.D., the managing director for the Amazon at the World Wildlife Fund (WWF), agrees. "Except in very rare cases, all of these fires are set deliberately by people. To make way for agriculture and cattle pasture, landowners clear cut forests and then ignite fires during the dry season to completely clear the land," she tells Bustle. "But these fires can easily get out of control, and quickly spread past the intended burn site."

So, while fires in the Amazon aren't atypical, the amount of them happening this year has surprised experts. "These fires occur within Brazil's annual 'burning season,' so forest fires of this kind are not new. However, their current scale is unprecedented," Christian Poirier, the program director of Amazon Watch, a nonprofit, tells Bustle. Poirier blames Brazilian President Jair Bolsonaro's attitude toward conservation policies for the significant increase in fires.

For example, as the New York Times reported, Bolsonaro has repeatedly said he wants to allow more businesses to use Amazonian land and dismantle the indigenous and environmental protections that safeguard the rainforest. In fact, in late February, the president's agricultural minister said his administration hopes to legalize the growing of commercial products in indigenous Amazonian communities, Mongabay noted. On Wednesday, as ThinkProgress described, Bolsonaro, with no evidence, accused nongovernmental environmental organizations of starting the fires to "trick" the public into criticizing him.

Dr. Adrian Forsyth, Ph.D., a tropical biologist and co-founder of the nonprofit Amazon Conservation, has similar thoughts. The fires " ... are set by land speculators and agriculturalists to destroy rainforest and replace it with cattle or soybeans. [These fires] are illegal but people are [lighting them] at great scale because Bolsonaro will do nothing to prevent it," he says to Bustle. "The climate change consequences threaten not just Brazilians but everyone's future on the planet."

As CNET described, the Amazonian fires are especially worrisome because the rainforest creates over 20% of the world's oxygen and plays a huge part in controlling the earth's climate. If it's destroyed or it decreases in size, there could be massive environmental and human consequences throughout the world. Moreover, the fires also threaten the forest's wildlife, which accounts for 10% of the world's biodiversity, CNET says.

"The Amazon is [an] invaluable resource for the ecosystems, communities, and biodiversity it sustains," Symington of the WWF tells Bustle. "Fires of this scale compound the threat to forest wildlife – it takes years for wildlife populations to recover from an event like this, if they do at all."

The world is watching as the Amazon's fires continue to burn. If you're looking for ways to help from afar, consider donating to one of these organizations that works to protect the rainforest.

More like this
Ashamed Of Your Screen Time Stats? Here's How To Change That
By Alexis Morillo
6 Organizations Fighting Police Brutality That You Can Support Right Now
By Syeda Khaula Saad and JR Thorpe
23 Super Sweet Things To Write In A Valentine's Day Card
By Karen Belz and Lexi Inks
Here's How Netflix Should Adapt Prince Harry's Memoir Into A Movie
By Ginny Hogan
Get Even More From Bustle — Sign Up For The Newsletter
From hair trends to relationship advice, our daily newsletter has everything you need to sound like a person who’s on TikTok, even if you aren’t.