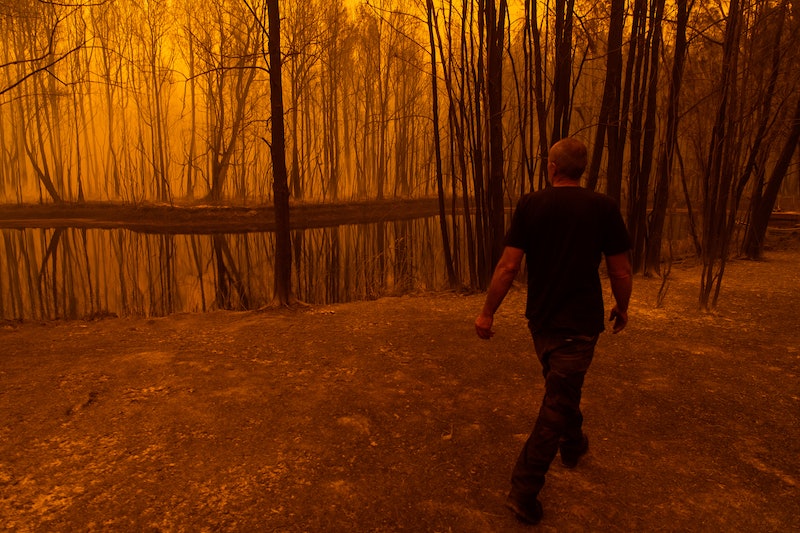 If you've been paying attention to the news or trending posts on social media, you've heard of the devastating wildfires that are plaguing Australia right now. According to reports, the fire has devastated millions of acres, taken at least 25 lives, killed an estimated half a billion animals, and destroyed hundreds of homes. But in the chaos of media outlets and celebrities urging the public to donate, it's difficult to decipher how the Australia wildfires started in the first place.

It's important to understand that bushfires in Australia aren't exactly rare, especially during the summer months. That's due in part to the country's climate. "Apart from human activities, Australia’s hot and dry summers are to blame for the start and the spread of the wildfires," Dr. Diana Bernstein, Ph.D., climate scientist and assistant research professor in the Division of Marine Science at the University of Southern Mississippi, tells Bustle. In fact, wildfires are usually how Australia's eucalyptus trees produce more seeds, allowing them to not only survive in fires but to prosper in them. All that being said, make no mistake — the massive fires blazing in Australia right now are certainly different than anything seen in recent years.

The overwhelming intensity of this year's fires has a lot to do with the record-breaking weather conditions Australia has faced this year. The nation is currently experiencing one of the worst droughts in decades, CNN reported. On top of this, the country also experienced its hottest day on record, according to a tweet from Australia's Bureau of Meteorology. Amid this heat wave, some places even reached 40 degrees Celsius, or about 113 degrees Fahrenheit. This combination of record dryness and heat made the nation especially susceptible to worse fires than recently experienced. And unfortunately, that could become a trend as the planet warms.

Many scientists and weather experts are pointing to climate change's role in this year's extreme fire season. "Climate change makes the fires much more severe," Bernstein says. "A warming climate means much drier and hotter conditions, which greatly increase the intensity and frequency of the fires."

With more than 12 million acres of land already scorched by the fires and almost no signs of them subsiding anytime soon, there have been concerns that Australia's wildfires might only get worse in the upcoming weeks. Australian Prime Minister Scott Morrison told reporters that the fires will most likely continue until the nation can get "some decent rain," according to Time. But Bernstein suggests the crisis could last even longer. "Unfortunately, as humans continue to cause climate change and do little to offset it, fires of this sort will likely become more frequent and deadly," she says.

While the situation as it stands seems grim, there are still plenty of opportunities to help Australia tackle these wildfires and recover once they're contained. Right now, there are several different ways you can support victims of the wildfires including residents, firefighters, and even displaced or at-risk animals.

More like this
Why Experts Say Sleeping With A Fan On Isn’t Totally Risk-Free
By Sophie McEvoy
Kim Kardashian Is Releasing A Line Of Earbuds With Beats
By Alexis Morillo
The 6 Best UV Umbrellas, According To A Dermatologist
By Rachael Green
The 8 Best Indoor Door Mats For Your Home
By Jenny White
Get Even More From Bustle — Sign Up For The Newsletter