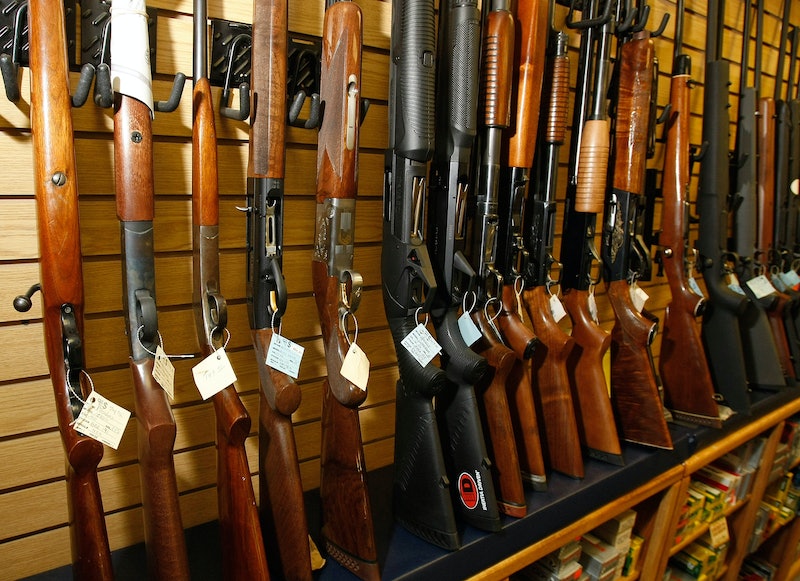 Chris Michel, the owner of Utah gun shop Dixie GunWorx, has had a hard time sleeping the last two nights. On Sunday, his wife shook him awake to tell him there'd been a mass shooting in Las Vegas. When Michel, the gun shop owner, saw the Las Vegas shooter's name, he said he felt like his stomach was "falling out" of his body. The shooter had visited Michel's gun shop three times, and, on his last visit, Michel sold him a shotgun.

In an interview with Bustle, Michel says the shooter passed all of the background checks required of him. What's more, during his conversations with the shooter, Michel said the 64-year-old hadn't raised any "red flags."

But, in the aftermath of the country's most deadly mass shooting to date, Michel says he continues to struggle with the question of whether there was anything more he could have done to prevent Sunday night's massacre.

"That's the question that's kept me up all night," Michel says. "Did I mess up, screw up, do something wrong? How can I not look at all of those angles?"

"I think there is plenty of gun crime that happens where there should be more enforcement and no leniency to people who use guns in that instance. That right should be stripped from someone for the rest of their life.

A question that Michel has a firm answer to, though, is one about gun regulations. "No, I don’t think that any stronger laws would change where we’re at today," he tells Bustle. "There are literally thousands of laws on states and federal levels. All of them were passed in this situation."

What Michel has an issue with is the enforcement of those current gun regulations, which he says "would do way more than redoing the laws."

By this, Michel means he would like to see stricter repercussions for those found to have abused their right to bear arms. Michel tells Bustle there's a customer who has come into his store multiple times who Michel says he knows has wielded his gun as a weapon against his wife in an instance of domestic violence. Michel says he refuses to sell any firearms to this customer based on his own "moral code."

"I think there is plenty of gun crime that happens where there should be more enforcement and no leniency to people who use guns in that instance," Michel says. "That right should be stripped from someone for the rest of their life. They proven they can’t use that right effectively."

In the case of domestic violence, this is, in fact, the case: In June 2016, the Supreme Court passed down a landmark decision on Voisine v. the United States, prohibiting anyone convicted of domestic violence from possessing firearms. (The only other people who may lose their rights to the Second Amendment are those convicted of a felony and those who are mentally ill.)

It's worth noting that Paddock didn't have a criminal record, allowing him to pass background checks with ease. Nevada gun laws, meanwhile, permitted him to purchase some 33 firearms in just 12 months time. Federal law also currently allows citizens to make multiple rifle purchases without reporting them to the Bureau of Alcohol, Tobacco, Firearms and Explosives, as they are required to with handguns.

Still, David Famiglietti, whose Las Vegas gun shop New Frontier Armory sold the shooter a rifle and a shotgun, agreed that the country's current gun laws are sufficient. He tells Bustle there's certainly more to be done to prevent people like the Las Vegas shooter from getting his hands on firearms, but maintains it's not within the firearm industry's power to figure out what.

"We’re not doctors or psychologists," Famiglietti says. "I would love to have been able to [have known] this sick bastard had whatever he had inside him that would let him do such a horrific thing in my town. I would give anything to have that super power."

Both Michel and Famiglietti say their peers in the industry — which they both call a "small" and "close knit" community — have reached out to them after the revelation that their gun shops sold guns to Paddock.

Michel says a gun shop owner in South Carolina who had once sold a firearm to someone who'd used it to commit a local crime reached out to him on social media; he says the owner had been "a shoulder to lean on" and "someone else to say, 'It's not your fault.'" Famiglietti, meanwhile, received a Facebook message from a store owner who sold the Orlando shooter one of the guns he used to kill 49 people at the Pulse nightclub in June 2016.

"We have to have each other’s backs all the time, not just in times like this," Famiglietti says of his fellow gun shop owners. "We’re one of the very few industries and past times that has to constantly be on the defensive and fight for our rights — and the rights of all citizens — nonstop to be able to enjoy one of our freedoms."

Famiglietti and Michel's opponents would say the right to go to a concert and not fear death — not even consider the prospect of being gunned down in cold blood, as many of us now do — is a freedom Americans can no longer enjoy. Preventing these untimely deaths may not be a matter of having a "super power" but of passing sensible legislation expanding background checks and simply making a gun more difficult to come by.

But when faced with these claims, Famiglietti resorted to familiar arguments. "Criminals will always find a way to get what they need," he insists. "We have a people problem in our country, not a gun problem."

Michel, on the other hand, suggests what the country needs most right now is not to consider gun regulations, but to consider forgiveness. For whom? Paddock, Michel insists.

"I believe we ought to forgive him for us for our healing purposes, so we as a people can move on," Michel says. "So we can put an end to the hatred. Hatred is never gonna get us anywhere."