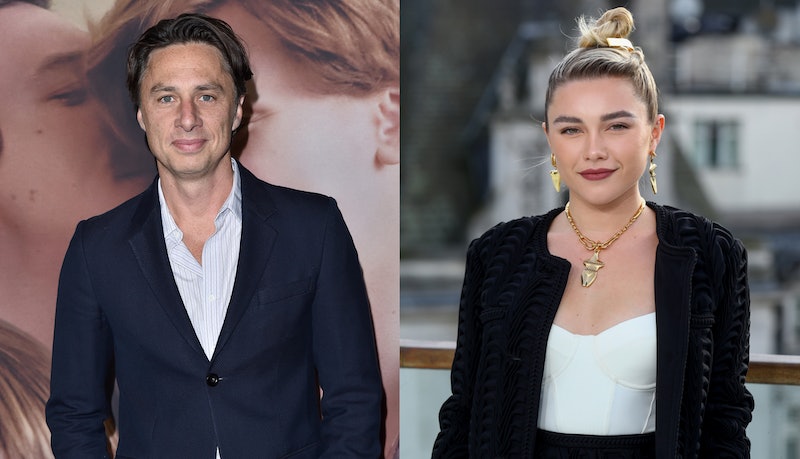 We’re well and truly in the midst of awards season and while there’s been so many awesome films and talent, if there's one actor who really nailed 2019 it’s Florence Pugh. Between leading roles in the amazing Midsommar and Little Women which has earned her an Oscar nomination she’s been all over the big screens. However, her personal life has hit the headlines too. How did Zach Braff and Florence Pugh meet?

In March 2019, Pugh took on the leading role in In The Time It Takes To Get There. The indie short film was directed and written by Braff. While there’s no confirmation as to whether it was on set that the pair met for the first time it seems likely that this is where their romance began. However, Cosmopolitan has pointed out that Braff was liking Pugh’s pictures on Instagram long before that but honestly, aren’t we all? I've reached out to representatives of Braff and Pugh for confirmation on when exactly they first met and will update you as soon as I hear back.

In In The Time It Takes To Get There Pugh plays Lucille, the first social media influencer who is trying to tackle world wide popularity from her decadent 18th century home. Alicia Silverstone plays Pugh’s comedic handler.

The short came to life after Braff and Adobe Students created a poster competition to inspire a film. Braff revealed on his Instagram that the short film only took a week to film and Pugh wrote on her Instagram, “so.. adobe held a competition for college kids to design their own movie poster and the winning poster would then get MADE into a short film. After that it was up to the fantastic @zachbraff to choose one, write a script and ALSO direct the short. The poster that won was created by @_swest and inspired this entire film (pretty fecking cool) In The Time It Takes To Get There.”

After it was hinted that Pugh and Braff were in a relationship in spring 2019 they’ve kept anything going on between them on the DL. It’s never been totally confirmed they’re together but they’ve been pictured out and about together looking very loved up. They’ve never appeared at a red carpet event together. However, with Pugh’s Oscar nomination that may change.