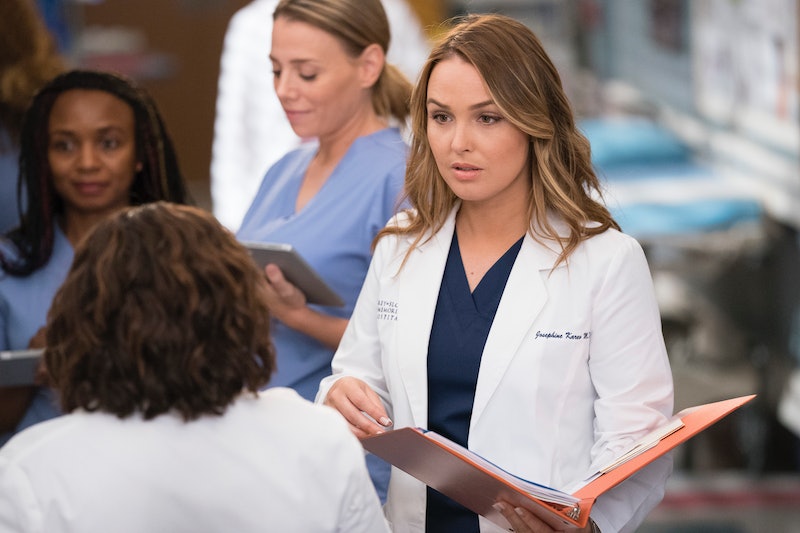 An abundance of characters on Grey's Anatomy means that even the most casual of fans have to remember an abundance backstories and sob stories just to stay at pace with the show. Jo Karev (née Wilson) is basically a vet of the series now, and we know, for the most part, her life up until she came to Grey's — having lived in her car, her abusive marriage, and her subsequent escape from it. But now, we have Atticus Lincoln, disappointingly known as Link. He's the new "Ortho God," which is a nickname he gave himself, but whatever. He's hot, so he can hang around for now. Except there's one remaining question about this guy that throws an interesting wrench into both Link and Jo's respective origin stories — how do Jo and Link know each other on Grey's Anatomy? The show's Twitter fandom is really curious about this new development.

It's funny because Link has been in the hospital for at least three episodes now, even bugging Alex, now interim chief, for money for some prosthetics he wants to make. But somehow, Jo missed him. It wasn't until the end of "Momma Knows Best" that, while walking through the hospital with Alex, she spotted him, and leapt into his arms for a huge hug. It was all platonic enough — they looked like old college buddies or something. But Alex was grimacing, a sign that there might be some tension to come.

But is there, though? Jo is happily married to Alex Karev, who, as she said in the Oct. 11 episode of the show, gives her a "ton of orgasms" (always, in my opinion, a prerequisite in a romantic relationship). These two lovebirds are newlyweds and they're good. Link seems like he has eyes for Meredith Grey and Amelia Shepherd, mostly because he's made advances toward both of them and was shot down each time.

I don't know that he was serious about either women, though — Link could be a throwback to a time on Grey's Anatomy where the relationships were just "everyone is sleeping with everyone else." Grey's Anatomy: The College Years, so to speak. Link and Jo seem like really good old friends who haven't seen each other in a long time, not long-lost lovers. That said, Twitter had a lot of questions during their surprise reunion.

That last Twitter user has a good point — when Link saw Jo, he didn't refer to her as "Jo." He called her "Brooke" instead. For those of you who don't eat, sleep, and breathe Grey's Anatomy and forgot, Brooke is Jo's real first name, the name she had when she was married to now-dead Dr. Paul Stadler, who physically and psychologically abused her until she was forced to run away and leave him. Paul is dead now, having been hit by a car (shame).

If Link is calling Jo by her old name, that means he knows her from her past life — the life she was forced to leave behind. He could have known Jo from medical school, since they are both doctors. They could have done all the fun, scary parts of becoming a doctor together and then split to go out and get residencies in the real world. Maybe he was her "person" back then.

Given his need for control, Paul doesn't seem like the kind of man to allow Jo to have had male friends. What if Link and Paul were friends instead and Link knows Jo, or Brooke, from their days living in Boston? They could have been couple friends, even, if Link had a partner, and Link had no idea about Paul's abuse. Or worse — he did know and did nothing about it. There are so many possibilities here.

However Jo and Link know each other is purely speculative at this point, but considering how happy Jo seemed to see Link, she clearly doesn't associate his presence with unhappy memories. We'll learn more about these two friends as Grey's Anatomy progresses (hopefully), and maybe Alex won't get too jealous this time.