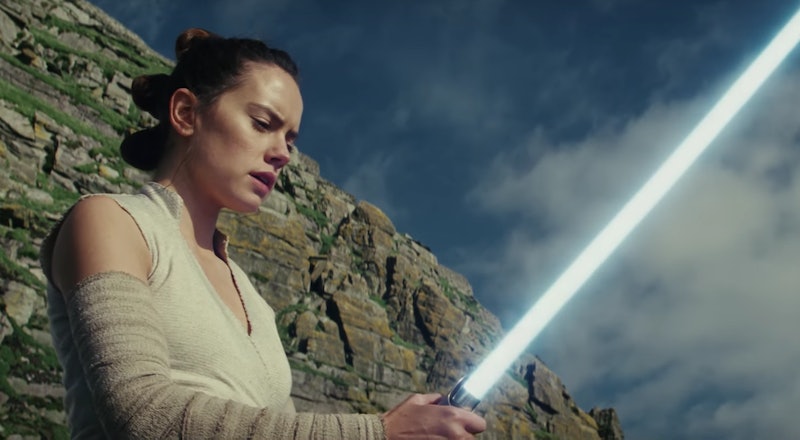 Spoilers ahead for Star Wars: The Last Jedi. Throughout the newest Star Wars film, fans see that Rey (played by Daisy Ridley) and Kylo Ren (Adam Driver) share a telepathic connection, and at one point Rey and Kylo Ren even hold hands. But how exactly is this possible? The simple answer: the Force. In The Last Jedi, we see a number of characters use the Force to do things that weren't known to be possible before, including the ability to do physical things with a holographic version of one's self.

The connection between Rey and Kylo Ren, aka Ben Solo, is undeniably strong. During multiple scenes in the movie they are able to communicate with one another from across the galaxy, but that isn't where their connection ends. Rey is able to see Kylo Ren and his surroundings, as is evident from the scene where she asks him to put on clothing when he's seen not wearing a shirt while communicating with Rey. Kylo Ren does say at one point though that he cannot see Rey's surroundings.

During an especially intense scene, Rey and Kylo Ren are even able to touch each other's hands, and in doing so, they each see a vision related to the other. Rey sees a sign that there could be good deep-down inside Ben still, and Kylo Ren is able to see who Rey's parents are.

However, it's been debated among fans whether or what he saw was actually Rey's birth parents, or if she in fact even has any. Remember, in the Star Wars prequel trilogy, we learned that Anakin Skywalker was a child of the Force, as his mother became pregnant from an immaculate conception of sorts. The Last Jedi writer and director Rian Johnson did tell Bustle recently that this scene was filmed with sincerity and that it wasn't a chess move by Kylo Ren, but acknowledged that he isn't involved with the next movie. So anything is possible at this point.

Later in The Last Jedi, it is Supreme Leader Snoke who takes credit for Rey and Kylo Ren's ability to communicate with each other across the galaxy. Snoke claimed he did it to expose Kylo Ren's vulnerability and to get him to bring Rey to him, he hints that he knows the details of their conversations, and seems to have an almost omniscient like power over Kylo Ren.

However, it's quickly shown that he isn't really all-knowing when Kylo Ren stealthily uses his power of the Dark Side of Force to twist a lightsaber sitting next to Snoke which slices the Supreme Leader in half and kills him. The point being that Snoke might not have been the one who linked Rey and Kylo Ren at all, but could simply listen in on their communications and used that knowledge to manipulate Rey and Kylo Ren.

Others have speculated that the telepathy and ability to see and feel each other could be a hint that Rey and Kylo Ren are related. The only other time we've seen something similar was in The Empire Strikes back when Luke Skywalker communicated with Princess, now General Leia Organa. The two were revealed to be twins, and although there hasn't been any indication that Kylo Ren and Rey are twins, there's a possibility they could be related in another way.

It's worth noting that Klyo Ren and Rey aren't the only characters who show off skills and abilities we haven't yet seen in Star Wars films. In fact, Luke Skywalker does something similar with the Force when he telepathically appears as a hologram on mineral planet of Crait to fight Kylo Ren at the end of the film. Also, Leia shows off her own abilities when she survives an explosion in the cockpit of a ship that sends her out into space without protection.

As you can tell, the Force allowed a number of Rebels and First Order villains to do things we didn't know were possible in the Star Wars universe before, including the ability to virtually hold hands from across the galaxy.