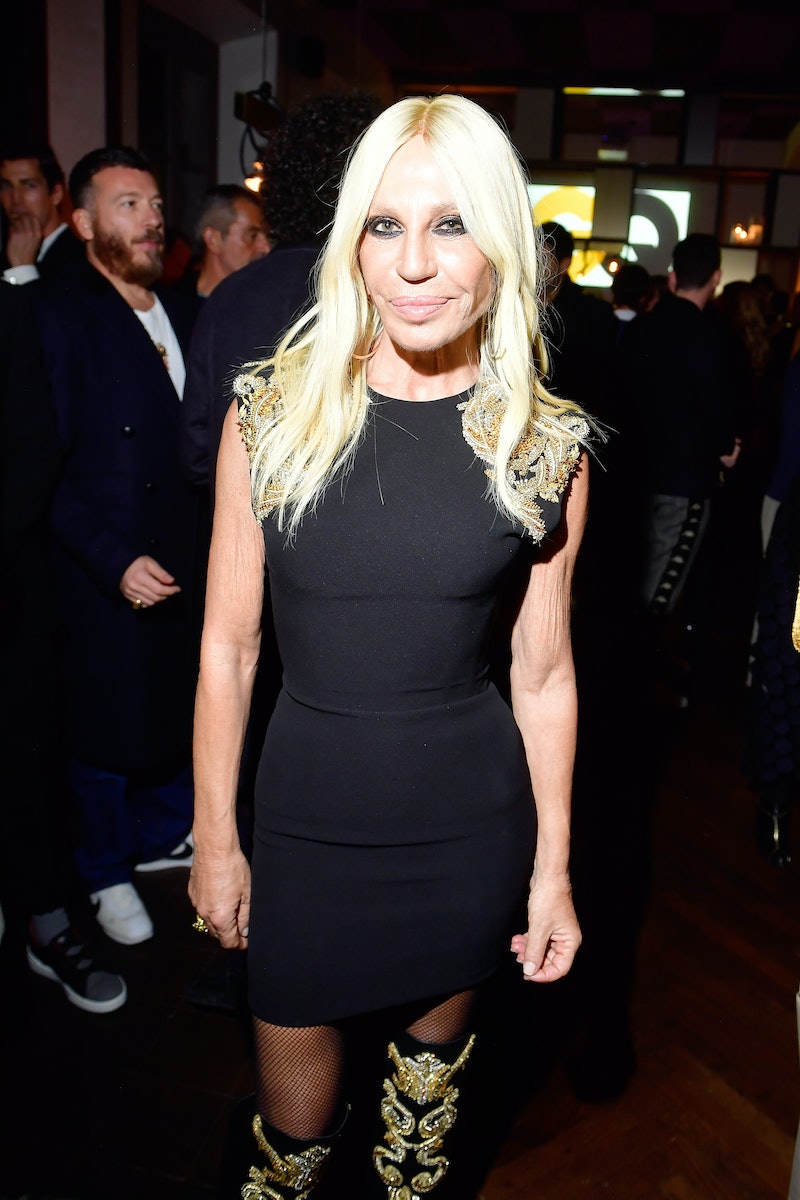 When it comes to luxury fashion brands, the names can sometimes get confusing. Balenciaga. Balmain. Until you hear them from the designers, you never really know how to say the luxe names. Americans, however, seem to agree on the iconic Versace name. However, according to Donatella Versace, how to pronounce "Versace" may be more complicated than people think.

In Vogue's popular "73 Questions" series, Donatella Versace is followed through her Italian home while answering inquiries on everything from her favorite country to visit to her favorite American phrase. Versace, however, appears to have a bone to pick with Americans when it comes to her iconic last name, and the moniker of her late brother's fashion label.

In the video, Versace is asked, "Which Italian word she wished English speakers would stop saying incorrectly?" As it turns out, that word is her name.

In response to the question, Versace explains that most English speakers tend to say the name as Versach-EE, but according to the designer (who is actually the best source for the pronunciation ever), it's actually pronounced Versach-EH. The difference is subtle, but it's definitely recognizable once you hear the talented creator say it herself in the video.

If you've ever said the name Versace the first way, she's basically telling you to please not.

In the video, Versace certainly doesn't mention the mispronunciation in any sort of condescending manner. Instead, she appears to have a bit of a sense of humor about the mishap. The designer has always been a fashion favorite among style fans, and it may just be because of the laid back demeanor viewers see in the her "73 Questions" video.

The pronunciation of Versace, however, wasn't the only thing that the designer revealed in the video. In fact, it may be the most intimate yet low-key look into her life. Vogue asks extensively about her late brother Gianni Versace who is the subject of Ryan Murphy's American Crime Story: The Assassination of Gianni Versace. While the show has not been met with approval from the Versace family, the interview with Vogue gives a glimpse into Donatella Versace's journey since the murder 20 years ago.

According to the video, Versace is designing a collection inspired by her late brother, but she isn't revealing the details. She simply explains that with 20 years past, she feels ready.

Since her brother's death, Versace has been the head of the House of Versace, and she's dressed some of the world's most well known stars. She may just be doing it again soon. Versace is actually co-chair of this year's Met Gala, and in the video she explains that it will, of course, be the best one yet. The question is who she will be dressing (if anyone). While she was not asked that question, she has a history of dressing people.

Just last year, she dressed Kylie Jenner in a stunning, nude mesh gown with gorgeous floral accents that got Jenner onto many best dressed lists. Will she be dressing a new Kar-Jenner or will it be someone new? Though, as co-chair, she may be a bit busy.

Vogue "73 Questions" with Versace reveals quite a bit about the designer who, in the video, explains that there's a misperception that she can be cold. That is wiped away after seeing her wander through her late brother's Milan apartment, smiling, and speaking with the magazine.

From her favorite flower, how she likes to wear perfume, and what television show she's currently watching, fans get a glimpse into her every day life. While English speakers may be mispronouncing her name, they certainly understand that Versace is a living legend who also happens to be down to earth.