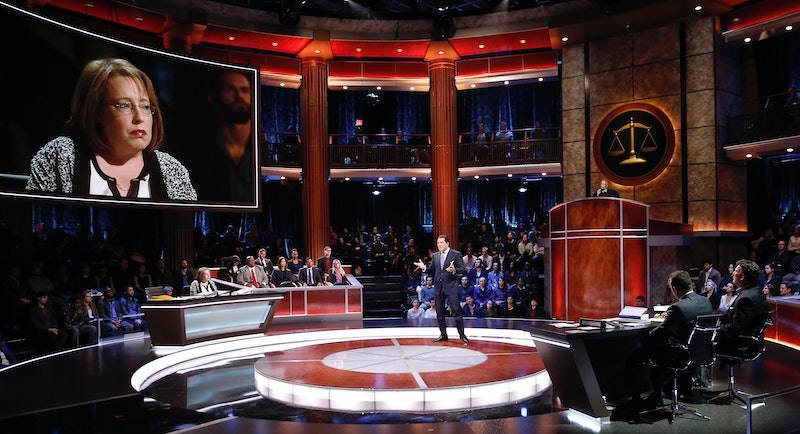 "Welcome to the new face of American justice," the promo proclaims… and, perhaps unsurprisingly, the new face of American justice is apparently a reality television program where viewers vote on the verdict from the comfort of their living rooms. How do you vote for You The Jury? It's a crucial question if you're planning on tuning into the new FOX reality series debuting this Friday. Fortunately, the network has made it remarkable easy for everyone: all you need is a smart phone and at least one functioning finger!

If you're not yet in the loop about exactly what You The Jury is or why it exists — well, I can answer one of those questions for you. Every week, You The Jury will bring one case to trial (always civil cases, never criminal) that, according to Deadline, "address hot-button issues such as online trolling, the limits of free speech, and the constitutional clash of gay rights with religious freedom." The cases will be argued by various celebrity lawyers including the likes of Jose Baez (who defended Casey Anthony), they will be presided over by Superior Court of California judge LaDoris Cordell, and the whole thing will be hosted by Jeanine Pirro of Fox News.

However, there's one crucial difference between these cases and typical civil court trials — other than the glitzy set and the live studio audience, of course; instead of a 12-person jury of peers, each verdict will be decided on by the show's (presumably) millions of viewers. Here's how it will work: after the closing arguments (delivered directly from the plaintiff and the defendant themselves rather than their lawyers, according to Deadline), audience members will have a five-minute window during which to cast their vote. Voting will be done via smart phone, either by texting a number provided by the show, or by using the FOX Now App. A verdict will then be handed down based on how the majority of respondents voted.

"But wait!" you may be wondering right about now. "What if I live on the West Coast and get all my shows on a delay? How will my vote ever matter?" Well, that's where it gets interesting. Although the verdict will technically be decided during the show's live airing for the East and Central time zones, if the cumulative responses from viewers in the Mountain and Pacific time zones do end up swaying the vote, then the verdict will be overturned.

"But wait!" you may be wondering right about now (again). "How is any of this legal??" The answer to that is… actually super unclear, but Deadline reports that "the verdicts are not expected to be legally binding." That's in conflict with the FOX site, which says, "The vote on the verdict is 100 percent live and binding." Bustle reached out for clarification, and was told that it is binding and the logistics of that will be explained during the premiere.

Regardless of its reason for existing, You The Jury is almost upon us. So if you want to feel like you're making a difference, then tune in with your phone handy and your fingers flexed for quick button-pushing. (Is there a more apt metaphor for the state of our country right now than giving the masses power that may prove to be nothing but an easily-overturned illusion?)