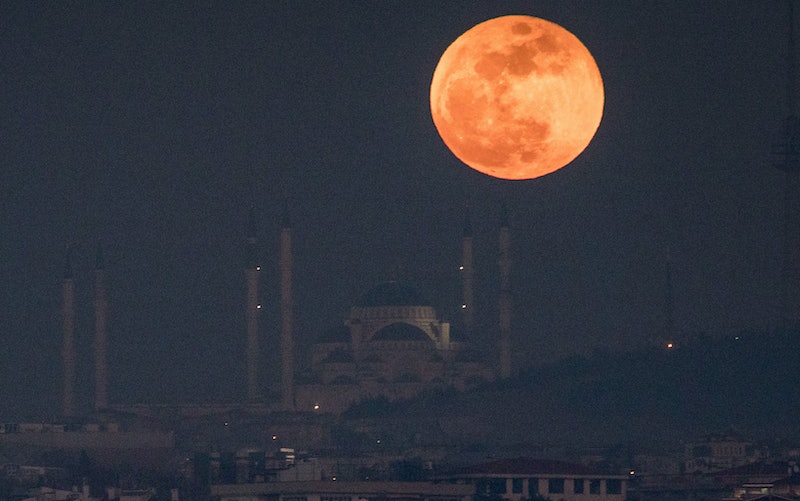 A blood moon is on its way, people. On Friday, there is going to be a total lunar eclipse in the UK at precisely 9.21 p.m. While it's going to be a pretty amazing sight, did you know that apparently, the phenomena can impact people's behaviour? I know. But how does a blood moon affect mood exactly and how hardcore is it going to be?

OK, firstly, what even is a blood moon? According to Space.com, a blood moon occurs when the moon is in total lunar eclipse (insert Jaffa Cake joke here). It happens roughly twice a year but this one is particularly important as it's the longest one this century, lasting a full 13 minutes, as reported by The Express. The reason that the moon eerily changes colour is that when it's in total eclipse, it is in the Earth's shadow. A slight bit of light from the daily sunsets and sunrises we have here on Earth means that the bit of light that falls on the surface of the moon makes it change colour to a red, brownish, almost blood shade. Hence its nickname.

Although there is no scientific evidence to prove so, it's believed by many that the gravitational forces in action at this exact moment can have a pretty big impact on people's behaviours. Science communicator Dr. Karl Kruszelnicki wrote in an article for ABC Science: "One survey in the USA found that about 40 percent of the general population, and 80 percent of mental health professionals, believe that the phase of the moon affects human behaviour."

So what's the deal?

Astrologer Jamie Partridge described the blood moon as an "emotionally challenging eclipse" influenced by the planet Mars. In a post for website Astrology King, he explained:

"Mars anger and frustration could easily turn to reckless actions because of a harsh aspect to Uranus. A more gentle influence from Saturn will make it a little easier to calm down, and some fixed stars give patience and decisiveness in a crisis. However, these same stars can also cause aggression and emotional problems."

Partridge went on stress that the best way to deal with these intense emotions is to remain calm. He went on to stress that we should actually keep this advice in mind for the following two weeks after Friday's blood moon as the "solar eclipse is still active."

In addition to directly affecting our behaviour, it's claimed that the blood moon may also affect our sleep too, which could in turn impact our moods. Sleep has long been connected to the moon cycle, however, in 2013, there was a pretty comprehensive study conducted by Christopher Cajochen, published by the National Center for Biotechnology Information, that showed for the first time that that the moon really can impact sleep.

According to the Cajochen's research, his participants' restless nights seemed to be at their absolute worst around the full moon. Say what?! Yep, even melatonin, the hormone that tells you it's time to go to sleep, drops hell low around this time of the lunar cycle.

Sleep disruption has been proven to affect ours moods. Sarah Watson, licensed professional counsellor and sex therapist, previously told Bustle that: "When we don't get enough sleep we tend to be short tempered, have increased anxiety or mood swings and this can even impact your connection with your partner." Oh damn you, you majestic blood moon.

Well, with that in mind, perhaps it's best to avoid any people that rile you up over the next couple of weeks. Just in case.