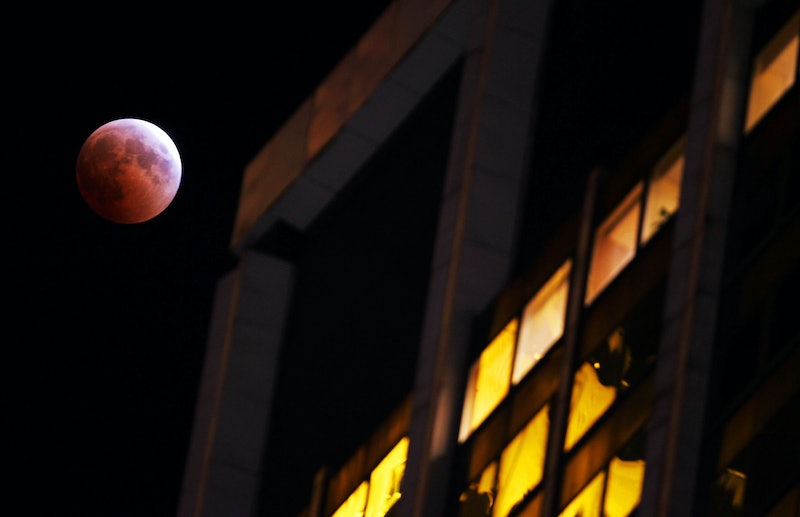 If you can take a three-day weekend this week, do it. The emotionally charged energy of the July 27 blood moon could affect your job — and not in a good way. If you shoot off at the mouth without thinking things through, you could find yourself with a lot of extra free time on your hands. By no means should you avoid speaking your mind if the situation warrants it, but it's important to remember that how you say something is just as important as the message you're trying to convey.

Basically, the blood moon and accompanying total lunar eclipse are akin to a pot that's been simmering for a long time suddenly boiling over. This means that you're more likely than usual to have an emotional outburst that could come back to bite you later. Because the blood moon and lunar eclipse happen on a Friday, if there were ever a time to take a mental health day or spend a three-day weekend under the covers, this is it.

It's going to take a lot more self control than usual to keep your cool at work. Just remember some breathing exercises, and try to keep in mind that this, too, shall pass.

Because the blood moon is also making your co-workers feel dark and twisty, they're also going through similar feelings and thought processes — so, if any disagreements should happen between you and a co-worker, remember that before you get angry. "The lunar eclipse July 2018 astrology is mainly influenced by Mars, making this an emotionally challenging eclipse. Mars anger and frustration could easily turn to reckless actions because of a harsh aspect to Uranus," Astrologer Jamie Partridge explained on Astrology King. "Remaining calm in a crisis is the key to dealing with this overly emotional lunar eclipse."

The added debacle of Mercury retrograde means that communication and technological errors could occur as well, meaning disagreements are more likely to happen.

Put on your headphones, turn up the My Favorite Murder podcast to appease both your sense of humor and the blood moon's dark and twisty vibes, and just keeping to yourself while working this week. You'll look super engaged and there's zero chance of you making a mistake that accidentally exposes company secrets, like the secret baked bean recipe that's been under wraps for decades.

Of course if you have a super adult job like performing surgery, you'll have to figure something else out. Hopefully people won't schedule medical procedures during the blood moon and lunar eclipse. Because, why take that chance? According to Dr. Joseph Mercola's blog, violence and aggression increase during full moons, which leads to more visits to the ER.

Obviously, someone has to pick these people up (EMTs and police) and take them to the ER to be treated for any injuries — so, if you're a police officer, EMT, firefighter, or doctor, you might want to practice some meditations before your shift because a full blood moon is like a regular full moon hopped up on eleventy-million cups of coffee.

So, how can you get through the July 27 blood moon and still have a job on Monday? Repeat the mantra "I am calm, I am light" under your breath, lay off the sugar, get a good night's sleep the day before the blood moon, and things will be less likely to go awry. Godspeed my friendlies, and may the odds be ever in your favor.