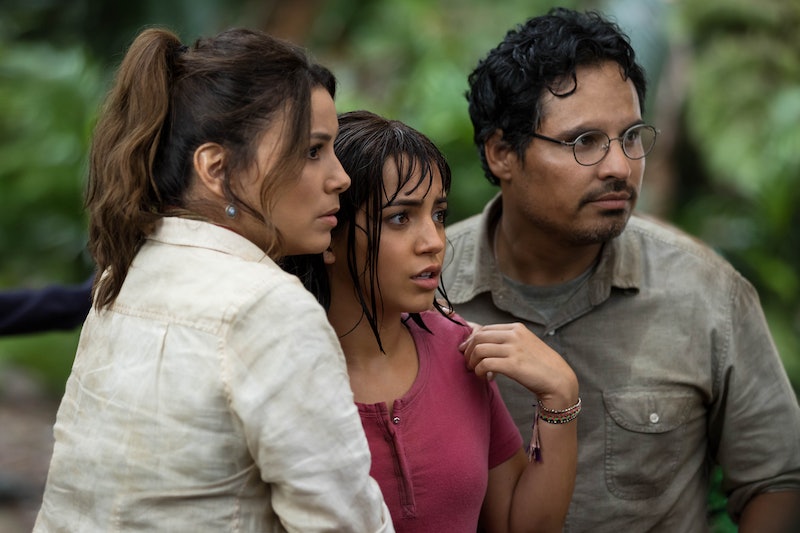 The animated series Dora the Explorer started airing on Nick in 2000 and ran through 2014, making it a cultural touchpoint for a whole generation of kids. On Aug. 9, a live-action movie based on the show called Dora and the Lost City of Gold will hit theaters and bring the Latinx treasure hunter, Dora, to life. But while Dora and the Lost City of Gold connects to the show with its main characters and general plot, the live-action movie makes a lot of changes to the animated original's storyline.

First of all, Dora the Explorer follows a seven-year-old Dora Márquez, who is never shown to age during the series' run. A spinoff series, Dora and Friends: Into the City! aired on Nickelodeon from 2014-2017, and on that series Dora is 10, going to school and meeting new friends. Dora and the Lost City of Gold is like a combination of the two series, as it follows a teenage Dora (Isabela Moner) who brings her new friends from high school along on a rescue mission to save her archaeologist parents (Eva Longoria and Michael Peña) from the jungle and solve a mystery behind the famous city of gold, or El Dorado.

The original Dora was made for children, of course, so it has a pretty specific formula. Most episodes, Dora would go on an adventure along with her monkey friend, Boots. To get where she was going, Dora relied on a map and talking purple backpack — both of which had their own singalong songs to go with them. In the new film, Boots will appear as a CGI monkey, and while the backpack is not, in fact, anthropomorphic, some of the animals in the film will talk, like they do in the TV show. For instance, Benicio Del Toro voices Swiper, Haley Tju voices Isa the Iguana, and Danny Trejo voices Boots.

In the third season of Dora the Explorer, Dora's cousin Diego Márquez joined the series as a regular adventure buddy for Dora — and he even got his own spinoff show, Go, Diego, Go!, on Nickelodeon in 2005. In the live-action Dora film, Diego (Jeff Wahlberg) joins Dora on her adventure to rescue her parents from the jungle, along with a couple other high schoolers who inadvertently find themselves on a dangerous journey.

A lot about the Dora film has been kept under wraps besides its general storyline and connection to the Nickelodeon show. It seems like there are a lot of surprises in store for fans of the original. Wahlberg, who plays Diego, hinted that there's dancing involved while talking with Interview. "We shot in Australia — they took me right to dance practice. Oh, sh*t. I shouldn’t say that. I don’t want to give away too much" Wahlberg said.

The Dora franchise is also famously bilingual. And based on the Spanish trailer for Dora & the Lost City of Gold, it seems that the film will include some Spanish speaking but will mostly be in English. And there isn't an actual Dora the Explorer series episode about the lost city of gold (a.k.a. El Dorado), so the new film will have a whole new adventure that fans of the Nickelodeon cartoon can discover for the first time.