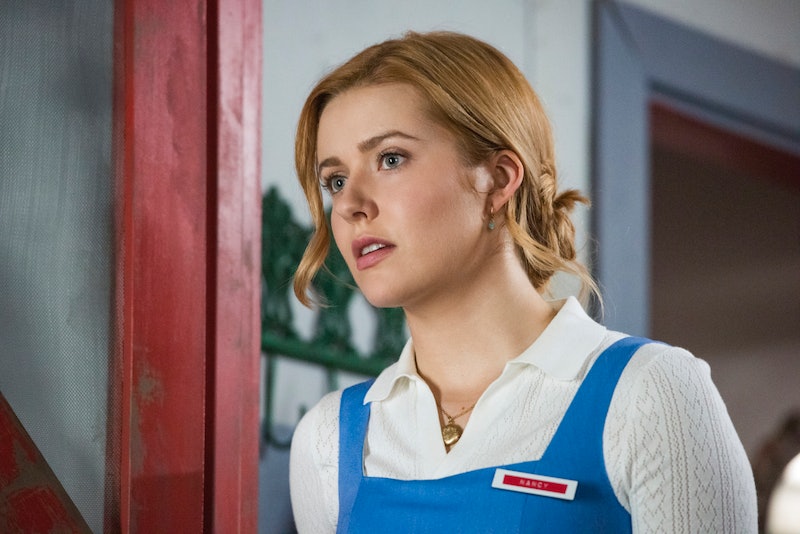 Although Carolyn Keene has always been the pseudonym attached to the book series, the plucky young gumshoe was actually the creation of The Hardy Boys writer Edward Stratemeyer, per the New York Times. The books themselves were written up by Mildred Wirt Benson and later Stratemeyer's daughter, Harriet Stratemeyer Adams. But since the first three books were published in 1930, Nancy Drew herself has been through some necessary edits along the way.

In 1959, Stratemeyer Adams's publisher asked her to clean up the original Nancy Drew Mysteries, per the New York Post, which now had the characters wearing outdated clothes — not to mention the racist depictions of minorities. In The Secret of the Old Clock, according to the L.A. Times, there's a black character named Jeff Tucker, whom Nancy and the police interrogate. In the book, he is a drunk who speaks in AAVE; in the updated version, however, Jeff is simply a white character.

The Many Lives of Nancy Drew

It's unfortunate that Stratemeyer Adams chose to whitewash the books; fortunately, the franchise has continued to evolve since then. The Nancy Drew Mysteries begat The Nancy Drew Files — a series which began in 1986 and saw Nancy wearing high-waisted jeans and sporting big, crunchy hair straight out of The Babysitters Club. 2004-2012 saw the Nancy Drew: Girl Detective era, which was written in the first person. More recently, there's also been the Nancy Drew Diaries.

However, the most progressive adaptation yet has been the Nancy Drew graphic novels, which were not under a pseudonym but instead the author Kelly Thompson. The series began publishing in 2018 and reimagined George as a lesbian with a black girlfriend, per the Guardian, while Bess herself is a black woman. It's certainly a far cry from the chaste, white-washed Nancy of the 1950s. Indeed, the reason the character has had such staying power is her ability to evolve when the times demand it.

The original books were set in a vague, midwestern town called River Heights, according to the New York Times. However, The CW show has Nancy Drew living in Horseshoe Bay on the coast of Maine, which is an effective, blustery backdrop for some good, old-fashioned sleuthing.

Although her clothes and car have changed over the years, the through-line between all of the Nancy Drew adaptations has been the protagonist herself. In Book #1, The Secret of the Old Clock, she's introduced as an 18-year-old zooming down the road in her new, blue convertible (in the older versions, she's 16 and drives a roadster). In The Clue in the Diary — seventh in the series — Nancy is described as "pretty in a distinctive way. Her eyes were blue, her hair titian blond. She expressed her opinions firmly, but did not force them on others. Nancy's abilities of leadership were welcome and depended upon in any group."

For the most part, not much has changed for Nancy. She's just graduated from high school in The CW series and lives with her father, Carson Drew, who is a lawyer and a widower. One notable difference, however, is that while her mother died when she was little in the books, Mrs. Drew's death happens soon before the show picks up, causing the sleuth to stop solving mysteries altogether.

Bess (Maddison Jaizani) and George (Leah Lewis) are carryovers from the novels, but there have been several changes from their book depictions. The two girls were cousins, for one, and their appearances were quite different. In The Secret of Shadow Ranch, for instance, Bess was described as a "pretty, slightly plump blonde" who was seemingly always eating, while George was "an attractive tomboyish girl with short dark hair."

Not only are the girls not cousins in the TV show, but they hate each other. Bess is a rich girl from out of town, while George is Nancy's grumpy manager at The Claw. And while there's bound to be less fatphobia directed at Bess than in the books, it is disappointing that The CW chose to slim down Bess's character instead of hiring a plus size actor.

In the books, Nancy's loyal boyfriend is a bland college student named Ned Nickerson, who lives in nearby Mapleton. He's first introduced in The Clue in the Diary, when he gives Nancy, Bess, and George help with her car, which has just gotten into an accident. "[Ned] was about nineteen, Nancy decided, surveying him critically," the book describes. "His hair was dark and slightly curly, his eyes whimsical and friendly. He wore a college fraternity pin." In the TV show, however, he goes by Nick, is originally from Florida, and has a dark past (because who doesn't love a bad boy?).

While Nancy Drew has had a staggeringly long life in print, it's proved difficult to adapt her to the screen. Hopefully these character updates will be enough to give her staying power this time on The CW.

More like this
'The Summer I Turned Pretty' Book Ending Is An Emotional Rollercoaster
By K.W. Colyard
At 14, Jenny Han Wrote Rom-Coms About Her Friends & Fan Mail To Leo DiCaprio
By Alyssa Lapid
10 Must-Read New Books Out This Week
By K.W. Colyard
5 Gripping Books To Read From Women’s Prize For Fiction Winner Ruth Ozeki
By El Hunt
Get Even More From Bustle — Sign Up For The Newsletter