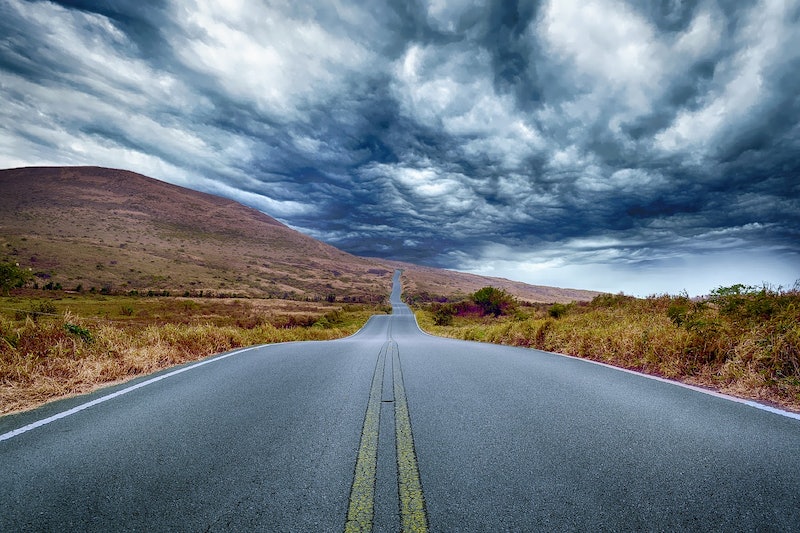 Neptune begins its planetary backspin June 16. If you've got a trip planned between then and Nov. 22, things could get a bit wacky, but not in the same way travel is difficult during Mercury Retrograde. Just how does Neptune Retrograde affect travel? Because Neptune Retrograde in Pisces is associated with heightened emotions and increased sensitivity, your travel plans could be disrupted by internal struggles versus technical difficulties.

The astrology website AstroMark noted that when Neptune turns retrograde you may feel fatigued, which means you need to pay extra attention while traveling. "Pay attention around the 16th when spacey Neptune is turning retrograde. It could be that you are just tired, but driving while tired is not so good."

In Los Angeles, where I live, spacey and unaware drivers are the norm on everyone's best day. Now add in a planetary backspin that promote fatigue and it could be a recipe for disaster. Not to self: Don't drive on June 16.

Neptune is a big, slow-moving planet that takes more than 60,000 days to circle the Sun, and it can spend up to 14 years in a single zodiac sign. Neptune also rules over logic and balance, so in addition to being tired everyone and their mother might also seem unreasonable.

"When in retrograde, logic falls to the wayside," astrology site The Pagan Path explained. "People gain an increased interest in intuition or esoteric matters. Dreams and psychic abilities find new followers, as people beginning to analyze their inner natures. New outlets of communications come to the surface as artistic abilities get expressed."

While everyone is busy getting to know their inner self, outward focus could suffer, so here's some things to be aware of if you're traveling during Neptune Retrograde.

Astrology website Twixt, Earth & Sky reported that you could develop some unusual fears during Neptune Retrograde. "There may be an obsessive fear of water," the site noted, perhaps because it coincides with the start of hurricane season.

Because Neptune Retrograde is known for stripping away delusions, you might view things you previously thought were safe as sinister or dangerous, especially if you are a Pisces.

"Neptune retrograde can internalize your fears and anxieties by stripping away the illusions, dreams and false realities that have clouded your vision," astrology website Start Sign Style noted. "The destruction of your fantasy world will reveal those harsh realities you sought to avoid at some stage in the past."

While that scuba diving trip may have sounded like a good idea a few months ago, during Neptune Retrograde you could end up feeling trapped or unsafe.

You've probably heard those horror stories about everyone getting Norovirus on a cruise ship. Because Neptune is the ruler of communicable disease this might be more likely to happen while the planet is retrograde.

"Neptune is also the ruler over bacteria, viruses and the immune system," The Pagan Path reported. "So when it goes retrograde, allergies may kick up or worsen. In addition, children who are given vaccinations during this time, can develop stronger reactions to the drugs. Many people will suffer with an over-sensitive immune system and can develop more serious diseases."

Take extra health precautions while traveling during Neptune Retrograde. Avoid things like seafood buffets, undercooked food, and unwashed fruits and veggies; make sure you have anti-bacterial wipes at the ready; and don't touch things like stairway handrails, or elevator buttons with your bare hands. Or, perhaps just don't travel somewhere that will have you in close quarters with thousands of other people.

As I mentioned earlier, Neptune Retrograde's spacey tendencies means it's ultra important to be an alert traveler during this time.

"Because Neptune rules the pineal gland, there may often be disturbances in our sleeping habits or sleep/wake cycles," medical astrology site Greek Medicine noted. "Accidents can also happen under Neptune transits, and will often involve something freakish, improbable, or bizarre."

You can only control yourself, so you also might want to consider that this brain fog could also affect the people flying your plane, driving your taxi, or operating your train.

Don't Overindulge While On Vacay

If you have any sort of addiction issues, or predispositions toward obsessions, it's important to be careful during Neptune Retrograde.

"[Neptune] is linked to suffering and sacrifice, religious feelings, and compassion," the website noted. "It is our psychic or boundary-less experiences, drug taking, illusion, delusion, deception, and scandal and glamour. It is fantasies of the collective and longing."

Additionally, Astrology King warned that while you might feel the need to escape — but Neptune Retrograde is not the time to do it.

"The release of pain relieving hormones in your brain is addictive so you could easily resort to escapism more often and for less critical reasons over time," Astrology King noted. "You may use illness to gain sympathy or to avoid the harsh realities of life. Perhaps you are more subject to confusion and deception than most, or have a tendency to become involved in intrigues and scandals."

So, while have a torrid affair with a foreign diplomat while backpacking through Europe might seem like a good idea in the moment it's most likely to backfire and come back to bite you.

When Not To Travel During Neptune Retrograde

Neptune is retrograde for five months a year so it's unrealistic to halt all travel activities. However, being aware of some of the human foibles that could cause your plans to go sideways is a good idea, and could save your sanity.

But, Mercury is retrograde Aug. 24 — Sept. 19 while Neptune is still retrograde. Personally, I'd avoid major travel during this time since you'll be hit with a double whammy of potential travel problems like tired people operating vehicles with potential mechanical malfunctions.

And, with Neptune overwhelming your emotions, there will most likely be tears as you spend four hours sitting on the tarmac wishing you'd stayed home.

More like this
Craving The Beach? Here's Your Guide To A Solo Vacation In Turks & Caicos
By Alexis Morillo
8 Completely Unserious Tips To Make Your Cuffing Season A Success
By Ginny Hogan
The Historical Meaning Behind Why Autumn Is Called ‘Fall’
By Chelsey Grasso
This Tarot Card Means It's Time To Reach Your Magical Potential
By Brittany Beringer
Get Even More From Bustle — Sign Up For The Newsletter