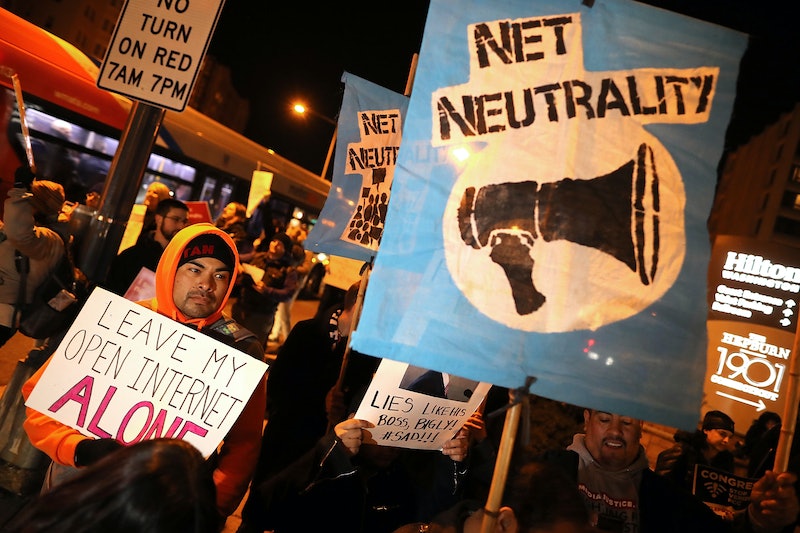 Considering how soon the internet could change as we know it, you might be wondering how net neutrality affects you on a daily basis. This set of rules protects everyday internet users, like you and me, from the whims of massive corporations looking to make an extra buck. Net neutrality mandates companies to treat all internet data as equal. They can't speed up, slow down, or hide any kind of internet content from users. In a way, it works like a virtual democracy.

Net neutrality was federally implemented in 2015 under Barack Obama's administration but on Dec. 14, under Donald Trump's presidency, the Federal Communications Commission (FCC) will decide if it will go forward with following net neutrality protections or reversing them, which means the very nature of the internet in the United States is in danger. Trump's FCC chairman, Ajit Pai, who has spoken against federally "micromanaging" the internet, has been the main voice behind calling for a reversal of net neutrality.

If net neutrality is repealed, you can expect inequality to soar online. Major internet service providers (ISPs) can slow consumers' internet speed, charge fees for opening certain websites, and delay their access to all kinds of virtual content created by smaller businesses and nonprofit organizations. These smaller companies and nonprofit groups may not be financially capable of fighting bigger ISPs like AT&T, Time Warner, Verizon, and Comcast. So, their very voices could come under attack.

Think of net neutrality in terms of the simplest ways you use the internet on a daily basis. From the YouTube and Vimeo videos you watch, the songs you listen to, the articles you read online, to the time you spend on platforms like Twitter, Instagram, WhatsApp, or Snapchat — all of this could potentially come under attack if the rules for net neutrality are flipped. Nixing net neutrality rules could even change the way racial minorities do community organizing.

Protections within net neutrality allow users — for the most part — to communicate freely, create content without inhibition, collaborate with others without limitations, and learn things without restriction. Right now, under these protections, your internet operates like an open network where you can pretty much find any information or entertainment you seek. But without net neutrality, your internet will work and look like a closed network where access to different websites — and naturally, ideas, art, movements, and more — will depend on the offerings made by your internet service provider.

Perhaps the best way to understand the implications of a world without net neutrality is by looking at countries where this is already happening. California Rep. Ro Khanna tweeted an image in October that showed Portugal's internet landscape with no net neutrality. In Portugal's virtual world, internet providers can offer packages of different platforms for users based on their needs.

If net neutrality is repealed in the United States, people may have to subscribe to internet packages based on their needs. So if you use a lot of social media, you would buy a package with more social media access. If you like to keep in touch with friends and family, you would subscribe to a messaging package. Video, email, music, and so on are similarly divided. For someone who uses all of these services on a daily and equal basis — like activists, journalists, teachers, and more — an internet without net neutrality would put a halt to their critical projects and professional networks.

Ultimately, some fear that creativity will suffer greatly in a world without net neutrality. Slate writer April Glaser noted that in a free internet world, creative people can truly shine because of free and open access to different websites and niche communities. Without such reach, observers fear that voices will be stifled and the world, like Glaser said, will look too "homogenized."

At this moment, it looks likely that the FCC will strip these net neutrality rules. But before that decision becomes official, there are certain things proponents of these protections can do to make themselves heard. If you feel strongly about net neutrality, here's how you can fight against the FCC's move.

How Twitter Is Protesting To Keep The Internet Open To All

More like this
This Is When Netflix Is Going To Start Charging You For Sharing Passwords
By Darshita Goyal
These Are The Fastest Electric Kettles You Can Buy
By Margeaux Baulch Klein
24 Funny Valentine’s Day Captions To Use No Matter Your Relationship Status
By Jessica Booth
11 Super Bowl Instagram Captions To Use On Game Day — Even If You Don’t Like Sports
By Alexis Morillo
Get Even More From Bustle — Sign Up For The Newsletter
From hair trends to relationship advice, our daily newsletter has everything you need to sound like a person who’s on TikTok, even if you aren’t.