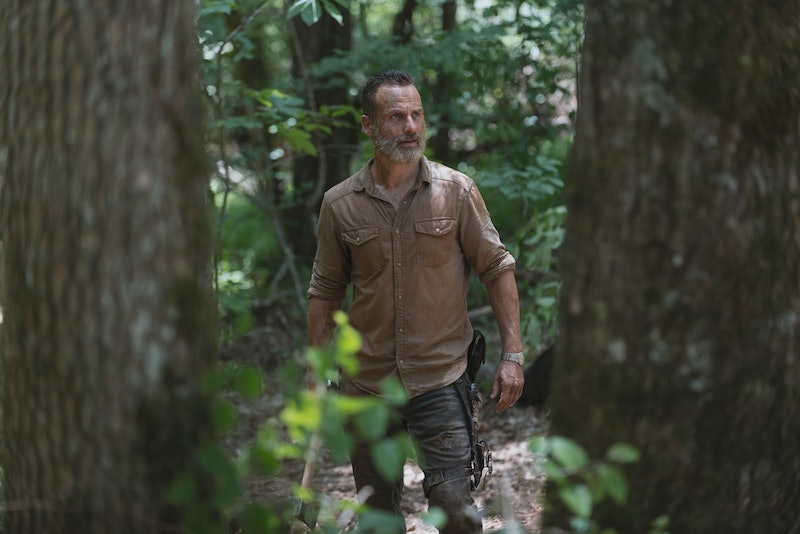 Sunday's episode of The Walking Dead was Rick Grimes' penultimate outing on the AMC series. In the final moments of the episode, while Rick was doing his best to #SaveTheBridge and lead off not one but two herds of walkers, his horse spooked and he fell onto a piece of steel reinforcement sticking out of concrete. Rick was impaled on his side, and passed out. Is, umm, is this it? Is this really how Rick dies on The Walking Dead? It's not over 'til it's over, but things do not look good. It could very well be the beginning of the end.

There's a particular kind of trust issue that Walking Dead fans have cultivated and tended to as if it were a stubborn cactus over the seasons. Who can forget the great "Glenn was under the dumpster the whole time" debacle of 2015, or how Negan's first big kill was drawn out slower than a zombified sloth? The Walking Dead has, in the past, strung fans along if not outright trolled them with red herrings and misdirections. So please, don't take this seemingly lethal injury as anything other than that — seeming.

There's a high chance that Rick lives, and that next Sunday's episode is Rick's last because he leaves Alexandria (preferably with Michonne and Judith) forever — or goes back into a coma or something.

In the promo for next week's episode, below, Rick appears to be taking at least a few steps around after the injury. He seems to even make it all the way back to Alexandria, unless it's an elaborate dream. There are a lot of parallels to the pilot, too, as well as actual scenes from the series premiere that started it all, including Rick and that white horse.

"It's not over," Michonne tells him in the clip for the November 4 episode. "We don't die." Is that a jinx, or a promise? Is she just talking about reanimated corpses? During their meetings this week,Negan had tried to suss out whether or not Michonne was terrified of ending up alone in the new world when she went to try to end his hunger strike, and it would kind of be a shame if he was foreshadowing Rick's death, and putting his theory about Michonne to the test so soon. Let's not even begin to think what Rick's death will mean for Negan, if he ever makes it out of that jail cell.

At least Rick and Daryl, the best bros of all time, got to have a good talk in his penultimate episode about the future. After helping each other out of a zombie pit for potentially the last time, they decide to split up.

As Rick goes off to save his bridge, Daryl calls back to him. "Hey," he grunts to Rick — doing an impression of Bradley Cooper in A Star Is Born unbeknownst to him — "Be safe." "You too," Rick replied. What if this the last time they'll ever get to have "last look at each other?" Don't dwell on that, not just yet. There's still one more episode for Rick, and anything can happen.

"My guess is that [fans are] going to think that his character has come to a complete full circle," Norman Reedus said in an interview with Deadline about Rick's departure from the series earlier this month. Let's hope so.

Whatever you do, don't blame the horse. That's just mean. Can you imagine being a horse in the zombie apocalypse? How scared must that horse be, like, all the time? Rick Grimes' time on The Walking Dead is coming to a close, but fans still don't know exactly what that means. If this is how he dies, it's already too late, but knowing this show, there are probably a few more twists and turns just growing around the corner, waiting to be revealed. That doesn't mean it's not already the end of an era, though.