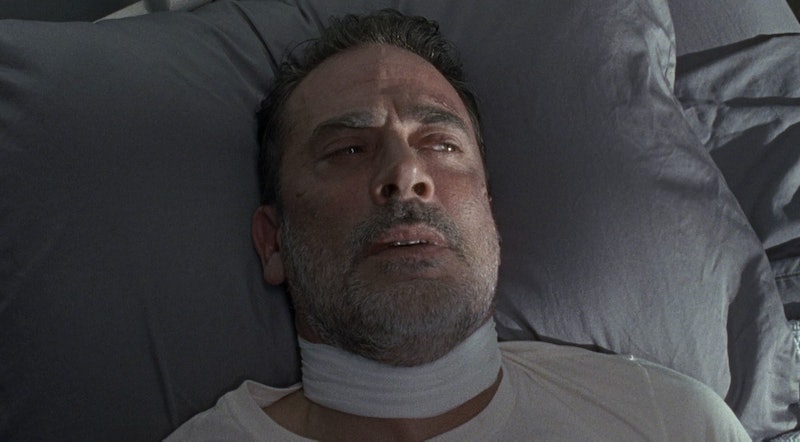 After two seasons as the main antagonist of The Walking Dead, you may have noticed that Negan isn't so prominent in the Season 9 previews. Sure, he's still giving Rick some long-winded guff, but exactly where is Negan in The Walking Dead Season 9? Besides his voiceovers, he has only been shown briefly in the previews and even then, it's in the shadows. But as Rick made the unpopular decision in the Season 8 finale to let Negan live, Jeffrey Dean Morgan's formerly bat-wielding villain is alive in the zombie apocalypse. And, according to comments from the people who make the AMC show, it sure seems that Negan will continue to stir up trouble — even from behind bars — when Season 9 premieres on Oct. 7.

In the Season 8 finale, Rick and Michonne spoke to Negan as he recuperated from Rick slashing his throat in the final battle with the Saviors. "We're not gonna kill you. We're not gonna hurt you. You're gonna rot in a cell," Rick said before Michonne interjected, "For the rest of your life, day after day." They said how he would be an example of their new way of living — where instead of killing one another, they would focus building a civilized society. As the Season 9 previews show, Rick has stuck to his word 18-months later since he appears to visit Negan in a jail cell, likely the one that Morgan built.

The world of The Walking Dead has jumped forward in time. While the full-length trailer certainly shows that not all will be well in the communities, it does highlight how there has been a period of peace after the war with the Saviors. Maggie might not be pleased, but Rick and Michonne were able to accomplish this without killing Negan. While Negan sits in a jail cell, the trailer shows that Rick visits his former nemesis from time to time to give him an update on humanity's progress.

Still, some things never change — and even though Negan has been locked away, he knows exactly the right things to say to get under Rick's skin. "Don't you ever get tired of acting like you're still in charge?" Rick asks Negan in the Season 9 trailer. To which Negan replies, "Do you?" And in the below teaser, Negan antagonizes Rick some more when he says, "You're not saving the world. You're just getting it ready for me." After all, can Negan really stay imprisoned forever? (And yes, readers of the comics do know the answer to this.)

Morgan's character heckling Rick is some pretty classic Negan. But apparently, Negan will also undergo some changes this season. Executive producer Greg Nicotero told ComicBook.com that there will be a bit of a redemption arc for Negan. "I can't say that we've shot anything near like that, but I think there is. We're going to find out a very different side of Negan quickly as Season 9 starts," Nicotero said. "And there's been a big kind of growing period of him trying to figure out how to not go crazy really in the position that he's been in."

Morgan added to ComicBook.com that he has welcomed this change in Negan's behavior. "It's been a really great challenge and really great fun as an actor," Morgan said. "I felt like maybe I was stuck in a rut, a little bit. I needed Negan to move on and we needed to see a different side of him. I think, be careful what you wish for, because now there is a different side of Negan that is front and center. Negan is having a hard time with what he is seeing in himself and these guys are really having a good time."

In an interview with IGN, new showrunner Angela Kang also discussed Negan's evolution. "Of course Negan is still Negan — he can't help but say things that are snarky or kind of rough, but we're gonna see some really different emotional shades to him. He's essentially been in solitary confinement for a year and a half since the end of last season, and one of the stories that we're exploring is what that's done to him," Kang said. "So that really shifts the nature of the interactions he has."

At San Diego Comic-Con 2018, Morgan also revealed that Negan will get to interact with more core cast members other than Andrew Lincoln this season. "Negan's also getting an opportunity to interact with some people that are up on this stage that he hasn't really had a chance to interact with before, which has been super fun for myself and Negan," Morgan said.

But it seems that Negan's Season 9 storyline will start just as it should — with him interacting with the man who saved his life. Morgan and Lincoln told ComicBook.com at Comic-Con how Negan and Rick will be having one of their prison talks in the second episode, "The Bridge." So even if you don't catch a glimpse of Negan in the Season 9 premiere, don't fret because he's still around. And he still has the ability to mess with Rick Grimes and could quite possibly even be the cause of Lincoln's exit.