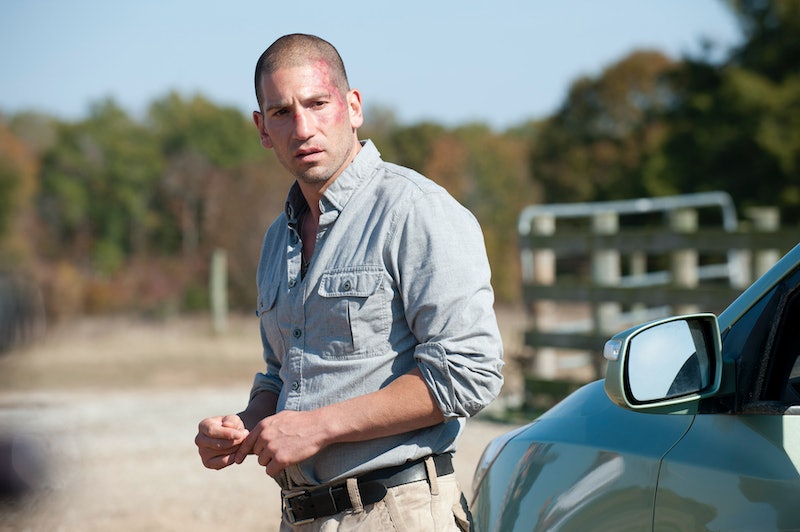 It turns out that zombies won't be the only thing getting resurrected throughout the course of The Walking Dead's ninth season. TVLine has leaned that Jon Bernthal is set to reprise his role as Shane Walsh, Rick Grimes' former friend-turned-foe when the series comes back in the fall, according to sources. But considering this character met a tragic demise all the way back in Season 2, some fans may find themselves wondering: how does Shane return to The Walking Dead if he's already, well, dead?

The outlet didn't provide any further information about how this shocking moment will come to pass and an AMC rep declined to comment when TVLine reached out about the casting news, so it's hard to say with any certainty. However, based on just pure logic it makes the most sense that Shane will return either as an hallucination of some sort, or in the form of a flashback from the days before the zombie apocalypse occurred.

For those in need of a bit of a refresher, Shane was a close friend of Rick's before the world became infected with the zombie virus. In fact, the two of them worked together as police officers. So when Rick was in a coma at the start of the show, Shane looked after his wife Lori and son Carl — perhaps a little too well since he ended up starting a relationship with Lori, thinking Rick had died in the hospital. Once Rick came back into the picture, things got awkward, to say the least, though things really came to a head once Shane was turned into a zombie and Carl killed him to save his dad's life.

Suffice to say, there can only be a very limited amount of ways Shane could come back without the story seeming unbelievable. Zombie Shane was definitely dead (even by zombie standards) at the end of Season 2, so a flashback or hallucination seems like the obvious choice for how Bernthal will show up. Otherwise, how would that make any sense? Granted, this is a show about a zombie apocalypse, so logic may not play as big of a role as one may think, but still. It'd be the best way to see the Shane we all came to know and love.

TVLine's sources also revealed that Bernthal's cameo won't last very long, and that Shane will reportedly only be in one episode of The Walking Dead Season 9. So, as nice as his return will be, it'll be short-lived.

Rumors of Shane's return to the series first began after Bernthal was spotted near the Walking Dead set earlier this month with his former costars Andrew Lincoln and Norman Reedus. Fans naturally took this as a sign that Bernthal would be making an appearance on the show, which clearly turned out to be the case.

This news may help to ease the pain of Lincoln's reported upcoming departure. Sources recently told The Hollywood Reporter that Lincoln will only appear in a handful of episodes for Season 9, and that Reedus is reportedly in the process of negotiating a lucrative new deal that would make him the new lead on the show. Lincoln has yet to confirm his departure, so take all of this will a grain of salt, but if that really is the case, then Bernthal's involvement will be a silver lining in this dark cloud of news.

Perhaps this is a sign that Rick gets bitten by a zombie and will start seeing a whole bunch of people from his past appear before his eyes, including Lori, Carl, and yes, even Shane. Let's just hope that however this happens, it brings Rick some semblance of peace.