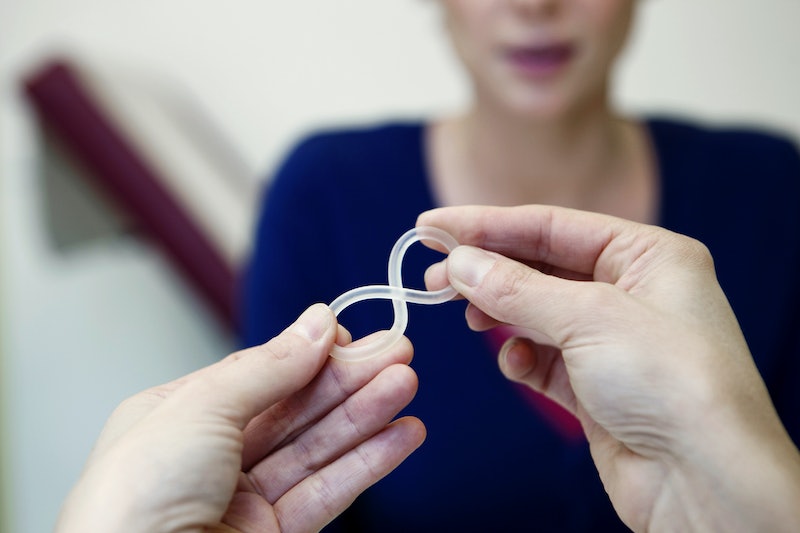 In this week's Sex IDK column, Emma McGowan, certified sex educator and writer, answers your questions about how the NuvaRing actually works.

Q: I don’t understand how the ring works... at all.

The ring — which is sold under the brand name NuvaRing — is a type of birth control that a lot of people have questions about! It’s not necessarily as self-explanatory as the Pill or the IUD (or maybe just not as common), so let’s get into how the NuvaRing works.

The birth control ring is a flexible plastic ring that contains the hormones estrogen and progestin. It’s placed inside the vagina for three weeks, removed for one week if the person using it wants to have a “period” (which is really a withdrawal bleed — more on that later), and then a new ring is inserted for another three weeks. People can also choose to skip the withdrawal bleed, if they want, by just inserting a new ring after they take out the old one. Just like skipping a placebo pill week of birth control pills, it's a totally safe option.

The NuvaRing works by releasing a low, continuous dose of estrogen and progestin into the walls of the vagina for up to five weeks. Those hormones — which are the same ones that are in most oral contraceptives, commonly called the Pill — prevent pregnancy by preventing ovulation.

Ovulation is when the egg is released from an ovary. It’s usually around 14 days before a person starts to bleed. (Day one of bleeding is day one of a new menstrual cycle.) So someone with a 28-day cycle will probably ovulate on day 14 of their cycle, while someone with a 32-day cycle will probably ovulation on day 18. For about 24 hours after that egg is released, it travels down the fallopian tube, which connects the ovary to the uterus. If it meets some sperm along the way, it might become fertilized and then will try to implant in the uterine wall. That, in a nutshell, is how a pregnancy happens.

In order to ovulate, you have estrogen rising in the first two weeks of your cycle, followed by estrogen dropping and progesterone rising in the second two weeks of your cycle. When you’re taking a hormonal birth control, like the ring, that cycle is interrupted. Without those ups and downs, that egg doesn’t get released. So if you want to prevent pregnancy, you can prevent ovulation. No release of the egg means no possibility of meeting any sperm, which means no possibility of pregnancy. Make sense?

Also, quick note: Your period is when your uterine lining sheds because you didn’t get pregnant. It’s part of the same hormonal cycle that leads to ovulation. Without ovulation, you can’t have a period. So if you choose to take the ring out for a week in order to bleed, that’s technically not your period! It’s actually called a “withdrawal bleed,” and it’s a reaction to not having those extra hormones in your body after having them for a few weeks.

The birth control ring, when used perfectly, is 99% effective at preventing pregnancy but with typical use it’s about 91% effective, according to Planned Parenthood. The top things that can lead to a person getting pregnant while using the ring as a birth control method is if they leave it in for longer than the prescribed three to five weeks, or if it’s outside of their vagina for more than 48 hours during the three to five week period they’re supposed to be wearing it. The ring also will not protect against sexually transmitted infections, unlike a barrier method like condoms.

So your best bet, if you’re using the ring for birth control, is to set reminders in your calendar app for when you need to switch it out. Set it for a time of day when changing it is convenient — like in the morning before you head out for the day or at night, when you’re getting ready for bed — so that you don’t just ignore it.

That’s a broad overview of how the ring works! If you want more information on the ring — including side effects, who shouldn’t take it, and what to do if you mess up somehow — check out Planned Parenthood’s comprehensive breakdown of everything ring-related.

And remember: If it ends up not working for you, there are lots of birth control options out there. Keep searching and you'll find the perfect fit.

More like this
35 Sexy Texts To Send Your Partner
By Griffin Wynne and Carolyn Steber
What Are Swingers? Everything You Need To Know
By Lexi Inks
13 Ideas To Add To Your Sex Bucket List
By Kristin Magaldi
Here’s How Lizzo Is Supporting Abortion Rights After The Roe v. Wade Reversal
By Brad Witter
Get Even More From Bustle — Sign Up For The Newsletter