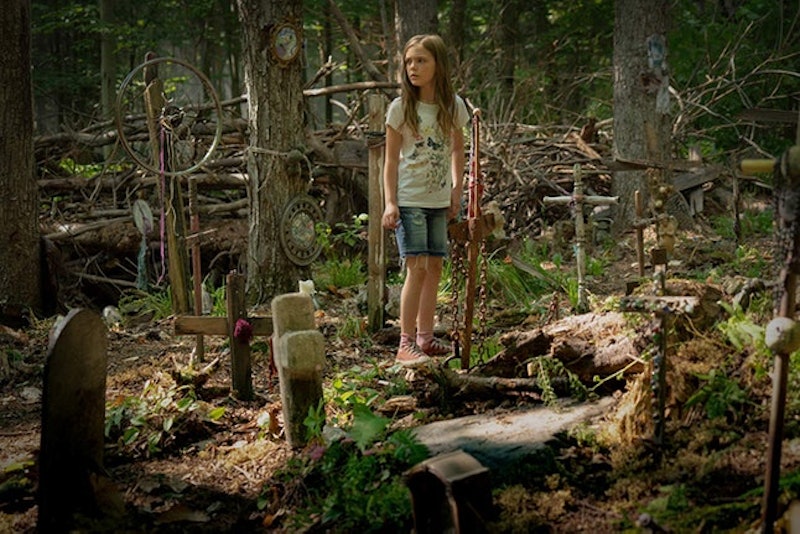 With the new Pet Sematary film adaptation coming out April 4, now is a fantastic time to brush up on your knowledge of Stephen King's famous 1983 horror novel. If you've found yourself struggling to remember how the "Pet Sematary" revives dead things, you're in luck. I've got everything you need to know about the powers of the titular cemetery before the movie comes out. Spoilers for the Pet Sematary book lie ahead, so consider this your warning.

First things first — What is Pet Sematary about? The novel centers on the Creed family — parents Louis and Rachel, and their children, Ellie and Gage — who relocate from Chicago to Ludlow, Maine. Their new neighbor, the elderly Jud Crandall, shows them all the local sights, including the Pet Sematary: an area where generations of Ludlow's children have buried their pets. Unbeknownst to the Creeds at the time, there is another, hidden part of the "Pet Sematary," from whence buried things sometimes come back to life.

As you might expect from a Stephen King novel, Pet Sematary follows Louis Creed as he proceeds to bury a number of once-living creatures in the real Pet Sematary — including Church, the family cat, and the couple's toddler son, Gage — ignoring Jud's warning that "Sometimes, dead is better." Both of them come back altered. Church returns to life with a new penchant for slaughtering small animals. Gage comes back and goes on a murder spree as soon as he is able, leaving Louis to stop the evil he has released into the world.

(It's worthwhile to note that the new film departs from the description above on several levels. For one, the 2019 adaptation of Pet Sematary swaps Gage for Ellie as the child who dies.)

So how does the Pet Sematary bring things back from the dead? Here's how Jud explains it in the novel: "The Micmacs... made this place, and they buried their dead here, away from everything else. Other tribes steered clear of it — the Penobscots said these woods were full of ghosts. Later on, the fur trappers started saying pretty much the same thing."

Jud goes on to say that "One of [the Micmacs] claimed he saw a Wendigo here and that the ground had gone sour," and that that is why the Native American locals abandoned the area now known as the "Pet Sematary." When Louis asks whether Jud "think[s] the ground's gone sour," he responds: "I think it's a dangerous place... but not for cats or dogs or pet hamsters."

So the short answer to the question of how the Pet Sematary works is one of the most classic, and most problematic, tropes of 1980s horror — it's built on an Indian Burial Ground. This is the explanation you've probably heard for the hauntings in The Shining, The Amityville Horror, and Poltergeist — even though Poltergeist specifically shoots down the idea that the haunted house in the film was built on tribal lands. Building on Indian Burial Grounds leads to all sorts of hauntings in '80s horror media, and in Pet Sematary, the graveyard, once "soured," is willing to give up its dead to spread evil throughout the world.

The Indian Burial Ground explanation is incredibly problematic, because, as this post on Never Dead Native points out, it assumes the Native Americans and First Nations peoples are all already dead. It also works by creating a force of unknowable evil for the white heroes to combat. On the surface, the trope appears to want the descendants of the original colonizers to atone for their ancestors' sins, but really, they're just expected to force the supernatural Other back into submission. Never Dead Native observes that "The Indian Burial Ground trope is successful because of its ability to stir up supernatural trepidation while also appealing to collective societal fears that have been ingrained into public consciousness for centuries."

The Wendigo, which was left out of the 1989 film adaptation, plays a critical role in readers' understanding of how the Pet Sematary works. Present in folklore from numerous Native American and First Nations tribes, the Wendigo is a symbol of greed, gluttony, and corruption. It is always hungry, always eating, but never satisfied. A human can become a Wendigo through possession by a malevolent spirit, or by engaging in cannibalism.

Church and Gage come back as mindless killing machines because they have been possessed by the Wendigo spirit that haunts the woods near the Pet Sematary. That possession allows Gage's reanimated corpse to spew a whole lot of adult language at its victims, who realize, just before their deaths, that the little boy suddenly knows things he should not. Whether the Wendigo in the new movie will work on Ellie's body in the same way remains to be seen.