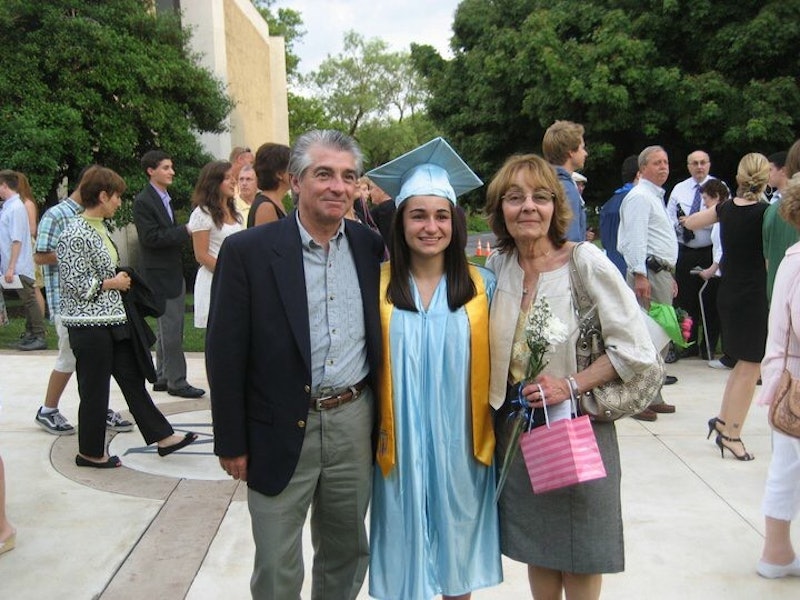 To say this election has divided my family would be putting it much too politely. My parents are convinced that President Donald Trump is going to "drain the swamp," but I think they just helped elect the Creature from the Orange Lagoon. My mom can't wait until The Donald makes America great again. My dad, who is a dead ringer for the bigoted Archie Bunker from the classic sitcom All in the Family, would literally rather have died than voted for Hillary Clinton, or any minority for that matter (you can imagine the things he's said about former-President Obama). Moving back home after college is tough enough, but it's even more difficult when your family voted for Trump.

As for me, I'm coping with Donald Trump’s presidency in the same way many people cope with a death. First came denial ("there's no way he's going to win the election…"), then anger ("how the holy hell could we let this happen?"), then bargaining ("maybe we can get the Electoral College to revolt?"), and finally depression ("this is going to be an agonizingly long four years..."). The last stage of the grief cycle is supposed to be acceptance. But I, along with 2.6 million other nasty women around the world, was not about to accept Trump without letting my voice be heard, which is why I decided to attend the Women's March on Philadelphia this past Saturday.

The night before the march, my dad couldn't resist heckling me. "You're going to Philly? Are you going to be marching with the sistas?" he asked me, alluding to the city's large black population. I ignored him and went into the kitchen. "Let me know if the march is in the neighborhood near Temple University!" he called after me.

My mom dragged me back into the living room to show me footage on Fox News of the riots that had erupted in D.C. during the inauguration. "There's going to be people there causing trouble. Stay away from them." I tried not to let it get to me. I wasn't going to let my mom's anxiety, or my dad's racism, deter me from attending the march.

On Saturday morning, I woke up at an ungodly hour and drove with my friend Sara in the dark to the Women's March on Philadelphia.

Our train car was packed with people headed to the march. We stood next to a group of older ladies wearing pink leopard-print pussyhats. They appeared to be in their 70s, and they were fierce as hell. In front of us, a group of teenagers were chatting. I even saw moms with small children. My mom wouldn't be caught dead here, I thought wryly.

When we got off the train, we headed to Logan Circle, which was the staging area for the march. It was an incredibly diverse crowd, an accurate reflection of South Jersey and Philadelphia's culture. Now this is what intersectional feminism is supposed to look like, I thought with pride.

The protest itself was invigorating, but what really gave me chills was reading about the protests all over the country. On the car ride home, I filled Sara in while she was driving. "There were only supposed to be 80,000 in L.A., but over 750,000 showed up; there were 175,000 people in Boston; the protest in Chicago was so large they had to cancel the march itself." Over 50,000 women had turned out for our march on Philadelphia, which more than doubled the city's expectations.

My uncle, one of the few family members on my side, texted me later: You were part of history. I wished I were going over to his house, so we could talk about the protest over a bowl of his famous homemade pasta. Instead, I was headed home to my parents'.

I felt another argument brewing. Nothing gets me going like my mom's stunning hypocrisy.

My parents were surprisingly interested in the protest when I got home. Babs (as I call my mom) was even willing to tear herself away Fox News to see my photos. She laughed at the clever signs, like the one that said "GIRLS JUST WANT TO HAVE FUNDAMENTAL HUMAN RIGHTS," but got mad at the one imitating Mean Girls that called Trump "a fugly slut."

"You know, this is what I don't like," she said. "You can disagree with people's politics, but don't bash them on a personal level."

I felt another argument brewing. Nothing gets me going like my mom's stunning hypocrisy — Trump is the king of petty insults. Granted, I do think she has a point that signs advocating for a cause like affordable healthcare are more constructive than the ones merely insulting Trump. But I wasn't about to admit it.

"Donald Trump bashed Hillary this entire time! He called her a 'nasty woman.'" (A phrase, I'm proud to say, that mobilized millions in all 50 states.)

“Well, she is a nasty woman who did all sorts of horrible things," my mom replied, alluding to Clinton's reputation for being crooked, colluded, and corrupt.

"So did he!" I began rattling off facts about Trump, from his fake university scam to stiffing his contractors, from racial discrimination in his apartment rentals to his sexual assault allegations. Really, the list drags on and on.

"He's a billionaire real estate mogul, executive, and celebrity," I countered. "How can you say that’s not a position of power?"

"That's not politics, though."

I laughed bitterly. "If you think big business has nothing to do with politics, you're delusional." It's these moments that frustrate me the most. Although I may win the argument, having the same fights about the same topics over and over with my mom prove that the battle is far from over.

While I hate to admit it, sometimes I feel embarrassed that my parents didn't go to college or aspire to have professional careers. Their endorsing Trump is an ugly reminder of how out of touch they are. At college, I took being part of a mostly-liberal and generally-woke campus for granted. Now that I'm back home, I can't forget that I come from a demographic that is literally Trump’s bread and butter: working class, less-educated white people.

What good is my fancy bachelor's degree if I can't even communicate my ideas effectively?

In the same way that I've reduced my parents to Trump-supporting rubes, I have to admit that I fit the stereotype of the bourgeois liberal snob a little too well. Sometimes, I catch myself being dismissive, condescending, and rude to my parents about their political beliefs out of sheer frustration and anger. Given that my household straddles a cultural divide of education, class, and ideology, I want to be able to talk to my parents about my feelings towards the Trump administration without our exploding in frustration. What good is my fancy bachelor's degree if I can't even communicate my ideas effectively?

Rather than shaming and ridiculing my parents and other Trump supporters, I'd probably get my point across more effectively by skipping the lectures. Instead of sneering at my parents for being conservative, I could do a better job of engaging them in a dialogue, rather than a long-winded diatribe. But it sure isn't easy.

So far, my contempt for their political views has been met with equal animosity, and none of us have really learned what makes either side believe the things we do. I'm not running for office anytime soon, and I know I can't change the opinions of large groups of voters across the country. However, my goal in the next four years is to at least find some common ground with the people I share a bathroom with. It may seem like Trump is trying to divide the country, but I'm not going to let his presidency divide my family. At least, not any more than it already has.