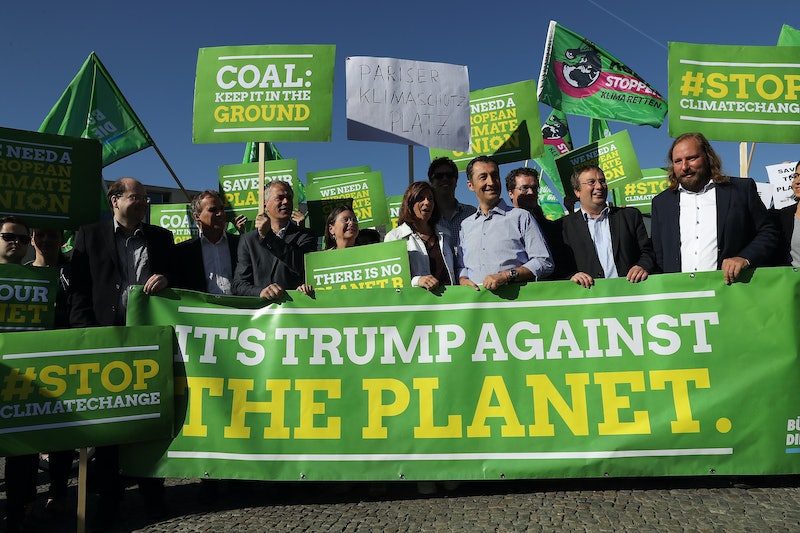 If you were upset by the news that President Trump pulled out of the Paris climate agreement last week, you’re definitely not alone — the United States is the second-largest emitter of greenhouse gases in the world, and the decision means our country is no longer officially committed to changing that, or otherwise combating rising temperatures by investing in greener technologies. But while it’s easy to feel helpless as we watch our own president deny climate change, it’s important to remember that we as individuals are not as powerless as we might feel. We may not have the authority to regulate how the world’s largest businesses operate, but we can make decisions in our own lives to cut down on our own environmental impact — and reducing or eliminating the amount of animal products we eat can make more of a difference than you might think.

You might believe that there's no connection between climate change and animal agriculture, but there is a proven link — raising animals for meat and dairy consumption (this includes the process of raising grains to feed livestock, as well as the process of raising livestock themselves) contributes vastly to air pollution, as well as other forms of environmental damage. According to the Environmental Protection Agency, the livestock sector is one of the largest sources of carbon dioxide pollution, and the single largest source of both methane and nitrous oxide. And the problem is getting worse: according to research published in the journal Nature, emissions are projected to increase 80 percent by 2050, as meat consumption and the global population explodes. According to the World Bank, animal agriculture is responsible for nearly 90 percent of Amazon rainforest destruction. Scientific American reported that we are losing more than 80,000 acres of tropical rainforest each day, while 135 animal, plant, and insect species a day (that's 50,000 a year) are lost due to this destruction.

Because animal agriculture leads to so much pollution, quitting meat and dairy can make a big environmental difference — according to research published in the journal Climate Change, by simply avoiding animal products, you’ll cut your carbon footprint in half. And even if you don't totally drop animal products, cutting down can make a big difference. According to researchers at The University of Chicago, if everyone in America had just one Meatless Monday a week, it would be the equivalent of switching all our cars from sedans to hybrids.

Even the U.N. has acknowledged that "a substantial reduction of [environmental] impacts would only be possible with a substantial worldwide diet change away from animal products.”

Maybe you’d like to be a part of that change, but you aren’t sure how to start moving towards a more plant-based diet — a totally understandable problem! Luckily, there are lots of people out there who’d like to help make your transition as easy as possible. I spoke with some of these leading experts to find their top tips for learning to leave animals off your plate.

Remember That It’s Not About Being Perfect

While going cold turkey (so to speak) works for some people, for most, moving towards a plant-based diet is a gradual process. You might start with a Meatless Monday, then go vegetarian, then eventually cut out a dairy food that’s easiest for you — whatever process works for you and creates the most lasting change is what’s best.

“It's not about being perfect, it's about moving in the right direction,” Nick Cooney, Executive Vice President of the non-profit animal advocacy organization Mercy for Animals and co-founder The Good Food Institute, tells Bustle. “Keep in mind no one is perfect and change takes time. If you don't think you can resist the craving right now, it's much better to have a burger once a week than to give up entirely on your desire to move toward plant-based eating.” This isn’t about perfection — every bit of change makes a difference.

Once you’ve made the decision to start trying to eat more plant-based foods, that bookmark tab is your friend. It’s important, however, to make sure your sources are credible, since you can find all kinds of unscientific advice if you only rely on Dr. Google.

Julieanna Hever, a respected nutritionist who’s known as “The Plant Based Dietitian,” has a list of very helpful nutritional resources worth bookmarking. No matter where you are, you can also use apps like HappyCow or Yelp to find veg-friendly options for eating out all around the world.

Erin Kwiatkowski, Global Vegetarian Support Manager at Mercy For Animals, also recommends the website Lighter World, which has great customizable menus and meal plans (many of which are free). If you're short on time and have the financial means, you can order plant-based meal kits from The Purple Carrot, or prepared frozen meals from Veestro.

When It Comes To Cooking, Start Simple

The internet is a rabbit hole of fun (and sometimes complicated) plant-based recipes, but it’s important to give yourself permission to start simple, especially if you’re not used to cooking much. Start searching for “vegan recipes” on Pinterest, Bustle, Google, or any of the above recommended sites, and bookmark what looks good.

“Look for recipes that sound easy and tasty and just follow the recipe closely. Eventually, you will pick up the skills in the kitchen to prep on the fly,” Hever tells Bustle. Think about all the foods you already know, like, and eat that are plant-based — like pasta, stir-fried veggies, nuts, cereal, fruit, rice and bean burritos — and just eat and cook more of them.

Kwiatkowski recommends starting with a few simple recipes you already love, and learning how to make them plant-based. “An example is pasta bolognese: feel free to cook it using the exact same ingredients and process, but instead of ground beef, add Beyond Meat's Beefy Crumbles. As a bonus, sub your normal parmesan cheese topping with Go Veggie's non-dairy grated parmesan,” she tells Bustle.

Another useful concept is batch cooking. “Once you are confident and comfortable with your favorite plant-based recipes, cook them in bulk so you're eating the leftovers for a few days. This process helps with decision fatigue, will save you money, and keep you from reverting back to old diet habits,” Kwiatkowski says.

Have A Plan For Cravings

Though some people are able to cut out animal products and never look back, for others, it's a bumpier road — so it’s good to have a plan for meat and dairy cravings, if they strike you.

If it’s in your budget, keep some alternative meats (some of my favorites include Gardein and Beyond Meat) in your freezer. For cheese and butter, you can keep products made by companies like Daiya, Kite Hill, or Miyokos products in the fridge. For ice cream, I personally find coconut milk ice cream to be the richest and most satisfying substitute. As for milk, everyone has their favorite alternative, but I’m partial to organic, plain, unsweetened soymilk without added vitamins — which I find works well in coffee without that weird aftertaste.

You also want to start paying attention to your cravings, and what they might really be about. “A lot of times, when you crave meat, what you're really craving is something fatty, salty, and savory. So look for plant-based dishes that check those same boxes, and make sure you're getting enough protein and calories,” Cooney says.

If you don’t want to cut out everything at once, you might want to take a pragmatic approach, and consider which foods will have the greatest impact. While eating red meat is certainly bad for the environment, Cooney suggests starting with chicken, eggs, and fish first.

“It takes almost 10 calories of grain to produce one calorie of chicken meat, which is more or less like taking ten plates of pasta and throwing nine of them in the trash can — something no environmentalist would want to do,” Cooney says. A recent report, titled Factory-Fed Fish: How the Soy Industry is Expanding Into the Sea, shows how fish farming also has a devastating toll on the environment, polluting waterways and spreading infectious diseases to wild fish populations.

In terms of reducing animal suffering, you’ll also be making the largest impact by starting with these foods. “The average American meat-eater consumes about 30 chicken and farm-raised fish each year (compared to less than one pig and cow), and chickens and farm-raised fish live in filthy, incredibly painful conditions. Egg-laying hens probably have it worst of all, with most packed in tiny cages for their entire lives,” Cooney says. Even if they are cage-free, the conditions are not much better.

Solidify Why You’re Doing This In The First Place

Find your strongest motivations for moving towards a plant-based diet and learn more about them. If the environment and giving the middle finger to Trump’s policies is your strongest motivation, read articles about the environmental impact of veganism, like this; if reducing animal suffering moves you, you can learn more about that here. If reducing your own risk for health problems from cancer to heart disease will help motivate you, read more about the health benefits of veganism here. And if you’d like to learn more about why this is also considered an intersectional social justice issue that affects POC and immigrants in particular, check out resources like The Food Empowerment Project and Black Vegans Rock, and learn about the work of these amazing vegan POC activists. No matter what your motivation, you can check out informative documentaries on Netflix or YouTube like Cowspiracy, Earthlings, or Forks Over Knives to learn more about what people are saying about the benefits of plant-based diets.

Keep Reaching Out For Support

One of the only things that’s genuinely sometimes difficult for me about being vegan is dealing with people who demand that I justify my diet to them. If people around you try to attack you for trying to make a positive change, remember your motivations, and try to feel compassion towards them for reacting so defensively towards you.

“Everyone around you who does not eat a plant-based diet will have an opinion about it and will try to change your mind,” Hever says. “Therefore, it is sometimes better to simply tell people you are doing an experiment so you do not need to discuss the details.” If that’s what makes you feel most comfortable, go for it. Remember, this is just about doing whatever will help you yourself create the most lasting and significant change — there’s no rush here to have to take a public and permanent stand on your diet, unless you’d like to.

Finally, it’s key to build your own support network. Use those free resources with live-chat coaching on sites like Choose Veg, and find a community of likeminded people to cheer you on. You can go to vegan food fests, conferences, meetups, or find other people trying to eat plant-based on social media. Join groups or pages on Facebook where you can raise any questions that come up and swap recipes. Finally, feel free to reach out to vegan activists and writers directly on Twitter (myself included) for support. The vegan community doesn't just want to help the planet; we want to help you, too.

More like this
10 Pumpkin Recipes That Are Way More Creative Than Pie & Lattes
By Rebecca Deczynski and Alexis Morillo
The 5 Best SLS-Free Toothpastes, According To Dentists
By Amy Biggart and Danielle Calma
TikTok's Butter Board Might Be The New Cheese Plate
By Emma Carey
Deliveroo Is Selling Lotus Biscoff Cinnabons Now
By Darshita Goyal
Get Even More From Bustle — Sign Up For The Newsletter