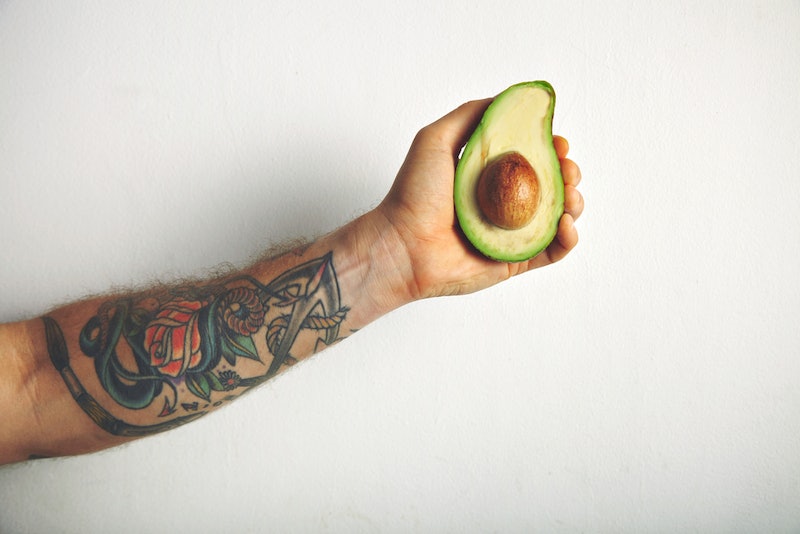 If you ask any vegan if their sex life is better now than it was when they ate animal products, you’ll probably get a resounding yes. The same is likely to go for meat eaters, too, because everyone tends to think they're already living their best lives. But no matter your relation to meat, being vegan affects your sex life just as much as being a meat and dairy eater does — that’s just simple math.

"Our sexual response is linked to a complex interplay between thoughts, emotions, touch, blood flow, and nerve functioning," Daniel Sher, a registered clinical psychologist and consultant for the Between Us Clinic, tells Bustle. "Because a healthy sex response depends on a healthy vascular (i.e. blood flow) system and normal brain-body connections, what you eat can affect your sex life."

No matter how you slice it, consuming more fruits and vegetables is going to have an effect on your body that's different from when animal products were part of your diet.

Because arousal starts in the brain, having healthy circulation will make sure there's nothing standing in the way of those initials twinges of desire. Once that's achieved, the blood starts flowing to other parts of the body — the genitals in particular, which is essential for arousal. The healthier the circulation, the easier it is for the blood to get where it's supposed to go.

Even if you're not vegan, you've probably noticed the difference in your body after having a salad for lunch versus a cheeseburger. It's all in how long it takes the body to digest the burger versus the veggies.

Intimacy and relationship coach, Kristen D'Amato tells Bustle that being vegan can lead to an increase in energy. As D'Amato, who is vegan herself, explains this doesn't just have to do with the all the veggies being put into your system, but how they're processed. (Veggies actually don't take longer to digest than animal products across the board, but their relatively high fiber and low fat content can move them through the system faster.)

But going vegan isn't all roses. It can have its negative effects too. "Veganism [can] potentially impact people's sex life in that in the body's sex hormones are produced from cholesterol," Paul Chek, founder of the CHEK Institute, an academy of holistic health for fitness and health professionals, and author of How to Eat, Move & Be Healthy, tells Bustle. The human body produces around 75% of the cholesterol it needs, and the rest needs to be obtained through diet. "The challenge there is that the only dietary source of cholesterol are animal products," Chek says.

As Chek explains, while most people can "get by" on a plant-based diet for a certain length of time, eventually some systems in the body will be compromised. "Since reproduction is a lower priority than faculties that allow us to survive 'in the moment,' such as fight or flight hormones, blood sugar hormones, and fluid regulation hormones," Chek says, "the result is that sex hormone production is sacrificed to maintain function in the other body systems."

But just as with omnivores, as long as someone's vegan diet is well balanced, and gets them all their vitamins and minerals, this shutdown is preventable.

“Your body is only going to shut down if it doesn’t receive proper nutrition for a prolonged period of time," Lara Heimann a physical therapist, certified natural foods chef, and certified holistic health coach, tells Bustle. "Any diet that is not well balanced is not optimal."

And because the brain is a part of your body, going vegan can also affect the mind. "Preliminary research suggests that vegan diets may have a positive impact on mental health and body image," Sher says. "Psychological well-being is an important part of sexual health, and if you’re able to eat a diet that helps protect against psychological conditions such as depression and anxiety, your overall libido ... is likely to be better."

Ultimately, some people will find that going vegan positively affected their sex life, and some who just don't buy it. Even the experts can't definitively say which is best.

"I’m personally a vegan who eats the occasional wild-caught fish, and I honestly don’t have strong recommendations either way," Anami says. "I have seen both vegans and carnivores with raging libidos, strong erections, and lubrication." Anami adds that following a food plan that gives you all the nutrients you need is the most important part of improving your sex life.

So if you want to get the most out of your sex life, get all your nutrients, and be aware of how different food products affect your body.

More like this
I Tried The $20 TikTok Viral Oishii Strawberries — Here's What I Thought
By Sophie Hanson
Why Experts Say Sleeping With A Fan On Isn’t Totally Risk-Free
By Sophie McEvoy
Trust Me, Pickle Martinis Are The New It Drink Of The Season
By Emma Carey
Here's Why Your Nose Runs When You Eat
By Carolyn Steber
Get Even More From Bustle — Sign Up For The Newsletter