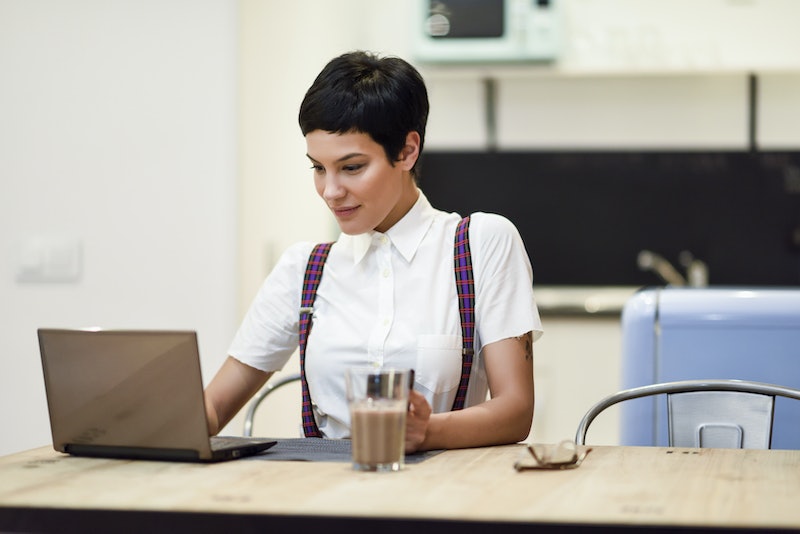 Coming out as LGBTQ in any situation is always a big decision, but for many people, social and cultural norms in the workplace specifically can create pressure to either come out or be actively misidentified. While coming out as LGBTQ at work is a personal decision that should be up to the individual employee, sadly, it appears that outside influences may be the deciding factor of whether someone does or doesn't come out at work — regardless as to whether what they actually end up doing is what they want to be doing.

According to recent research out of the University of York, surface-level innocuous questions from coworkers and the cultural expectations at play in the overall work environment may put serious pressure on people to either come out on the spot, or be pushed further into the closet. Unsurprisingly, this can turn into a waking nightmare for many queer people and can make employment environments harder to navigate.

Anna Einarsdóttir, a senior lecturer in organizational behavior, theory, and technology at the York Management School at the University of York, is the lead researcher behind the study exploring this uncomfortable phenomenon. To conduct her research, she examined six large public and private organizations in Britain, and found that even with the best intentions, heterosexual and cisgender coworkers can still agitate and isolate their LGBTQ coworkers.

Her research made this incredibly important discovery: When coworkers make assumptions about the sexual orientation or gender identity of a coworker, even if posed in a well-intentioned, friendly way, it can make life more stressful for LGBTQ people. And as we all know, work stress quickly translates into stressful, or even unsafe, work environments.

"Questions about partners can provoke disclosure of sexual identity," Einarsdóttir explains in a recent article on her study for the London School of Economics Business Review. "So can unwanted sexual attention, exposure to homophobic remarks and personal crisis affecting work performances."

And when you think about it, it makes sense: Under the guise of "office culture," we often discus personal information, such as the name of your partner or someone's recent engagement. These conversations generally happen under the assumption that these topics are "safe for work" and don't have the potential to be damaging for anyone. For LGBTQ people, however, this added attention can put them in a spot where they either feel the need to conceal their identity or come out due to pressure.

For some identities, the assumption of heterosexuality can also be damaging. For example, if someone identifies as bisexual or pansexual but has previously had a partner of the opposite sex, a coworker assuming that person is heterosexual can be harmful or uncomfortable. As Einarsdóttir points out, bisexuality is often considered "invisible" even within queer spaces, so to be the only bisexual person "out" at a job is no easy task.

As Einarsdóttir explains, even if someone is trying to be inclusive because they think they have great "gaydar" and can tell someone is LGBTQ based on certain stereotypes, this, too, is inappropriate and may cause an uncomfortable work environment for queer people.

She notes that many heterosexual people in her research were eager to believe in "stereotypes of lesbians and gay men ... generally portraying lesbians as ‘not feminine’, ‘quite plain’ and ‘not beautiful’ and gay men as ‘loud’, ‘effeminate,’ and ‘flamboyant’."

Unsurprisingly, this is a problem. Not everyone who fits a stereotype actually identifies with that group and vice versa (that is, people who don't fit certain stereotypes may still identify with that group) — and beyond that, even if you think someone does or doesn't identify with a particular group, it doesn't necessarily mean they want to come out to you, at that time, or in that place.

The lesson here is, of course, to never assume someone's gender identity or sexual orientation. Coming out is a challenge in itself, and beyond that, in many states it is still legal to fire someone for their sexual orientation or gender identity. Even if someone has the best intentions, or is trying to show how accepting they are of the queer community, outing someone is never acceptable.