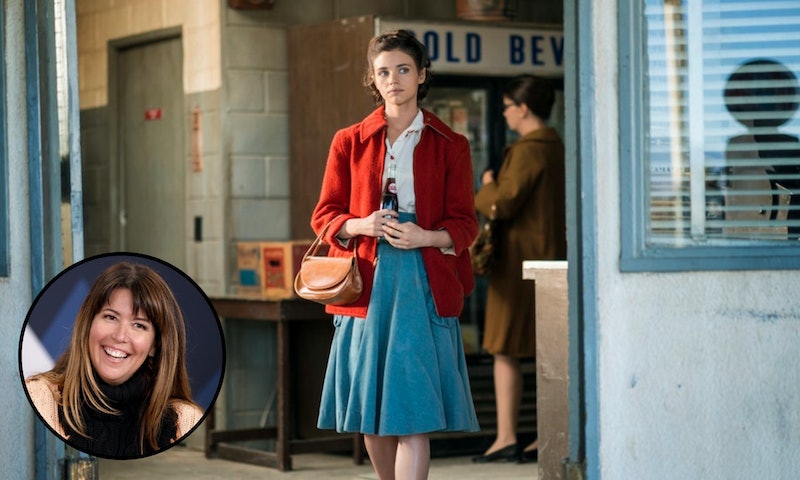 Though the Black Dahlia murder serves as the show's through-line, for director Patty Jenkins, I Am The Night was always about Fauna Hodel. The TNT series, loosely adapted from Hodel's 2008 memoir, recounts Hodel's search for her birth mother and the thorny family history she uncovers along the way. It's a tense, danger-packed thriller full of grim twists, but Jenkins says Hodel's light far outshines the darkness.

"I've gotten so close to the story that I feel like we actually were truly able to turn the darkness into light," Jenkins tells Bustle. "What's interesting here is I feel like Fauna won. She truly won."

After a mutual friend introduced the pair in 2008, Jenkins was immediately captivated by Hodel's story. She was a white woman raised by her adoptive black mother to believe she was mixed race, but after traveling to Los Angeles in search of her biological mother, she discovered that not only was that not true, but her biological family had a shadowy past. Her grandfather was George Hodel, a prominent gynecologist alleged to be the Black Dahlia killer. (As reported by The Guardian, George was a suspect in the 1947 case, but was never charged in connection to the crime). His daughter, Hodel's mother Tamar, also accused him of sexual abuse when she was 14, but George denied the claims and was acquitted after a trial.

Jenkins and Hodel remained close until Hodel's death in 2017, but Jenkins was hesitant to bring her book to life onscreen. "I remember going home and thinking, 'Oh, I don't know how to let this into my life,' you know?" she says.

Still, she was charmed by Hodel's warmth, and eventually tried shopping the series around. "It was stunning, but at the same time, the one who was telling me this story... was so bright and light and wonderful," Jenkins explains. "[I thought,] 'How is it that this story is possible? That this woman is such a ray of light?' And so, that was a show that I tried to go out and sell right then and there."

She wasn't able to get the show off of the ground at first, but continued to grow closer to Hodel and her family. "I just kept getting to know this warm and wonderful person against the dichotomy of her story," she says. Particularly when Jenkins was working on Wonder Woman, her massive 2017 success, she urged Hodel to let someone else tackle the project. But Hodel said it had to be her.

Now, looking back, Jenkins is glad her friend was so insistent — working on I Am The Night, which was written by her husband Sam Sheridan, has completely flipped her initial perspective about tackling such heavy material. "The story was a secret with a lot of power for a long time," she says. "And [Fauna] was threatened and shamed... into not telling it, as everyone was. By getting to tell this story, I feel, walking out of it, so clean and positive."

Jenkins acknowledges that the show has taken some creative liberties, but asserts that the narrative is "what [they] believe to be true." A notable choice was to include Chris Pine's character, a fictional reporter named Jay, as "a way to amalgam a bunch of different characters who knew [about George Hodel] and remembered that had been silenced."

Jenkins and Sheridan had Hodel's approval, Jenkins says, because she trusted their intentions. "I think the reason that we had connected so much is she knew that I cared about the core being a good and beautiful story and not exploitative of anybody involved," she explains.

As I Am The Night nears its finale, which airs March 4 at 9 p.m. ET, Jenkins hopes viewers will walk away with the same sense of victory she feels she gave Hodel. "I'm like, 'Wow, man, she won,'" Jenkins says with a sigh. "She told the story, and we didn't tear down the world to do it. And now everybody's free."