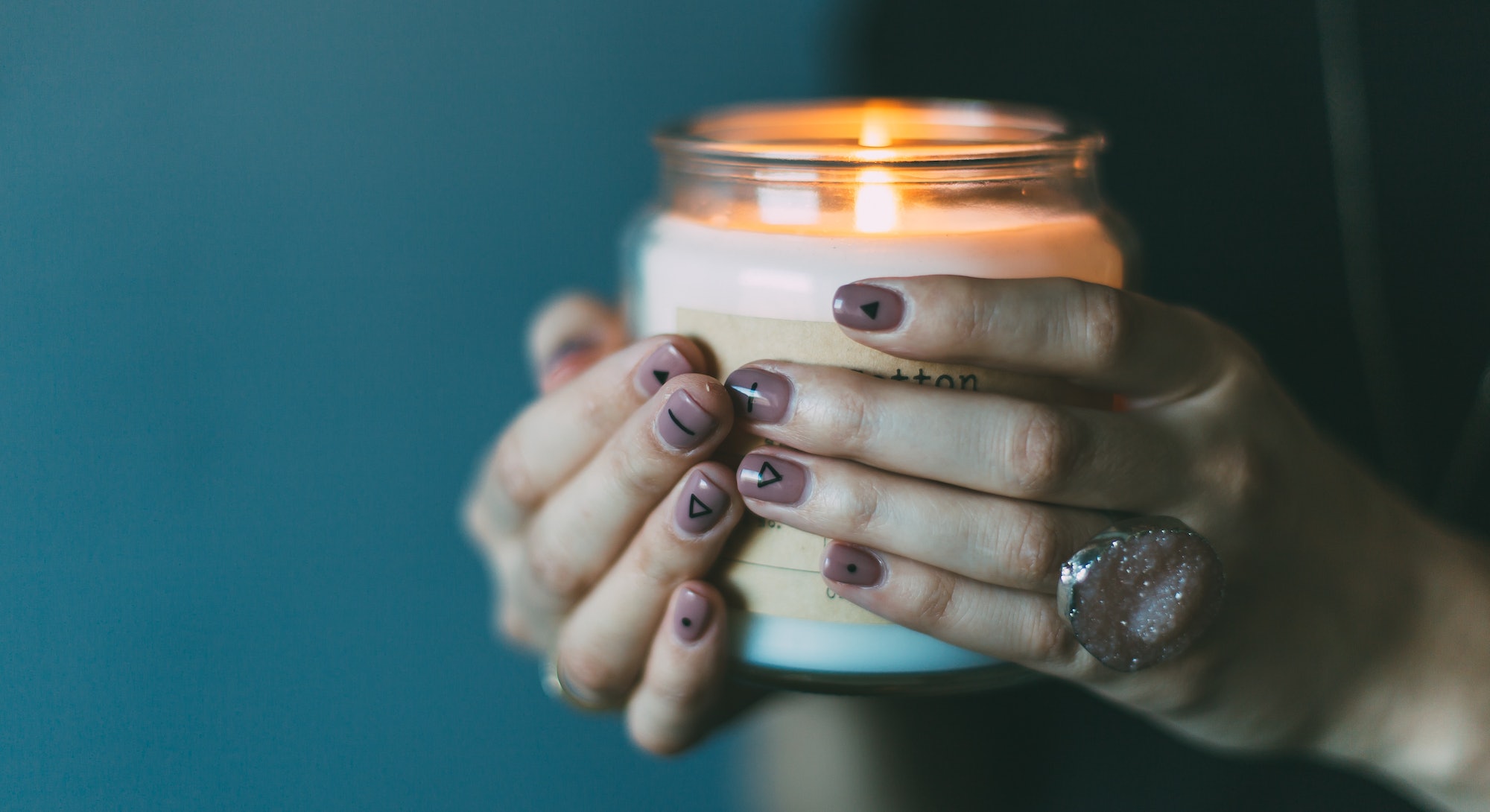 I didn’t know much about my grandmother Clara while I was growing up, except that I got my middle name from her, that we looked similar, and that she’d died before her time, falling victim to a brain aneurysm in the spring of 1974, when she was just 46 years old. But this summer, more than 40 years after her death, I learned a fascinating family secret: my grandmother may have been a "white witch" — a historic subset of spiritualists originating in Eastern Switzerland and Germany who have practiced magic solely for the benefit of themselves and others for hundreds of years.

I discovered all of this when, on a visit to my Uncle Gerry's home in Long Island last fall, I mentioned that I, like a lot of women my age right now, had recently developed an interest in the occult — which had led me to do numerology readings for friends, collect crystals, and carve candles under the full moon. I come from a German-Catholic family of businessmen, bankers, carpenters, and farmers from Western New York, so I was surprised when he gave me a knowing look and slid a deck of 78 Marseilles-style tarot cards, wrapped in a black silk handkerchief, across the table. The exchange was simple and matter-of-fact, but it left me wondering: could my recent interest in witchcraft be more than just a fad? Could I be unknowingly be delving into a facet of Clara’s personality and history?

My search into the more mysterious side of my grandmother’s nature began with the deck itself; it appeared to be a late ‘60s or early ‘70s reprint of a deck first created in Switzerland in the mid-1800s, suggesting that my grandmother must have picked up reading only in the final decade or so of her life.

I like to imagine my grandmother using the violets for her secret spells — just as I covertly collect the purple morning glories that grow in my neighborhood for my own metaphysical practice.

While sitting at my dad’s kitchen counter after dinner one night, I finally brought her up. “So, what’s all this about Grandma Clara’s witchcraft?” For the first time in my life, I was made privy to a series of witchy happenings that took place during their childhood. And while my father and uncles were never directly connected to her magic, their faded memories alone were enough to give me goosebumps.

For instance, one of her favorite pets was a black widow spider. “She adored that black widow!” my uncle Gerry recalled. “It was in a 10-gallon jar, right in the windowsill that you could see from the outside, in plain view.” According to her sons, the spider lived alone in a small entry room leading into the family’s two-bedroom apartment. The spider originally had a mate, but she killed him, a story my grandmother apparently loved to tell with great satisfaction.

Grandma Clara also loved to travel abroad alone, often returning with female effigy figures (though no one’s really sure what she did with them).

“She was also really good at growing African violets,” my uncle told me, “which I thought was weird because it was really dark, we didn’t have a lot of windows, and I always wondered how they grew without light.” Whether or not my grandma was using white witchcraft to keep the notoriously difficult flowers alive or just had a green thumb is anyone’s guess; but African Violets also fairly well-known in the witching world for their powers of protection and their ability to enhance one’s spirituality, and are commonly used in spells for such purposes. I like to imagine my grandmother using the violets for her secret spells — just as I covertly collect the purple morning glories that grow in my neighborhood for my own metaphysical practice.

However, according to my dad and uncle, their mother’s main witchy attraction was the tarot readings and ouija board seances she used to host for friends in their apartment growing up as teenagers. “She did it a lot at social events,” my dad told me. “All of the sudden there would be some conversation and the tarot cards would come out.” Grandma Clara never charged for her readings, and she never did readings for her children. She was also fairly secretive about where she picked up her cards, boards, and planchettes, though she did mention her affinity to Lily Dale, one of America’s oldest and most renowned spiritualist communities, which happens to be located a convenient 45 minutes south of Buffalo. According to my uncle, Grandma Clara was very insistent on delineating the “good” nature of her practice.

And while some of the cool stuff I learned about my grandmother was witchy, some of it was just relatively badass for a woman of her time. After getting married at just 19 years old, Clara put herself through college and worked at the credit department in Sears to fund her travels, at a time when American women were just entering into the workforce. My grandfather was apparently very unhappy about this, but she did it anyway. She never wore dresses, only blue jeans and plain white sneakers. She drank Tia Maria, a coffee liqueur commonly used in a cocktail appropriately named the “Witch’s Tit.”

This was the first time I learned that my uncle was initially chosen to be her apprentice.

But the stories of Grandma Clara's independence and her witchy proclivities were not all charming and lighthearted — there were dark tales, too. “I do know at one time she was doing a reading and she mentioned that the message the cards were conveying were not a… very optimistic future,” my dad told me. “She said she did not reveal what the cards indicated. I think it had something to do with death.” According to my uncle, she lamented that one day, she was doing a Tarot spread for a friend, and indeed, saw an ominous future, but did not tell him the truth about what she saw. Soon after, these bad things actually happened to the man. She got scared, folded the cards up in that black piece of silk for good, and retired from her practice.

“That’s kind of how I became aware of her tarot cards,” Gerry said. “She wanted to know if I wanted to learn them because she was not going to read the tarot anymore.” This was the first time I learned that my uncle was initially chosen to be her apprentice. According to Gerry, my grandmother was insistent when teaching him how to read that" you have to be 100 percent honest with the cards," regardless of the outcome you foresee.

A few years later, at her funeral, my father and uncle also recalled seeing several mysterious strangers pay emotional tributes to their mother at her casket — another glimmer of the secretive and independent life she apparently kept apart from her family. “I remember one was an African American gentleman, another was a Caucasian, or maybe Latino man,” my Uncle Gerry told me. “They didn’t talk to anybody. They paid their respects and left, and it turned out no one in the family had ever seen them before.” I later asked myself: could this have been her coven? Evidence of an affair? Or simply another instance of my grandmother’s double-life during a time when women had just begun to break free from traditional gender roles?

“Most people don’t get into magic because their lives are easy.”

There were also several inexplicable things that happened around the time of, and right after, her sudden passing. For example, there was the last-minute portrait she commissioned for herself right before her death, which I now keep framed on my altar. Her out-of-the blue, final apology to my father, right before she passed, about how she regretted not letting him and her eldest son, Dave, grow up more slowly. There was the massive apartment fire several years later that destroyed nearly every family photo of my Grandma Clara in existence. And there was the fear in my father’s expression after I asked him what he thought about me taking up my grandmother’s cards and following in her footsteps, which made me truly wonder about the extent of her talents.

“Be careful,” my dad told me, his blue eyes once again, becoming distant. “Be true,” my uncle added. “There was something more there."

I later asked my witch friend, Annabel Gat, resident astrologer at Broadly, what she thought about my grandmother’s practice, her pet spider, and everything else. “It sounds like she was extremely witchy,” Annabel confirmed to me. “In general, spiders have a lot to do with protection. They keep the bad energy out, because their webs kind of trap everything.” Likewise, Annabel theorized that the female figures she collected may have also been used to keep bad omens away. “You can use these effigies as symbols for yourself,” she explained. “She may have gotten one and consecrated it and used it to anoint with oils, or to treat very kindly, to help her stay healthy and protected.”

When I asked Annabel about what might have been going on with my Grandmother to warrant these kinds of spells, she paused. “Most people don’t get into magic because their lives are easy,” she told me. “I don’t think she would be doing protection spells just for fun.”

I wish I could ask my grandmother what she was protecting herself from, what her dreams and ambitions could have turned out to be if she had just lived a little bit longer. As a fierce, independent woman, ahead of her time in more ways than one, I like to think she was protecting herself from the expectations of society — a husband who didn’t want her to get a job, a working-class hometown she traveled so frequently to escape, an innate knowledge of something far beyond the physical world she lived in, and a fear of the power she held within her.

Since my family and I started talking more about Grandma Clara, I’ve also learned of several other family members, both living and dead, who claim to have clairvoyant and supernatural powers. I’ve been sworn to secrecy, and am not going to go into it any more than that — but suffice it to say, her legacy lives on through multiple threads in our bloodline.

Though I regret not getting to know her in real life, I know my grandmother is with me in spirit, as I shuffle her cards, light candles at her altar, and continue her legacy of witchcraft. Through spells, stories and white magic, I intend to get to know her better over the coming years, and to trust and develop the instincts that first led me to uncovering her practice.