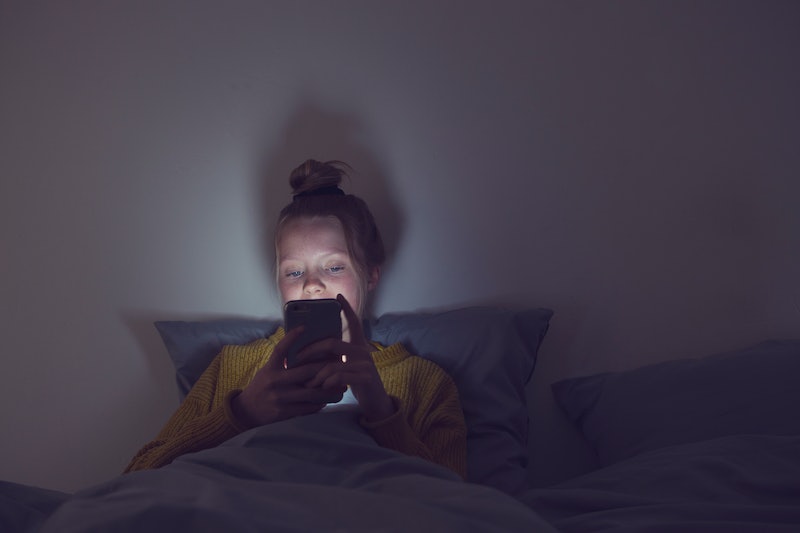 If you have an Instagram account, then you're probably familiar with the excited feelings you get when you receive a bunch of likes for a post. But that chemical reaction can actually cause negative psychological effects for many people, even though it feels like a boost when it happens. So before you get upset at the thought of losing the "like" button, you might want to know how Instagram removing "likes" actually impacts mental health.

Starting the week of Nov. 11, Instagram began testing the removal of likes for "some" users in the United States, per Instagram's CEO Adam Mosseri, who talked about the change while attending Wired 25, a tech symposium. He said the change would only happen across the board once the company was able to better see "how it affects how people feel about the platform." So the utter removal of "likes" across Instagram is not yet a done deal — but Mosseri's reasoning for why the platform is testing this change is super relevant.

At Wired 25, he explained that the intent was to "depressurize" Instagram for younger users in particular. He continued,

It's about young people. The idea is to try to ... make it less of a competition and give people more space to focus on connecting with people that they love, things that inspire them.

While lots of influencers have criticized the move, others think hiding the "like" button could be an overall positive thing. Kim Kardashian spoke out in favor of it during an appearance at the New York Times‘ DealBook Conference, an organized event calling together "innovative thinkers and business leaders," on Nov. 6. Per People, she said, “As far as mental health… I think taking the likes away and taking that aspect away from [Instagram] would be really beneficial for people."

In a 2017 survey by The New Statesman, one teenager described Instagram likes as a crucial "indicator of social standing." The anonymous participant continued, “As someone who gets anxious and occasionally struggles with self-esteem, the amount of "likes" on my posts can be both hugely uplifting or depressing.”

In 2019, there's extensive evidence to prove that people experience a chemical thrill by receiving notifications on phones — and yes, by receiving "likes" on Instagram. "Receiving a 'like' on social media feels good and produces a physiological high by triggering our 'reward cycle.' This rush or good feeling is due to dopamine," Dr. Jennifer Dragonette, PsyD, Executive Director, Northern California at Newport Academy, a teenage rehabilitation center, explains to Bustle.

"As a result, the more shots of dopamine that one receives, the more they will want," she continues. "In fact, research has found that the same brain circuits that are triggered by eating chocolate or winning money occur when teenagers see a large of number of “likes” on their own photos."

Dr. Dragonette pointed to one Journal of Psychological Science study that showed teenagers were more likely to "like" a photo with many likes than one with few likes. The study, titled "The Power of the Like in Adolescence: Effects of Peer Influence on Neural and Behavioral Responses to Social Media," concluded that "viewing photos with many (compared with few) likes was associated with greater activity in neural regions implicated in reward processing, social cognition, imitation, and attention."

Of course, Instagram "likes" aren't the only aspect of social media networks that encourage you to keep opening the app. According to Addiction Center, an informational web guide on addiction and addiction disorders created and maintained by researchers and journalists, behavioral addiction to social media can also be fueled by other aspects of social platforms besides receiving likes. For example, social media can often be used as an unhealthy coping mechanism for depression or loneliness, the site reports, even without the likes.

"Removing visible 'likes' from the platform may very well reduce the potential harm that comes from social comparison and online performance meant to impress one’s peers," Dragonette says. "However, there are still issues around instant gratification and pressure to appear a certain way that could lead to social media addiction even in the absence of visible 'likes.'"

With that said, it's possible that the removal of "likes" is a step in the right direction, but not a cure-all. So if you're concerned about your personal relationship to Instagram or to social media in general, you might consider trying out one or many of these tips on how to check your phone less often.

Sherman, L. (2016) The Power of the Like in Adolescence: Effects of Peer Influence on Neural and Behavioral Responses to Social Media. The Journal of Psychological Science https://journals.sagepub.com/doi/abs/10.1177/0956797616645673