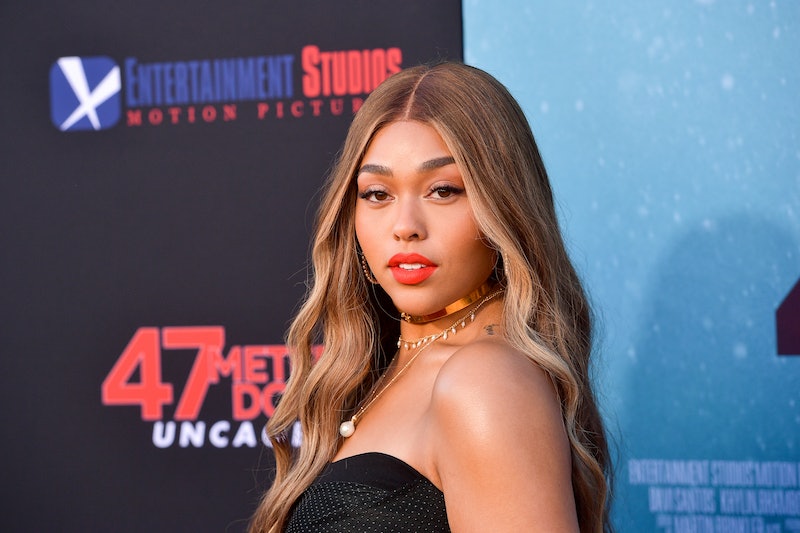 It's been months since Jordyn Woods had a public falling-out with her best friend, Kylie Jenner, and the rest of the Kardashian-Jenner family. Now, in an interview with Teen Vogue, Jordyn Woods described how she's moving on post-Kylie Jenner drama and how she's focusing on being her very best self.

Woods addressed a myriad of topics in her revealing Teen Vogue interview, which was published on Aug. 22. Of course, one of the biggest topics she addressed tied back to the February scandal that involved herself and Khloé Kardashian's then-boyfriend, Tristan Thompson. As for how Woods has been handling the stressful situation, she told Teen Vogue that she is moving on in the best and most positive way she knows how — by simply trying to focus on herself.

“Everyone is trying to figure out what I’m doing but, to be honest, I don’t know what I’m doing. I’m finding my self worth,” she told the publication. “At 21, this is the very beginning, even though I feel so old. This is the time you figure out who you are, and don’t let anyone define you.” While she noted that she's focusing on herself, and finding her own self worth, she did say that it's not always the easiest thing to do. "Identity is something everyone struggles with. Everyone wants to fit in and find their place, and it’s so hard sometimes," she said. "Everyone tries to be the same person because they don’t know who they are.”

In addition to concentrating on her own well-being following all of the public drama, she also noted to Teen Vogue that she's picked up a handful of positive hobbies to keep her mind off of any negativity. "When all this stuff happened, I stayed in and I started a lot of hobbies,” she said, relating that she's taken up painting, doing puzzles, and has spent even more time journaling. "You don’t have to pick one thing,” Woods said, which is good advice for anyone to take note of. “Some people are more privileged, but we all can really choose who we want to be.”

As a refresher, Woods previously came under fire back in February when sources such as TMZ and Hollywood Unlocked reported that she was spotted getting close to the Revenge Body star's then-boyfriend at his house during a get-together. Woods would later appear on Jada Pinkett Smith's Red Table Talk Facebook Live show during which she denied being intimate with the Cleveland Cavaliers player.

Following the news of their hangout, Kardashian and Thompson split and Woods' friendship with Kardashian's younger sister, Jenner, was on the outs. As for how the former besties stand today, there's no telling what the future holds. When asked about whether she went through a friendship breakup with the makeup mogul, Woods looked up the definition of a breakup and told Teen Vogue, “'The separation or breaking up of something into several pieces or sections. The end of a relationship.' Those are the two things. What I’d ask is, 'Does anything really end? Or is it a cycle?'”

While there may or may not be room for reconciliation between the two former friends, one thing is for sure: Woods is done letting any of the drama get in the way of living her best and most positive life.