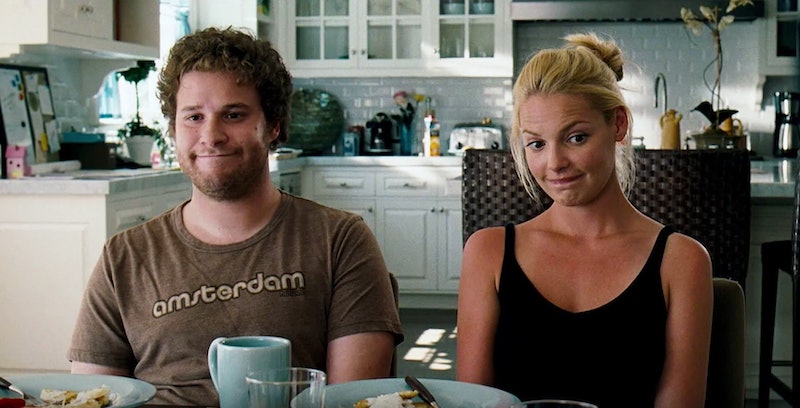 It's not an entirely new rom-com setup to tell the story of opposites attracting, but back in 2007, there was something fresh to Knocked Up's unconventional approach to this otherwise-tired idea. The film tells the story of the unlikely romance between career-oriented Alison and loafer Ben as they navigated an unplanned pregnancy after their one-night stand. In retrospect, one of the more problematic parts is how Knocked Up handles abortion. It is also, surprisingly, one of the most progressive moments in the film.

In Knocked Up, the doctor's confirmation of Alison's pregnancy brings a serious reality check, and as the movie's editing implies, both Alison and Ben decide this pregnancy is important enough to tell those closest to them. Counter to cinematic expectations, both Ben and Alison are told by different respective friends and family members that she should get an abortion. This is where Knocked Up gets a little too problematic for my liking.

When Alison tells her mother that she's pregnant, there an instant answer: abortion. Without blinking, her mother tells her that that's what she should do. In her opinion, if Alison "takes care" of the baby now, she can have "a real baby" when she's ready. Her mother even uses Alison's stepsister as anecdotal evidence that abortions works: She had one when she was younger and later ended up married with kids, presumably "fulfilled." Not like Alison, who would be a pregnant working mother and totally unprepared for the roller-coaster of motherhood.

Of course, Alison rejects having an abortion. The baby she's carrying is real, and the shock of her mother denying the legitimacy of her pregnancy stings to watch — at least for me.

Meanwhile, Ben's left to fend off gross suggestions of abortion not from his father (who is supremely enthusiastic about the baby), but from his do-nothing, schlubby friend Jonah. Jonah's suggestion of an abortion (or "schmaschmortion," as he euphemistically puts it) is only thrown out there so Ben to offer him a chance to be relieved of any real responsibility, so he can continue to do nothing in his life but smoke weed and chill with his friends. Again, not exactly the most reasonable or sound argument. It also reinforces the idea that men shouldn't feel compelled to participate in their partner's pregnancy.

As casually as abortion is suggested by Alison and Ben's mother and friend, respectively, and as problematic as it is to hear their reductive reasons about why their lives will be irrevocably messed up if they should have the baby, Knocked Up does something I consider to be a radically feminist act: Alison has the baby, and Ben actually makes an effort to step up to the plate.

Alison doesn't have the baby to spite her mother, but rather because she decides it's the right time for her to do so. Over time, it's made clear that this is what she wants. It becomes a choice on her terms, as shown when she calls Ben to tell him she's still going to have the baby and he can either stay or go. But Ben jumps all the way in with her. The idea of fatherhood slowly appeals to him, and it's enjoyable to watch.

It's this kind of unabashed unity between the two unlikely parents that makes having the baby feel positive, despite those whom they love and trust telling them they're either dumb or reckless for doing it. It's a feminist act on Alison's behalf because it supports her right to choose what's best for her. Merely suggesting an abortion (something Alison likely has access to and can do safely) doesn't equal progressiveness; letting her choose and letting that choice come from her own reasoning is what tips Knocked Up in favor of feminism.

More like this
Ryan Gosling’s Ken Just Got The Seal Of Approval From His Partner Eva Mendes
By Rachel Mantock
At 28, Emma Thompson Was Already A Star — But Unhappy In Love, Actually
By Olivia-Anne Cleary
16 Novels That Paint A Realistic Portrait Of Abortion
By K.W. Colyard
What Does The Presley Family Think Of 'Elvis'?
By Arya Roshanian
Get Even More From Bustle — Sign Up For The Newsletter