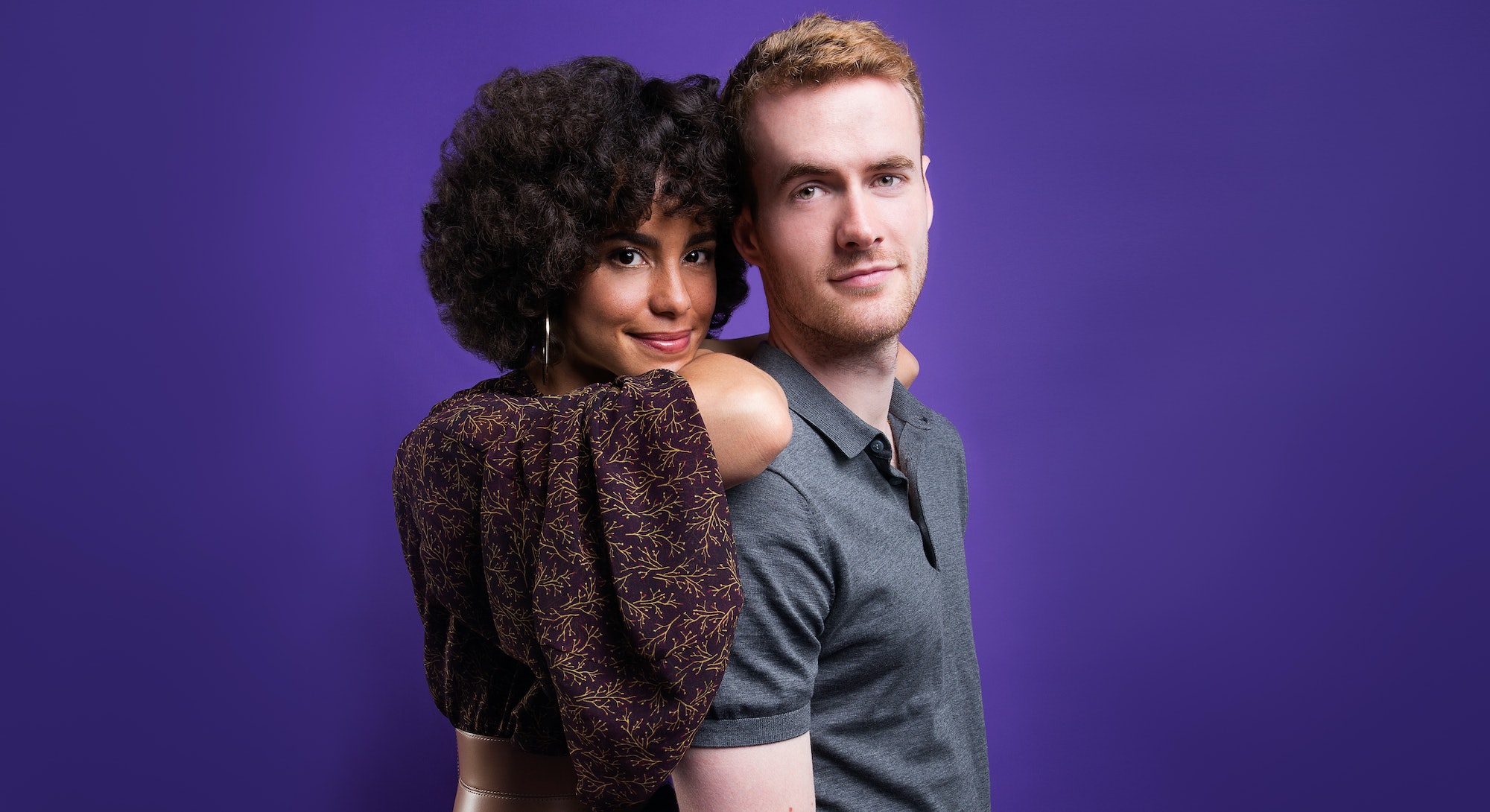 Despite the fact that they’re playing Prince Harry and Meghan Markle on TV, Parisa Fitz-Henley and Murray Fraser don't actually look like them — at least not in real life. There are some similarities: In person, the stars of Lifetime's Harry and Meghan: A Royal Romance are both tall, which is accurate. Fraser is white and Fitz-Henley mixed-race — also accurate. But the physical similarities end there.

It's a few days before A Royal Romance premieres, and about two weeks before the real-life couple's nuptials, and what strikes me as the most noticeable difference between the actors and the royal duo is their hair. Fraser's lies somewhere between light brown and carrot orange, likely the result of his fading Prince Harry dye job, while Fitz-Henley has a full head of fluffy curls, a stark contrast to the dark straightened hair we always see on Markle, but just as enviable. And just like two regular people who aren't actually Meghan Markle and Prince Harry, their opinions on the royals are those of outsiders who are free to judge them or be just as intrigued by the intricacies of their lives as the rest of us commoners. So yes, Fitz-Henley and Fraser are about to become known for playing one of the most famous couples in the world, but their personal plans for the royal wedding are probably similar to yours, depending on where you fall on the Royal Family fan spectrum.

"I don't know if I'll watch the whole thing. Coverage is, like, five hours or something like that. I'll watch a highlight reel," Fraser says, sitting on a small leather couch next to Fitz-Henley. "I'll watch them do the 'I do's' and walking down the aisle."

Fitz-Henley was similarly lukewarm about watching the real-life woman she plays on television get married up until recently, when new details of the wedding got her more excited. "I read that Kensington Palace put out this announcement of what was going to go down, and it just endeared them to me all over again and made me want to [watch]," she says. "I'm really curious about the different details that they've chosen, the people that they've chosen to include. There seems to be a lot that's unconventional about it."

Their thoughts on the royals have a lot to do with where they're from; Fraser is Scottish and Fitz-Henley was born in Jamaica but has spent much of her life in America.

"Being British, you kind of know stuff anyway ... even if it's subconsciously," Fraser says. "I think with Will and Kate having their third kid and stuff like that, you pick up a newspaper in London, it's going to be the first 10 pages anyway." Fitz-Henley says that the royals were in her "peripheral vision in a sense," the way they are for many Americans, but that watching Harry and Markle's engagement interview is what piqued her interest in the couple, and in Markle specifically.

"I just had a lot of friends who I really respect who are not usually celebrity folks, not usually into celebrity news, but who were really responding to [the interview]," she says. "So I was like, 'Let me give it a shot, I'll take a look at it.' And I was really touched by how grounded and authentic they were, how supportive they seemed of each other. And I'm just very interested in the way that Meghan carried herself. She seemed like a very intriguing person to me."

But before the engagement, following the royals for their celebrity alone wasn't exactly something Fitz-Henley was into. "I wasn't interested when it was just about having a baby or falling in love with somebody — I mean, those things are important, but I have friends that are doing that," she says. But this new couple, she says, seems to be breaking barriers. "When I see the kind of platform they have and the way that they're using it, I'm really impressed and it makes me interested in the initiatives that they're into and just definitely makes me want to pay attention."

There is a lot that's unconventional about Markle and Harry, besides the way they're planning their wedding, as Fitz-Henley mentioned. Markle is a 36-year-old biracial divorced American actor; any one of those descriptors would make the woman marrying the sixth in line to the throne stand out, never mind all of them together. As for Harry, he always been the "wild" prince, but in recent years he's brought attention to the Royal Family for different reasons, from his charitable work to his feminism to his outspoken support of mental health awareness that is unprecedented for the Royal Family.

A Royal Romance tackles these topics, though it perhaps surprisingly focuses most on the role race plays in Markle and Harry's union. A Lifetime movie about a royal love story that includes the n-word (spoken by Fitz-Henley's Markle as she tells a true story about her mother) is probably not what viewers will expect, but it's true to Markle's experience, and that's something that both Fitz-Henley and Fraser appreciate most about the the movie. It doesn't "shy away" from talking about race, as Fraser puts it.

While roles specifically made for mixed-race people are few and far between, A Royal Romance is not only about biracial person, but one who exists in real life. Being mixed-race herself, Fitz-Henley related to Markle right away.

"I don't see a lot of roles for someone who's specifically biracial and the particular experiences that can come with that," she says. "This movie deals more with people's reaction to her blackness than her whiteness — or than [to] her mixed-ness, I should say. But it's really intriguing to me to play anybody who has that experience and I hope there are more opportunities, because there is a tremendous amount of diversity within each ethnic group and I think that sometimes Hollywood hasn't seen that very much."

While there are many parts in the film that bring up race (some more successfully than others; there is an unfortunate cringe-worthy scene featuring Queen Elizabeth II at the end), one that actually will be touching for any mixed-race viewers (this one included) is when Markle talks to Harry about being asked, "What are you?" as a kid. This spoke to Fitz-Henley, as well.

"I remember so vividly as a kid having people come up and ask me, 'What are you? What are you?' Trying to answer truthfully pretty much never went well, because the question of, 'What are you? I'm curious,' [really meant] 'Who are you aligning yourself with?' Which I know as an adult now really means, 'What do you think of me? Do you care about me enough to identify with me?'"

As for Fraser, it might seem that it would be harder for him to make a connection with his character, an actual prince. But while he says he could "relate to the human aspect of him" — he says Harry is "an endearing guy" with a big heart — Fitz-Henley thinks they have much more in common than he realizes.

"I'm gonna argue with you on this one," she says to her co-star directly. He giggles slightly and says, "OK," then tries to toss an empty water bottle into a wastebasket across the room and misses. She jokes that she doesn't know if Harry is a basketball player, but Fraser clearly isn't.

She tells a story about a lunch they had together after their chemistry read for the movie. "The thing I noticed as we were talking was that Murray was thoughtful and wise in unexpected ways." Fraser leans further into the sofa's armrest and buries his head in his hand. "Your perspectives on feminism, your perspectives on the environment, and animals and their welfare. These were really well-thought out and really thoughtful and forward-thinking, and I remember sitting across from you thinking, I bet you this is what it was like for Meghan talking to Harry for the first time where you were like, 'Oh this guy's the real deal. Interesting.'"

While they might not look like their characters in person — or even think like they're that much like them, in Fraser's case — in the movie Fitz-Henley looks so much like Markle that it's hard not to feel like you're just watching the actor-turned-duchess herself. As for Fraser, well, it definitely helps when "Harry" is wearing a beanie. (He's certainly much more of a lookalike in the film than the original press photos let on.)

When it comes down to it, though, Fitz-Henley and Fraser seem less concerned with superfans being able to fantasize about the love story than they are about viewers recognizing Markle and Harry as real people who regardless of their fame are a lot like the rest of us.

"I hope that people see these individuals as human beings and not just headlines," Fitz-Henley says. "This world right now is really lacking in identification, identifying with each other, and I hope that this helps people get a little more interested in identifying with somebody who they perceived to be different from them but probably isn't that different at all."

Fitz-Henley and Fraser are sitting in a similar way to how Markle and Harry did during their famous engagement interview. And with words like those, it's clear they're channeling their counterparts in more ways than one.