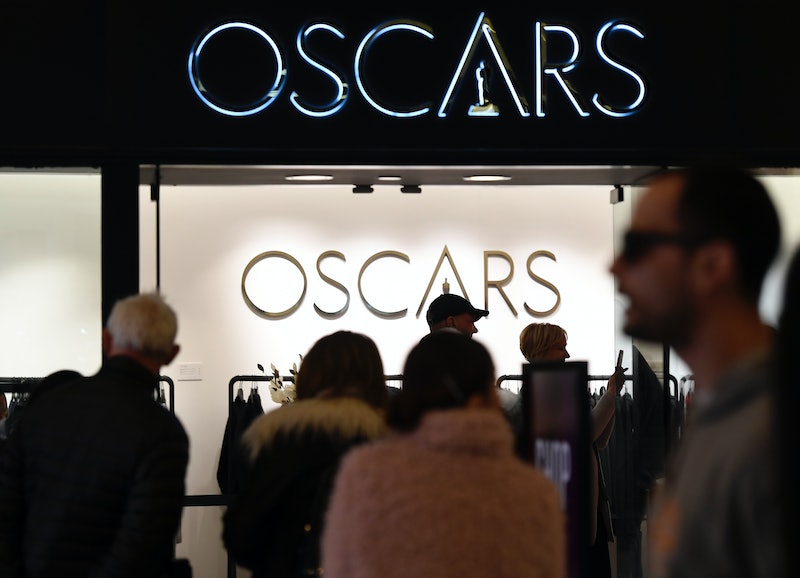 It seems like every year, discussion about the length of the Academy Awards ceremony comes up among viewers and the media alike, with many dismayed at the idea that it could possibly run longer than three hours. So how long will the 2019 Oscars be? That's the question on many people's minds, as the Academy is under more pressure than ever from ABC to deliver a tight, focused show that ends on schedule. But the answer is, as always: we won't know it's over until it's over.

There is only so much producers can do to control the length of an unwieldy live event like the Oscars. They can time the musical performances, the montages, the set changes — but they can't predict how long it will take a winner to hug their loved ones and get to the stage, or how often their presents might go off-script, or how rambling an acceptance speech is going to be.

That being said, the Academy is reportedly going to do its best to run a tight ship this year. "We are committed to a three-hour show," Academy President John Bailey told the Los Angeles Times in September 2018. "It’s necessary. I feel we have a responsibility to the people who watch that show in the Eastern time zone, which is a huge market, to have that show ended by 11. Nobody that I know of has protested about that."

Well, he's wrong on at least two counts there. Plenty of people have protested the idea of shortening the show, claiming that the idea of trying to cram the Oscars into a primetime-friendly three-hour box is anathema to the oversized glitz and glamor and perpetual sprawl of the event — an event which, after all, only happens once a year.

Bailey also proved wrong in his assumption that he had any say over how long the ceremony would or could be. Though he and the Academy's Board of Governors tried rolling out a series of changes designed to shorten the broadcast's runtime — including only performing two of the five Original Song nominees and cutting out four of the supposedly less "exciting" technical categories — every single one of those changes has since been walked back in the face of massive outcry among Oscar fans, industry professionals, and Academy members alike.

The only change that has stuck is one Bailey never intended: not having a host. When comedian Kevin Hart quit as Oscars host in December in the midst of controversy around homophobic jokes and tweets he'd made, the Academy was seemingly unable to find anyone else to take the job on such short notice. Without the time devoted to an opening monologue or segments where the host passes out pizza or shoots hotdogs or brings in busloads of tourists, that should help shorten the run time significantly.

But it probably won't be enough. Last weekend, when asked by the New York Times whether the 2019 ceremony was on track to come in at the three-hour mark, producer Donna Gigliotti responded simply, "The answer [is] no." Without the time-saving measures she, co-producer Glenn Weiss, and Bailey had brainstormed, it looks like the 91st annual Academy Awards will surpass 180 minutes.

But is that so unusual? The Oscars may have a reputation for being overlong, but the ceremonies typically fall into a pretty narrow window. In the last 10 years, the shortest ceremony (in 2012) was three hours and 13 minutes; the longest (last year) was three hours and 53 minutes. In the past 30 years, the ceremony has only exceeded the four-hour mark three times — and you have to go back 17 years to find the last time the show passed that benchmark.

Nor does it seem like length of show actually has any impact on ratings. The highest-rated broadcast in the history of the Oscars was in 1998, when Titanic took home Best Picture; that ceremony came in on the longer side, at three hours and 47 minutes, and yet pulled in a staggering 55 million viewers. The longest broadcast in modern history was in 2002, when A Beautiful Mind took home Best Picture; that ceremony earned a respectable 40.5 million viewers but clocked in at a whopping four hours and 23 minutes. (Hosted by Whoopi Goldberg, it is also one of the most fondly-remembered ceremonies in recent times.)

By contrast, things were tightened up considerably for the following year's ceremony, with the 2003 broadcast clocking in at three hours and 30 minutes, almost a full hour shorter — and yet ratings dropped considerably, to only 33 million viewers.

So if the length of the ceremony has practically no proven correlation to ratings, then why is the Academy so desperate to keep it short? ABC, which has an exclusive contract to broadcast the Oscars through 2028, is using the 2019 ceremony as a launching pad for its new drama series, Whiskey Cavalier, using the post-Oscars slot as a "special preview" for the show before premiering it in its usual Wednesday night time slot the following week. It's likely that ABC wants to get as many eyeballs on Whiskey Cavalier as possible, which means airing it at 11 p.m. ET so it finishes before midnight on the East Coast.

But there's another yearly television event that networks use as a launching pad for their programs: the Super Bowl, TV's highest-rated broadcast ever year. (The Oscars are the second.) The post-Super Bowl slot has been used to goose the ratings of such popular shows as Grey's Anatomy, Glee, The Voice, The Blacklist, and This Is Us. But no network has ever demanded that the NFL only air the "exciting" plays or cut overtime short just so East Coast viewers can get to bed by midnight. The same respect should be paid to the Oscars and its fans as well.